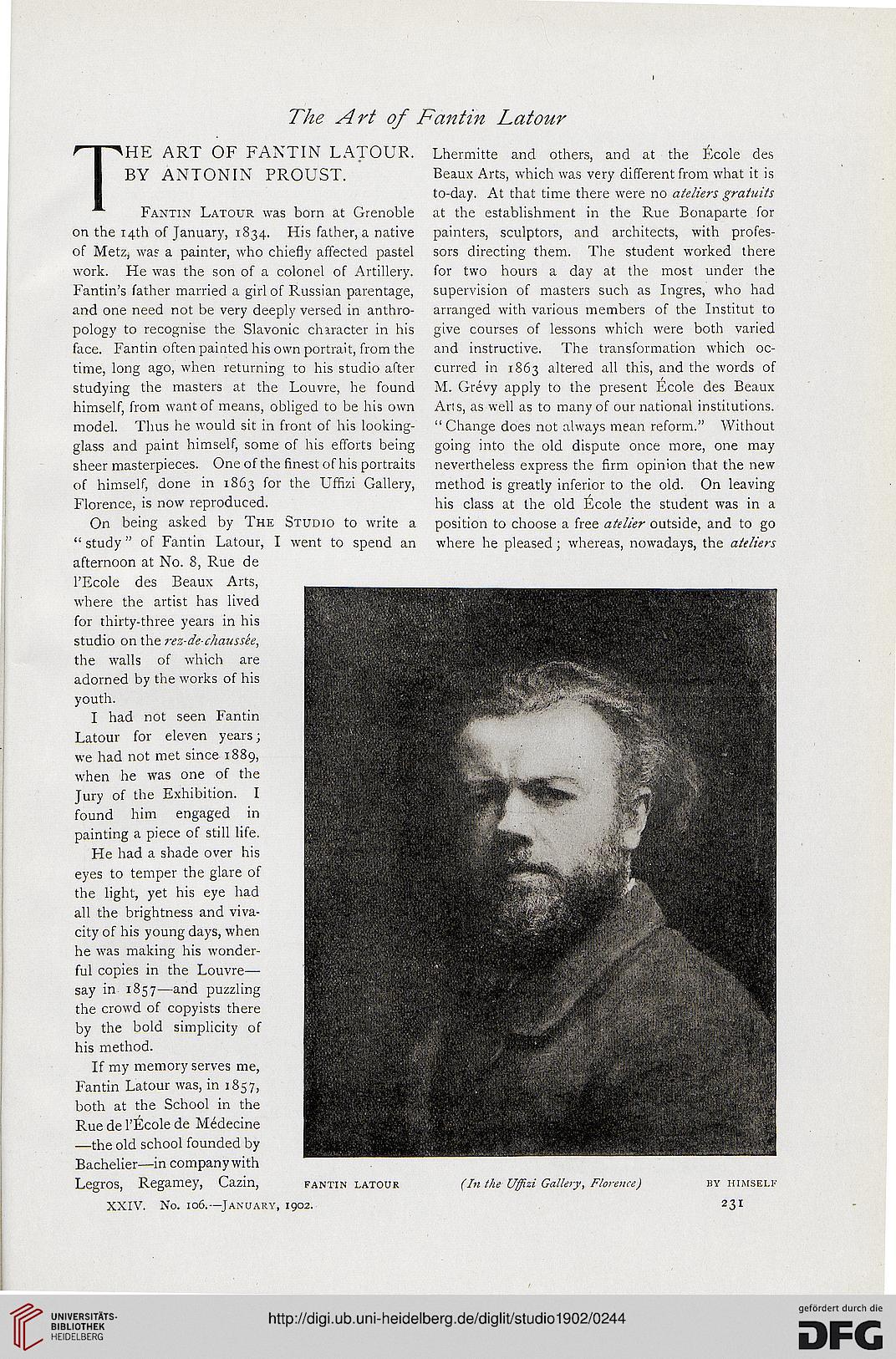 The Art of Fantin Latour

THE ART OF FANTIN LATOUR. Lhermitte and others, and at the Ecole des
BY ANTON IN PROUST. Beaux Arts, which was very different from what it is

to-day. At that time there were no ateliers graiuits
Fantin Latour was born at Grenoble at the establishment in the Rue Bonaparte for
on the 14th of January, 1834. His father, a native painters, sculptors, and architects, with profes-
of Metz, was a painter, who chiefly affected pastel sors directing them. The student worked there
work. He was the son of a colonel of Artillery. for two hours a day at the most under the
Fantin's father married a girl of Russian parentage, supervision of masters such as Ingres, who had
and one need not be very deeply versed in anthro- arranged with various members of the Institut to
pology to recognise the Slavonic character in his give courses of lessons which were both varied
face. Fantin often painted his own portrait, from the and instructive. The transformation which oc-
time, long ago, when returning to his studio after curred in 1863 altered all this, and the words of
studying the masters at the Louvre, he found M. Grevy apply to the present Ecole des Beaux
himself, from want of means, obliged to be his own Aris, as well as to many of our national institutions,
model. Thus he would sit in front of his looking- "Change does not always mean reform." Without
glass and paint himself, some of his efforts being going into the old dispute once more, one may
sheer masterpieces. One of the finest of his portraits nevertheless express the firm opinion that the new
of himself, done in 1863 for the Uffizi Gallery, method is greatly inferior to the old. On leaving
Florence, is now reproduced. his class at the old Ecole the student was in a

On being asked by The Studio to write a position to choose a free atelier outside, and to go
" study " of Fantin Latour, I went to spend an where he pleased; whereas, nowadays, the ateliers
afternoon at No. 8, Rue de
PEcole des Beaux Arts,
where the artist has lived
for thirty-three years in his
studio on the rez-de chaussee,
the walls of which are
adorned by the works of his
youth.

I had not seen Fantin
Latour for eleven years;
we had not met since 1889,
when he was one of the
Jury of the Exhibition. I
found him engaged in
painting a piece of still life.

He had a shade over his
eyes to temper the glare of
the light, yet his eye had
all the brightness and viva-
city of his young days, when
he was making his wonder-
ful copies in the Louvre—
say in 1857—and puzzling
the crowd of copyists there
by the bold simplicity of
his method.

If my memory serves me,
Fantin Latour was, in 1857,
both at the School in the
Rue de l'Ecole de Medecine
—the old school founded by
Bachelier—in company with