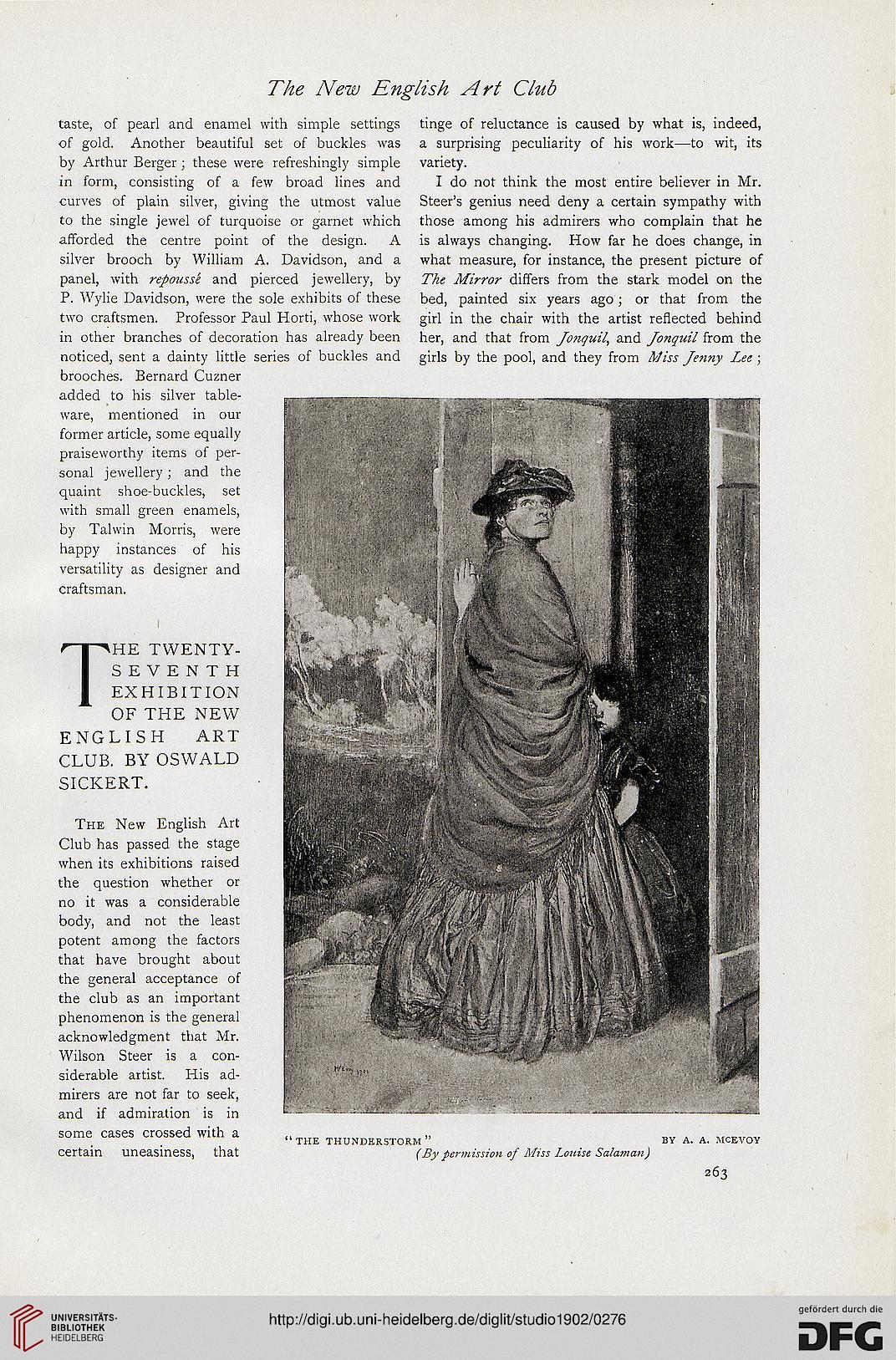 taste, of pearl and enamel with simple settings tinge of reluctance is caused by what is, indeed,
of gold. Another beautiful set of buckles was a surprising peculiarity of his work—to wit, its
by Arthur Berger ; these were refreshingly simple variety.

in form, consisting of a few broad lines and I do not think the most entire believer in Mr.
curves of plain silver, giving the utmost value Steer's genius need deny a certain sympathy with
to the single jewel of turquoise or garnet which those among his admirers who complain that he
afforded the centre point of the design. A is always changing. How far he does change, in
silver brooch by William A. Davidson, and a what measure, for instance, the present picture of
panel, with repousse and pierced jewellery, by The Mirror differs from the stark model on the
P. Wylie Davidson, were the sole exhibits of these bed, painted six years ago ; or that from the
two craftsmen. Professor Paul Horti, whose work girl in the chair with the artist reflected behind
in other branches of decoration has already been her, and that from Jonquil, and Jonquil from the
noticed, sent a dainty little series of buckles and girls by the pool, and they from Miss Jenny Lee ;
brooches. Bernard Cuzner
added to his silver table-
ware, mentioned in our
former article, some equally
praiseworthy items of per-
sonal jewellery ; and the
quaint shoe-buckles, set
with small green enamels,
by Talwin Morris, were
happy instances of his
versatility as designer and
craftsman.

THE TWENTY-
SEVENTH
EXHIBITION
OF THE NEW
ENGLISH ART
CLUB. BY OSWALD
SICKERT.

The New English Art
Club has passed the stage
when its exhibitions raised
the question whether or
no it was a considerable
body, and not the least
potent among the factors
that have brought about
the general acceptance of
the club as an important
phenomenon is the general
acknowledgment that Mr.
Wilson Steer is a con-
siderable artist. His ad-
mirers are not far to seek,
and if admiration is in
some cases crossed with a „ „„ . . „ ■___

" THE THUNDERSTORM BY A. A. MCEVOY

certain uneasiness, that (By permission of Miss Louise Salaman)