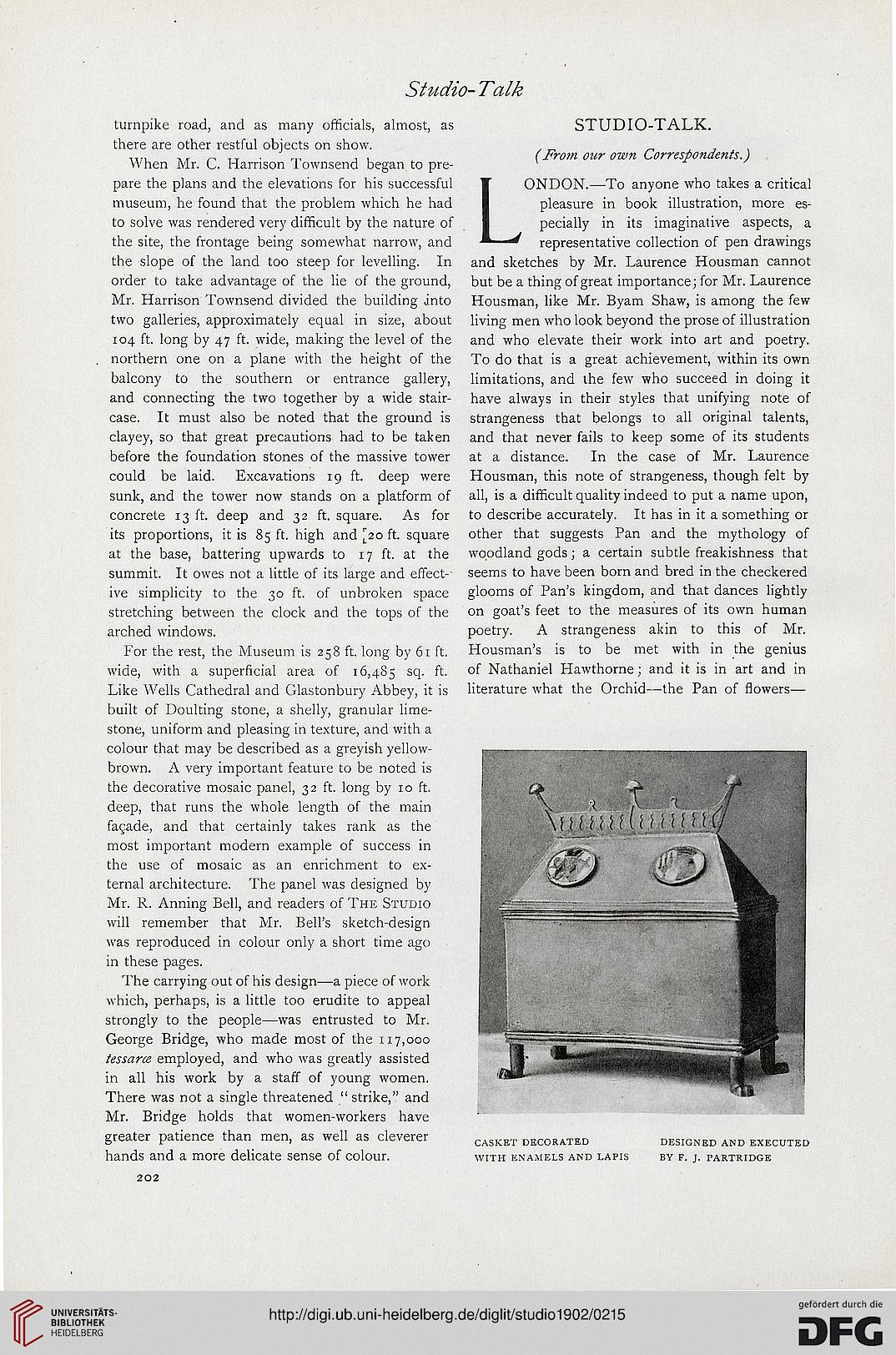 turnpike road, and as many officials, almost, as
there are other restful objects on show.

When Mr. C. Harrison Townsend began to pre-
pare the plans and the elevations for his successful
museum, he found that the problem which he had
to solve was rendered very difficult by the nature of
the site, the frontage being somewhat narrow, and
the slope of the land too steep for levelling. In
order to take advantage of the lie of the ground,
Mr. Harrison Townsend divided the building into
two galleries, approximately equal in size, about
104 ft. long by 47 ft. wide, making the level of the
northern one on a plane with the height of the
balcony to the southern or entrance gallery,
and connecting the two together by a wide stair-
case. It must also be noted that the ground is
clayey, so that great precautions had to be taken
before the foundation stones of the massive tower
could be laid. Excavations 19 ft. deep were
sunk, and the tower now stands on a platform of
concrete 13 ft. deep and 32 ft. square. As for
its proportions, it is 85 ft. high and [20 ft. square
at the base, battering upwards to 17 ft. at the
summit. It owes not a little of its large and effect-
ive simplicity to the 30 ft. of unbroken space
stretching between the clock and the tops of the
arched windows.

For the rest, the Museum is 258 ft. long by 61 ft.
wide, with a superficial area of 16,485 sq. ft.
Like Wells Cathedral and Glastonbury Abbey, it is
built of Doulting stone, a shelly, granular lime-
stone, uniform and pleasing in texture, and with a
colour that may be described as a greyish yellow-
brown. A very important feature to be noted is
the decorative mosaic panel, 32 ft. long by 10 ft.
deep, that runs the whole length of the main
facade, and that certainly takes rank as the
most important modern example of success in
the use of mosaic as an enrichment to ex-
ternal architecture. The panel was designed by
Mr. R. Anning Bell, and readers of The Studio
will remember that Mr. Bell's sketch-design
was reproduced in colour only a short time ago
in these pages.

The carrying out of his design—a piece of work
which, perhaps, is a little too erudite to appeal
strongly to the people—was entrusted to Mr.
George Bridge, who made most of the 117,000
tessarce employed, and who was greatly assisted
in all his work by a staff of young women.
There was not a single threatened " strike," and
Mr. Bridge holds that women-workers have
greater patience than men, as well as cleverer
hands and a more delicate sense of colour.
202

(From, our own Correspondents.)

LONDON.—To anyone who takes a critical
pleasure in book illustration, more es-
pecially in its imaginative aspects, a
representative collection of pen drawings
and sketches by Mr. Laurence Housman cannot
but be a thing of great importance; for Mr. Laurence
Housman, like Mr. Byam Shaw, is among the few
living men who look beyond the prose of illustration
and who elevate their work into art and poetry.
To do that is a great achievement, within its own
limitations, and the few who succeed in doing it
have always in their styles that unifying note of
strangeness that belongs to all original talents,
and that never fails to keep some of its students
at a distance. In the case of Mr. Laurence
Housman, this note of strangeness, though felt by
all, is a difficult quality indeed to put a name upon,
to describe accurately. It has in it a something or
other that suggests Pan and the mythology of
woodland gods; a certain subtle freakishness that
seems to have been born and bred in the checkered
glooms of Pan's kingdom, and that dances lightly
on goat's feet to the measures of its own human
poetry. A strangeness akin to this of Mr.
Housman's is to be met with in the genius
of Nathaniel Hawthorne; and it is in art and in
literature what the Orchid—the Pan of flowers—

WITH ENAMELS AND LAPIS BY F. J. TARTRIDGE