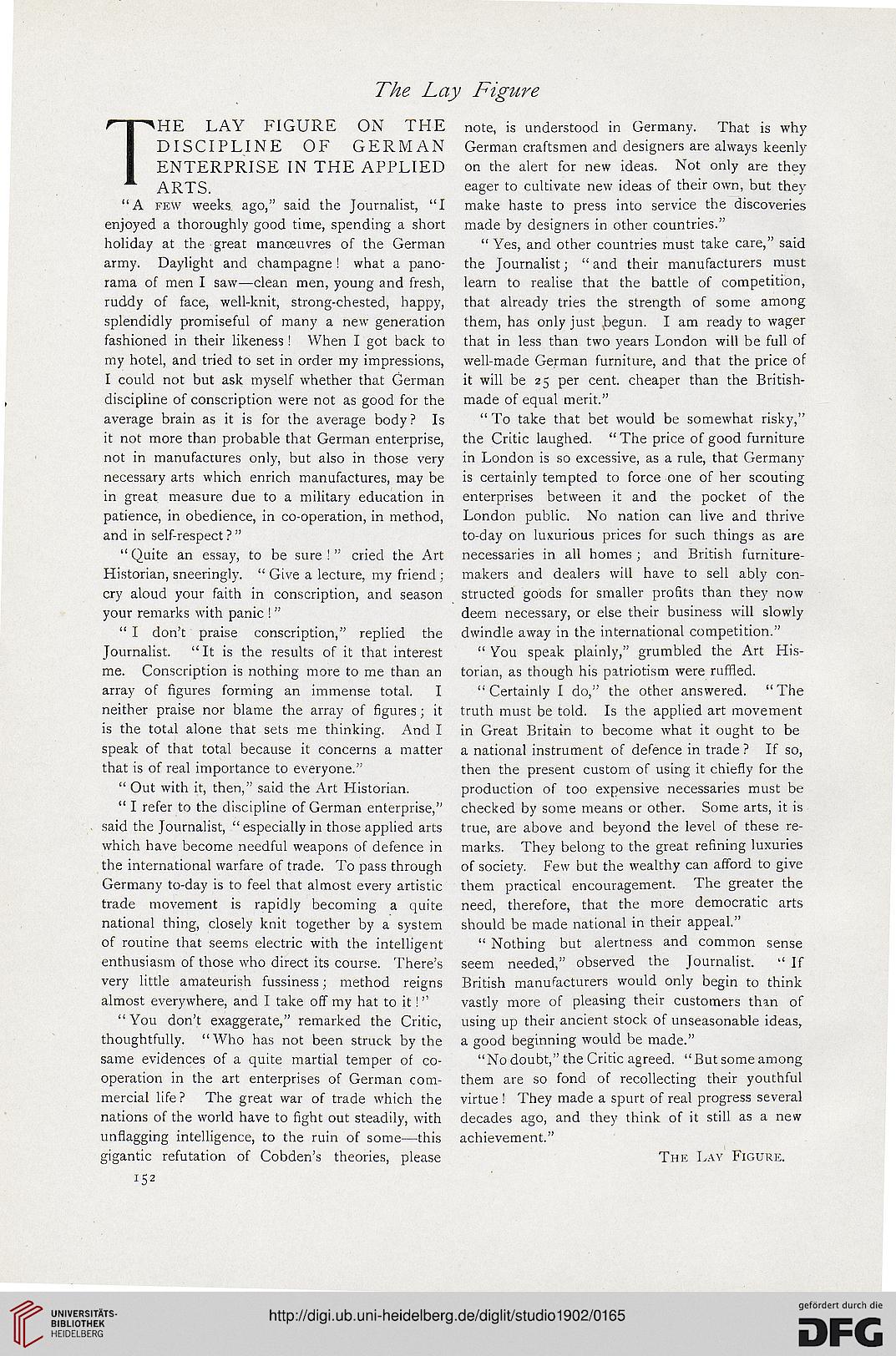 "A few weeks ago," said the Journalist, "I
enjoyed a thoroughly good time, spending a short
holiday at the great manoeuvres of the German
army. Daylight and champagne! what a pano-
rama of men I saw—clean men, young and fresh,
ruddy of face, well-knit, strong-chested, happy,
splendidly promiseful of many a new generation
fashioned in their likeness ! When I got back to
my hotel, and tried to set in order my impressions,
I could not but ask myself whether that German
discipline of conscription were not as good for the
average brain as it is for the average body? Is
it not more than probable that German enterprise,
not in manufactures only, but also in those very
necessary arts which enrich manufactures, may be
in great measure due to a military education in
patience, in obedience, in co-operation, in method,
and in self-respect ? "

" Quite an essay, to be sure ! " cried the Art
Historian, sneeringly. " Give a lecture, my friend ;
cry aloud your faith in conscription, and season
your remarks with panic ! "

" I don't praise conscription," replied the
Journalist. "It is the results of it that interest
me. Conscription is nothing more to me than an
array of figures forming an immense total. I
neither praise nor blame the array of figures; it
is the total alone that sets me thinking. And I
speak of that total because it concerns a matter
that is of real importance to everyone."

" Out with it, then," said the Art Historian.

" I refer to the discipline of German enterprise,"
said the Journalist, " especially in those applied arts
which have become needful weapons of defence in
the international warfare of trade. To pass through
Germany to-day is to feel that almost every artistic
trade movement is rapidly becoming a quite
national thing, closely knit together by a system
of routine that seems electric with the intelligent
enthusiasm of those who direct its course. There's
very little amateurish fussiness; method reigns
almost everywhere, and I take off my hat to it!"

" You don't exaggerate," remarked the Critic,
thoughtfully. "Who has not been struck by the
same evidences of a quite martial temper of co-
operation in the art enterprises of German com-
mercial life? The great war of trade which the
nations of the world have to fight out steadily, with
unflagging intelligence, to the ruin of some—this
gigantic refutation of Cobden's theories, please

note, is understood in Germany. That is why
German craftsmen and designers are always keenly
on the alert for new ideas. Not only are they
eager to cultivate new ideas of their own, but they
make haste to press into service the discoveries
made by designers in other countries."

" Yes, and other countries must take care," said
the Journalist; " and their manufacturers must
learn to realise that the battle of competition,
that already tries the strength of some among
them, has only just begun. I am ready to wager
that in less than two years London will be full of
well-made German furniture, and that the price of
it will be 25 per cent, cheaper than the British-
made of equal merit."

" To take that bet would be somewhat risky,"
the Critic laughed. " The price of good furniture
in London is so excessive, as a rule, that Germany
is certainly tempted to force one of her scouting
enterprises between it and the pocket of the
London public. No nation can live and thrive
to-day on luxurious prices for such things as are
necessaries in all homes ; and British furniture-
makers and dealers will have to sell ably con-
structed goods for smaller profits than they now
deem necessary, or else their business will slowly
dwindle away in the international competition."

" You speak plainly," grumbled the Art His-
torian, as though his patriotism were ruffled.

"Certainly I do," the other answered. "The
truth must be told. Is the applied art movement
in Great Britain to become what it ought to be
a national instrument of defence in trade ? If so,
then the present custom of using it chiefly for the
production of too expensive necessaries must be
checked by some means or other. Some arts, it is
true, are above and beyond the level of these re-
marks. They belong to the great refining luxuries
of society. Few but the wealthy can afford to give
them practical encouragement. The greater the
need, therefore, that the more democratic arts
should be made national in their appeal."

" Nothing but alertness and common sense
seem needed," observed the Journalist. " If
British manufacturers would only begin to think
vastly more of pleasing their customers than of
using up their ancient stock of unseasonable ideas,
a good beginning would be made."

"No doubt," the Critic agreed. "But some among
them are so fond of recollecting their youthful
virtue ! They made a spurt of real progress several
decades ago, and they think of it still as a new
achievement."