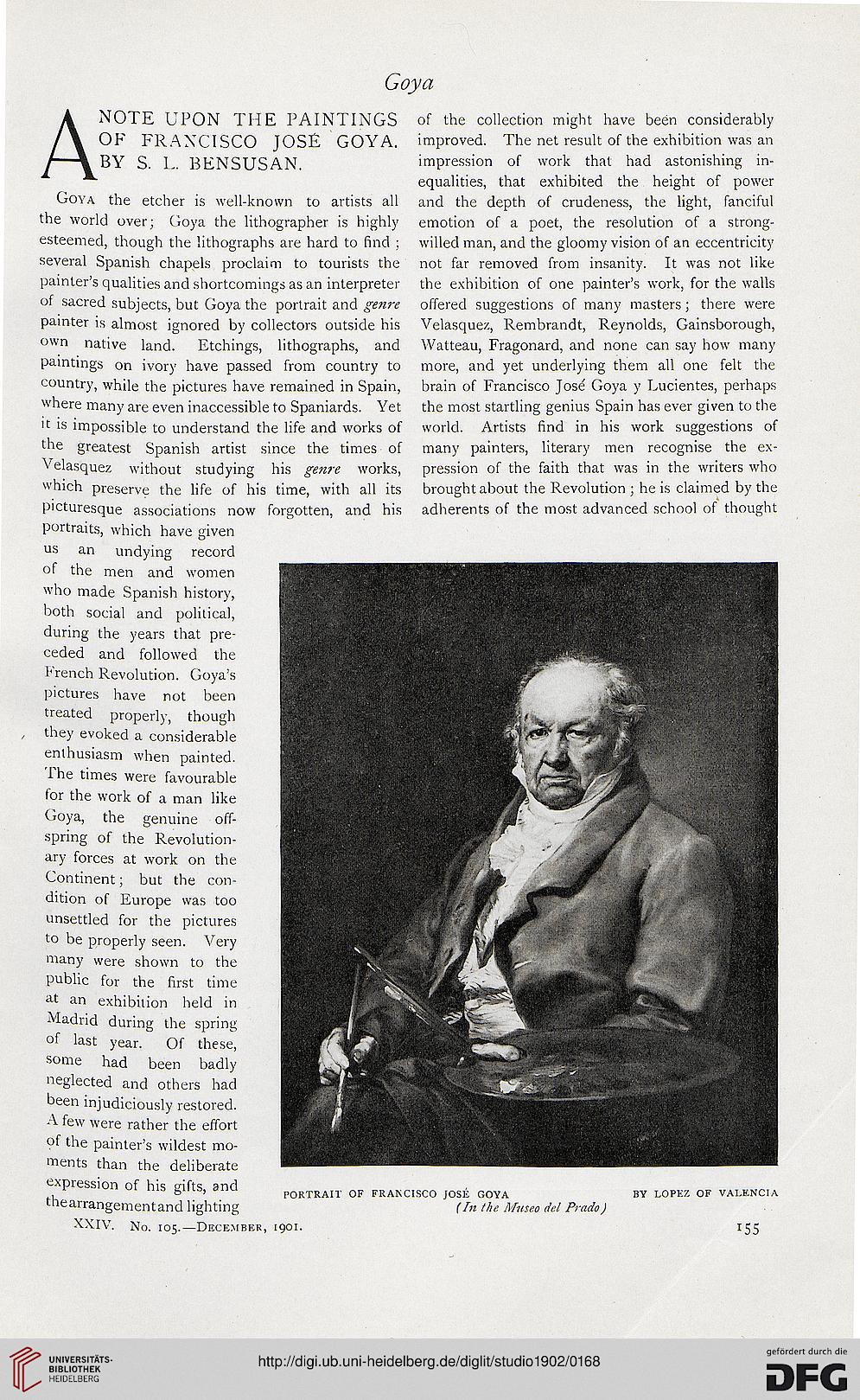 ANOTE UPON THE PAINTINGS of the collection might have been considerably
OF FRANCISCO JOSE GOYA, improved. The net result of the exh.bmon was an
RY 1 RFNSUSAN imPression of WOrk thal had astomS,™g m"

B\ S. L. BEN SUSAN. equalities, that exhibited the height of power

Goya the etcher is well-known to artists all and the depth of crudeness the light, fanciful
the world over; Goya the lithographer is highly emotion of a poet, the resolution of a strong-
esteemed, though the lithographs are hard to find ;. willed man, and the gloomy vision of an ^centn^
several Spanish chapels proclaim to tourists the not far removed from insan, y. It wa not hke
painter's qualities and shortcomings as an interpreter the exhibition of one punter s work, for the wahs
of sacred subjects, but Goya the portrait and genre offered suggestions of many masters;******
painter is almost ignored by collectors outside his Velasquez, Rembrandt, Reynolds, Gainstorough
own native land Etchings, lithographs, and Watteau, Fragonard, and none can, say ho* man
paintings on ivory have passed from country to more, and yet underlying them all one felt *e
country, while the pictures have remained in Spain, brain of Franasco Jose Goya y « ^
where many are even inaccessible to Spaniards. Yet the most starthng genius Spam
it is impossible to understand the life and works of world. Artists find u> his <"*"0^ °
the greatest Spanish artist since the times of many painters, literary men
Velasque. without studying his genre works, pression of the faith that was in the^rfers who

which preserve the life of his time, with all its b^^^*^^^"^^
picturesque associations now forgotten, and his adherents of the most advanced school of thought

portraits, which have given
us an undying record
of the men and women
who made Spanish history,
both social and political,
during the years that pre-
ceded and followed the
French Revolution. (Soya's
pictures have not been
treated properly, though
they evoked a considerable
enthusiasm when painted.
The times were favourable
for the work of a man like
(ioya, the genuine off-
spring of the Revolution-
ary forces at work on the
Continent; but the con-
dition of Europe was too

unsettled for the pictures

to be properly seen. Very

many were shown to the

public for the first time

at an exhibition held in

Madrid during the spring

of last year. Of these,

some had been badly

neglected and others had

A few were rather the effort

of the painter's wildest mo-
ments than the deliberate