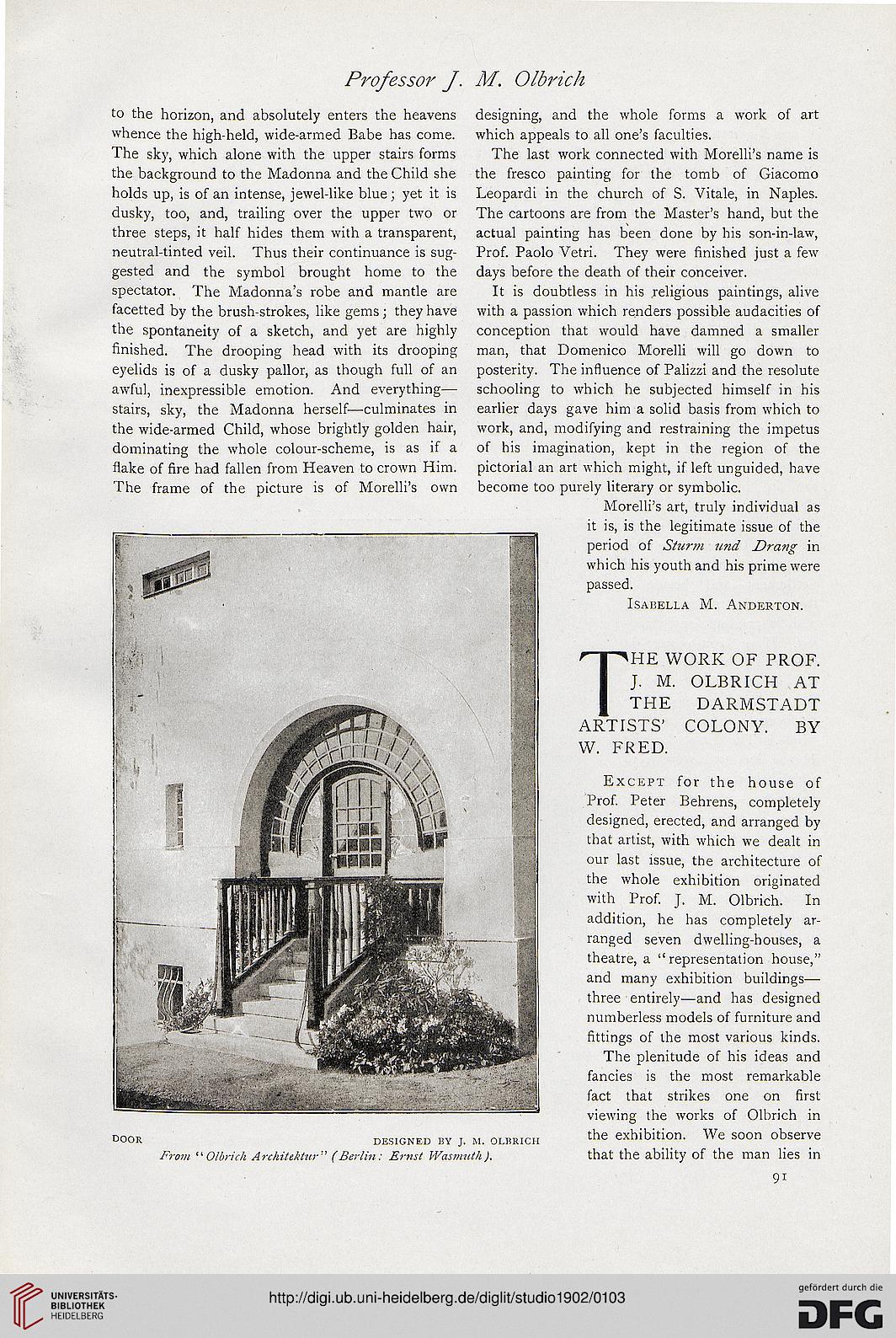 to the horizon, and absolutely enters the heavens designing, and the whole forms a work of art
whence the high-held, wide-armed Babe has come, which appeals to all one's faculties.
The sky, which alone with the upper stairs forms The last work connected with Morelli's name is
the background to the Madonna and the Child she the fresco painting for the tomb of Giacomo
holds up, is of an intense, jewel-like blue; yet it is Leopardi in the church of S. Vitale, in Naples,
dusky, too, and, trailing over the upper two or The cartoons are from the Master's hand, but the
three steps, it half hides them with a transparent, actual painting has been done by his son-in-law,
neutral-tinted veil. Thus their continuance is sug- Prof. Paolo Vetri. They were finished just a few
gested and the symbol brought home to the days before the death of their conceiver.
spectator. The Madonna's robe arid mantle are It is doubtless in his religious paintings, alive
facetted by the brush-strokes, like gems; they have with a passion which renders possible audacities of
the spontaneity of a sketch, and yet are highly conception that would have damned a smaller
finished. The drooping head with its drooping man, that Domenico Morelli will go down to
eyelids is of a dusky pallor, as though full of an posterity. The influence of Palizzi and the resolute
awful, inexpressible emotion. And everything— schooling to which he subjected himself in his
stairs, sky, the Madonna herself—culminates in earlier days gave him a solid basis from which to
the wide-armed Child, whose brightly golden hair, work, and, modifying and restraining the impetus
dominating the whole colour-scheme, is as if a of his imagination, kept in the region of the
flake of fire had fallen from Heaven to crown Him. pictorial an art which might, if left unguided, have
The frame of the picture is of Morelli's own become too purely literary or symbolic.

Morelli's art, truly individual as
it is, is the legitimate issue of the
period of Sturm und Drang in
which his youth and his prime were
passed.

THE WORK OF PROF.
J. M. OLBRICH AT
THE DARMSTADT
ARTISTS' COLONY. BY
W. FRED.

Except for the house of
Prof. Peter Behrens, completely
designed, erected, and arranged by
that artist, with which we dealt in
our last issue, the architecture of
the whole exhibition originated
with Prof. J. M. Olbrich. In
addition, he has completely ar-
ranged seven dwelling-houses, a
theatre, a "representation house,"
and many exhibition buildings—
three entirely—and has designed
numberless models of furniture and
fittings of the most various kinds.

The plenitude of his ideas and
fancies is the most remarkable
fact that strikes one on first
viewing the works of Olbrich in
designed by j. m. olbrich the exhibition. We soon observe

From "Olbrich Architektur" (Berlin: Ernst Wasmuth). that the ability of the man lies in