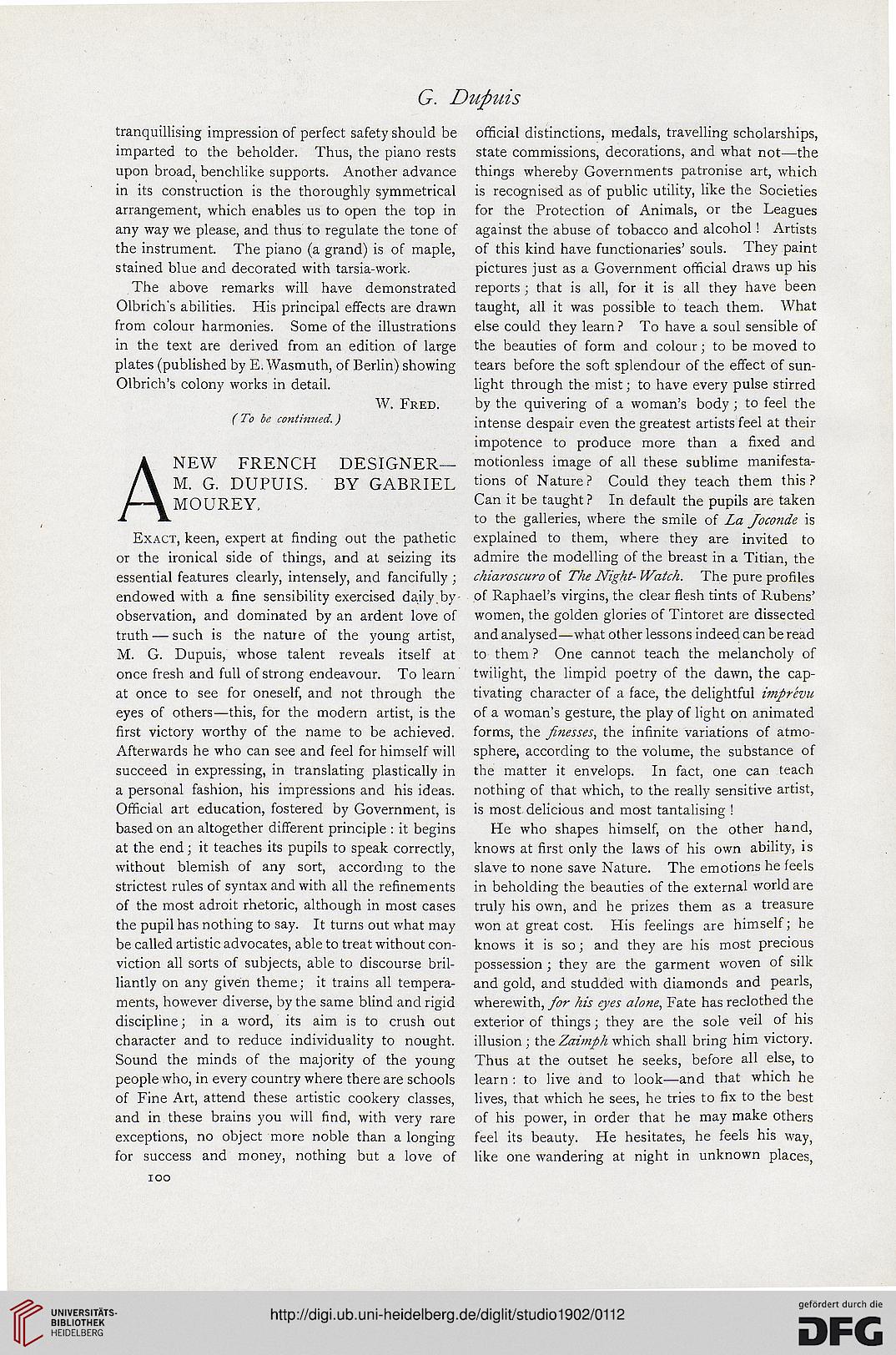 tranquillising impression of perfect safety should be
imparted to the beholder. Thus, the piano rests
upon broad, benchlike supports. Another advance
in its construction is the thoroughly symmetrical
arrangement, which enables us to open the top in
any way we please, and thus to regulate the tone of
the instrument. The piano (a grand) is of maple,
stained blue and decorated with tarsia-work.

The above remarks will have demonstrated
01brich"s abilities. His principal effects are drawn
from colour harmonies. Some of the illustrations
in the text are derived from an edition of large
plates (published by E. Wasmuth, of Berlin) showing
Olbrich's colony works in detail.

Exact, keen, expert at finding out the pathetic
or the ironical side of things, and at seizing its
essential features clearly, intensely, and fancifully ;
endowed with a fine sensibility exercised daily by
observation, and dominated by an ardent love of
truth — such is the nature of the young artist,
M. G. Dupuis, whose talent reveals itself at
once fresh and full of strong endeavour. To learn
at once to see for oneself, and not through the
eyes of others—this, for the modern artist, is the
first victory worthy of the name to be achieved.
Afterwards he who can see and feel for himself will
succeed in expressing, in translating plastically in
a personal fashion, his impressions and his ideas.
Official art education, fostered by Government, is
based on an altogether different principle : it begins
at the end; it teaches its pupils to speak correctly,
without blemish of any sort, according to the
strictest rules of syntax and with all the refinements
of the most adroit rhetoric, although in most cases
the pupil has nothing to say. It turns out what may
be called artistic advocates, able to treat without con-
viction all sorts of subjects, able to discourse bril-
liantly on any given theme; it trains all tempera-
ments, however diverse, by the same blind and rigid
discipline; in a word, its aim is to crush out
character and to reduce individuality to nought.
Sound the minds of the majority of the young
people who, in every country where there are schools
of Fine Art, attend these artistic cookery classes,
and in these brains you will find, with very rare
exceptions, no object more noble than a longing
for success and money, nothing but a love of
100

official distinctions, medals, travelling scholarships,
state commissions, decorations, and what not—the
things whereby Governments patronise art, which
is recognised as of public utility, like the Societies
for the Protection of Animals, or the Leagues
against the abuse of tobacco and alcohol ! Artists
of this kind have functionaries' souls. They paint
pictures just as a Government official draws up his
reports ; that is all, for it is all they have been
taught, all it was possible to teach them. What
else could they learn ? To have a soul sensible of
the beauties of form and colour; to be moved to
tears before the soft splendour of the effect of sun-
light through the mist; to have every pulse stirred
by the quivering of a woman's body ; to feel the
intense despair even the greatest artists feel at their
impotence to produce more than a fixed and
motionless image of all these sublime manifesta-
tions of Nature? Could they teach them this?
Can it be taught ? In default the pupils are taken
to the galleries, where the smile of La Joconde is
explained to them, where they are invited to
admire the modelling of the breast in a Titian, the
chiaroscuro of The Night-Watch. The pure profiles
of Raphael's virgins, the clear flesh tints of Rubens'
women, the golden glories of Tintoret are dissected
and analysed—what other lessons indeed can be read
to them ? One cannot teach the melancholy of
twilight, the limpid poetry of the dawn, the cap-
tivating character of a face, the delightful imprevu
of a woman's gesture, the play of light on animated
forms, the finesses, the infinite variations of atmo-
sphere, according to the volume, the substance of
the matter it envelops. In fact, one can teach
nothing of that which, to the really sensitive artist,
is most delicious and most tantalising !

He who shapes himself, on the other hand,
knows at first only the laws of his own ability, is
slave to none save Nature. The emotions he feels
in beholding the beauties of the external world are
truly his own, and he prizes them as a treasure
won at great cost. His feelings are himself; he
knows it is so; and they are his most precious
possession ; they are the garment woven of silk
and gold, and studded with diamonds and pearls,
wherewith, for his eyes alone, Fate hasreclothed the
exterior of things; they are the sole veil of his
illusion ; the Zaimph which shall bring him victory.
Thus at the outset he seeks, before all else, to
learn : to live and to look—and that which he
lives, that which he sees, he tries to fix to the best
of his power, in order that he may make others
feel its beauty. He hesitates, he feels his way,
like one wandering at night in unknown places,