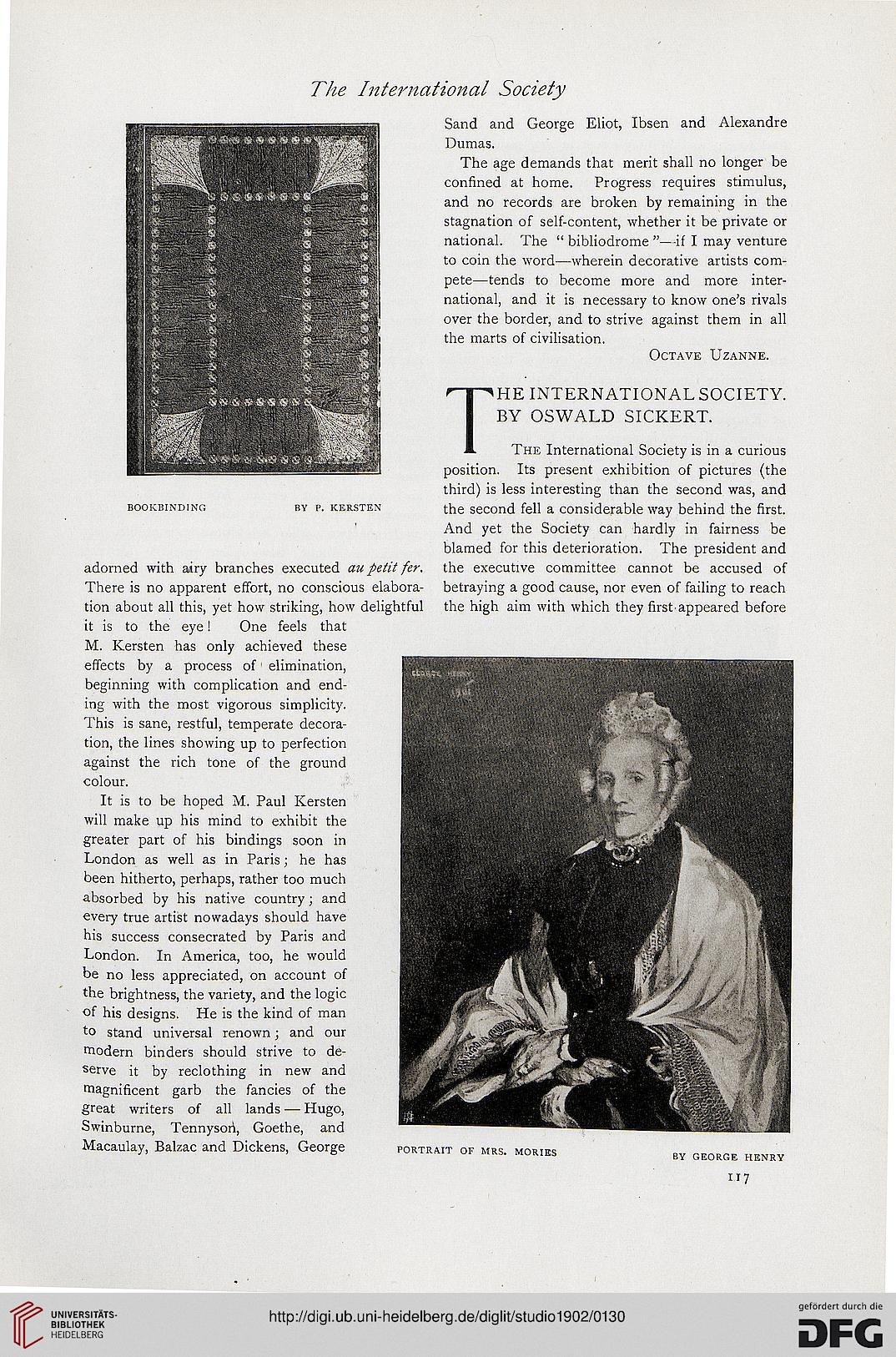 The age demands that merit shall no longer be
confined at home. Progress requires stimulus,
and no records are broken by remaining in the
stagnation of self-content, whether it be private or
national. The " bibliodrome "—if I may venture
to coin the word—wherein decorative artists com-
pete—tends to become more and more inter-
national, and it is necessary to know one's rivals
over the border, and to strive against them in all
the marts of civilisation.

HE INTERNATIONALSOCIETY.
BY OSWALD SICKERT.

The International Society is in a curious
position. Its present exhibition of pictures (the
third) is less interesting than the second was, and
bookbinding by p. kersten the second fell a considerable way behind the first.

And yet the Society can hardly in fairness be
blamed for this deterioration. The president and
adorned with airy branches executed mi petit fer. the executive committee cannot be accused of
There is no apparent effort, no conscious elabora- betraying a good cause, nor even of failing to reach
tion about all this, yet how striking, how delightful the high aim with which they first appeared before
it is to the eye! One feels that
M. Kersten has only achieved these
effects by a process of elimination,
beginning with complication and end-
ing with the most vigorous simplicity.
This is sane, restful, temperate decora-
tion, the lines showing up to perfection
against the rich tone of the ground
colour.

It is to be hoped M. Paul Kersten
will make up his mind to exhibit the
greater part of his bindings soon in
London as well as in Paris; he has
been hitherto, perhaps, rather too much
absorbed by his native country; and
every true artist nowadays should have
his success consecrated by Paris and
London. In America, too, he would
be no less appreciated, on account of
the brightness, the variety, and the logic
of his designs. He is the kind of man
to stand universal renown; and our
modern binders should strive to de-
serve it by reclothing in new and
magnificent garb the fancies of the
great writers of all lands — Hugo,
Swinburne, Tennyson, Goethe, and
Macaulay, Balzac and Dickens, George portrait of mrs. mories by c.eorge henry