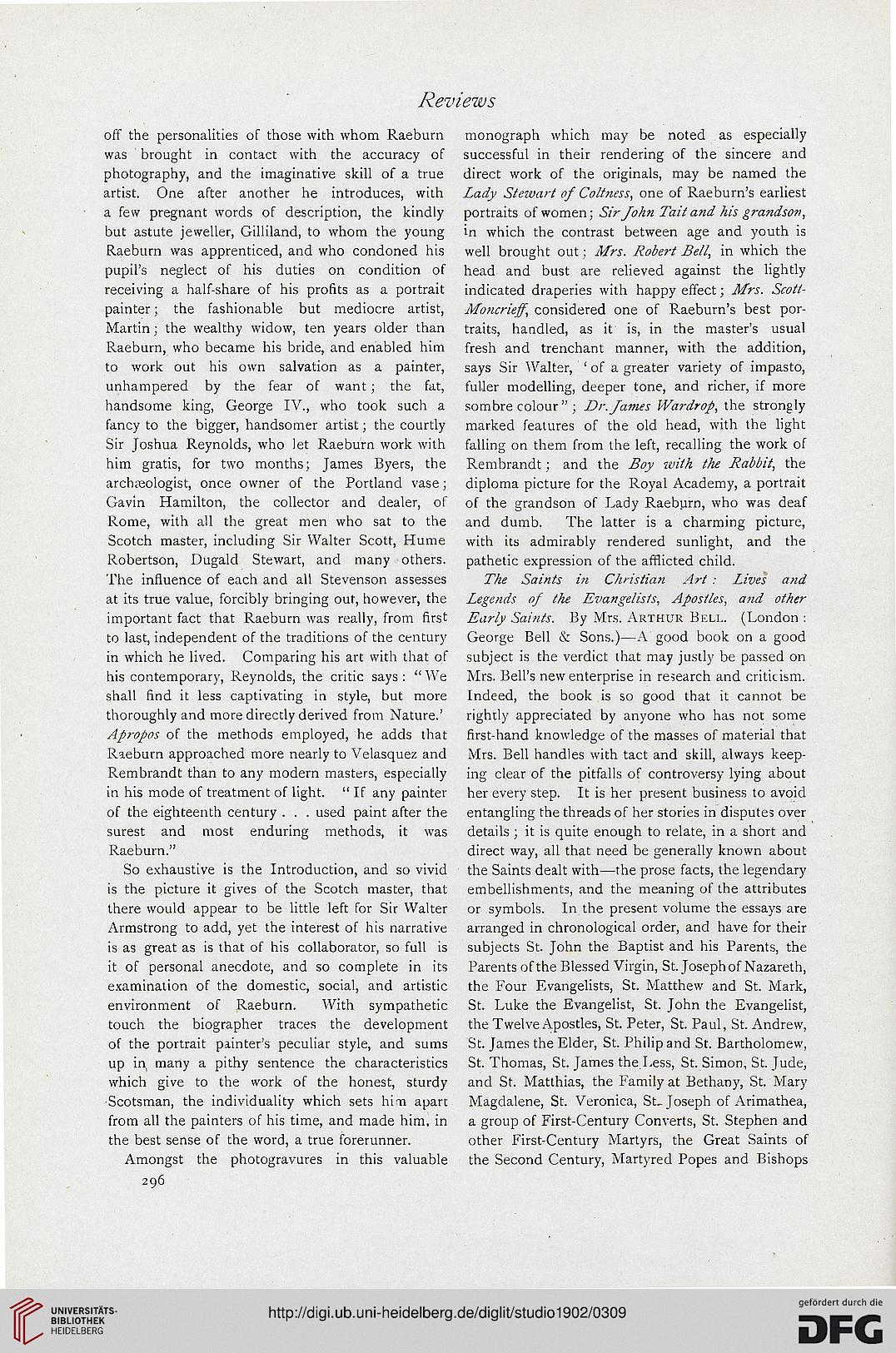 off the personalities of those with whom Raeburn
was brought in contact with the accuracy of
photography, and the imaginative skill of a true
artist. One after another he introduces, with
a few pregnant words of description, the kindly
but astute jeweller, Gilliland, to whom the young
Raeburn was apprenticed, and who condoned his
pupil's neglect of his duties on condition of
receiving a half-share of his profits as a portrait
painter; the fashionable but mediocre artist,
Martin; the wealthy widow, ten years older than
Raeburn, who became his bride, and enabled him
to work out his own salvation as a painter,
unhampered by the fear of want ; the fat,
handsome king, George IV., who took such a
fancy to the bigger, handsomer artist; the courtly
Sir Joshua Reynolds, who let Raeburn work with
him gratis, for two months; James Byers, the
archaeologist, once owner of the Portland vase;
Gavin Hamilton, the collector and dealer, of
Rome, with all the great men who sat to the
Scotch master, including Sir Walter Scott, Hume
Robertson, Dugald Stewart, and many others.
The influence of each and all Stevenson assesses
at its true value, forcibly bringing out, however, the
important fact that Raeburn was really, from first
to last, independent of the traditions of the century
in which he lived. Comparing his art with that of
his contemporary, Reynolds, the critic says : " We
shall find it less captivating in style, but more
thoroughly and more directly derived from Nature.'
Apropos of the methods employed, he adds that
Raeburn approached more nearly to Velasquez and
Rembrandt than to any modern masters, especially
in his mode of treatment of light. " If any painter
of the eighteenth century . . . used paint after the
surest and most enduring methods, it was
Raeburn."

So exhaustive is the Introduction, and so vivid
is the picture it gives of the Scotch master, that
there would appear to be little left for Sir Walter
Armstrong to add, yet the interest of his narrative
is as great as is that of his collaborator, so full is
it of personal anecdote, and so complete in its
examination of the domestic, social, and artistic
environment of Raeburn. With sympathetic
touch the biographer traces the development
of the portrait painter's peculiar style, and sums
up in, many a pithy sentence the characteristics
which give to the work of the honest, sturdy
Scotsman, the individuality which sets him apart
from all the painters of his time, and made him, in
the best sense of the word, a true forerunner.

Amongst the photogravures in this valuable
296

monograph which may be noted as especially
successful in their rendering of the sincere and
direct work of the originals, may be named the
Lady Steivart of Coltness, one of Raeburn's earliest
portraits of women; Sir John Tait and his grandson,
in which the contrast between age and youth is
well brought out : Mrs. Robert Bell, in which the
head and bust are relieved against the lightly
indicated draperies with happy effect; Mrs. Scotl-
Moncrieff, considered one of Raeburn's best por-
traits, handled, as it is, in the master's usual
fresh and trenchant manner, with the addition,
says Sir Walter, ' of a greater variety of impasto,
fuller modelling, deeper tone, and richer, if more
sombre colour " ; Dr. James Wardrop, the strongly
marked features of the old head, with the light
falling on them from the left, recalling the work of
Rembrandt; and the Boy with the Rabbit, the
diploma picture for the Royal Academy, a portrait
of the grandson of Lady Raeburn, who was deaf
and dumb. The latter is a charming picture,
with its admirably rendered sunlight, and the
pathetic expression of the afflicted child.

The Saints in Christian Art : Lives and
Legends of the Evangelists, Apostles, and other
Early Saints. By Mrs. Arthur Bell. (London :
George Bell & Sons.)—A good book on a good
subject is the verdict that may justly be passed on
Mrs. Bell's new enterprise in research and criticism.
Indeed, the book is so good that it cannot be
rightly appreciated by anyone who has not some
first-hand knowledge of the masses of material that
Mrs. Bell handles with tact and skill, always keep-
ing clear of the pitfalls of controversy lying about
her every step. It is her present business to avoid
entangling the threads of her stories in disputes over
details ; it is quite enough to relate, in a short and
direct way, all that need be generally known about
the Saints dealt with—the prose facts, the legendary
embellishments, and the meaning of the attributes
or symbols. In the present volume the essays are
arranged in chronological order, and have for their
subjects St. John the Baptist and his Parents, the
Parents of the Blessed Virgin, St. Joseph of Nazareth,
the Four Evangelists, St. Matthew and St. Mark,
St. Luke the Evangelist, St. John the Evangelist,
the Twelve Apostles, St. Peter, St. Paul, St. Andrew,
St. James the Elder, St. Philip and St. Bartholomew,
St. Thomas, St. James the Less, St. Simon, St. Jude,
and St. Matthias, the Family at Bethany, St. Mary
Magdalene, St. Veronica, St- Joseph of Arimathea,
a group of First-Century Converts, St. Stephen and
other First-Century Martyrs, the Great Saints of
the Second Century, Martyred Popes and Bishops