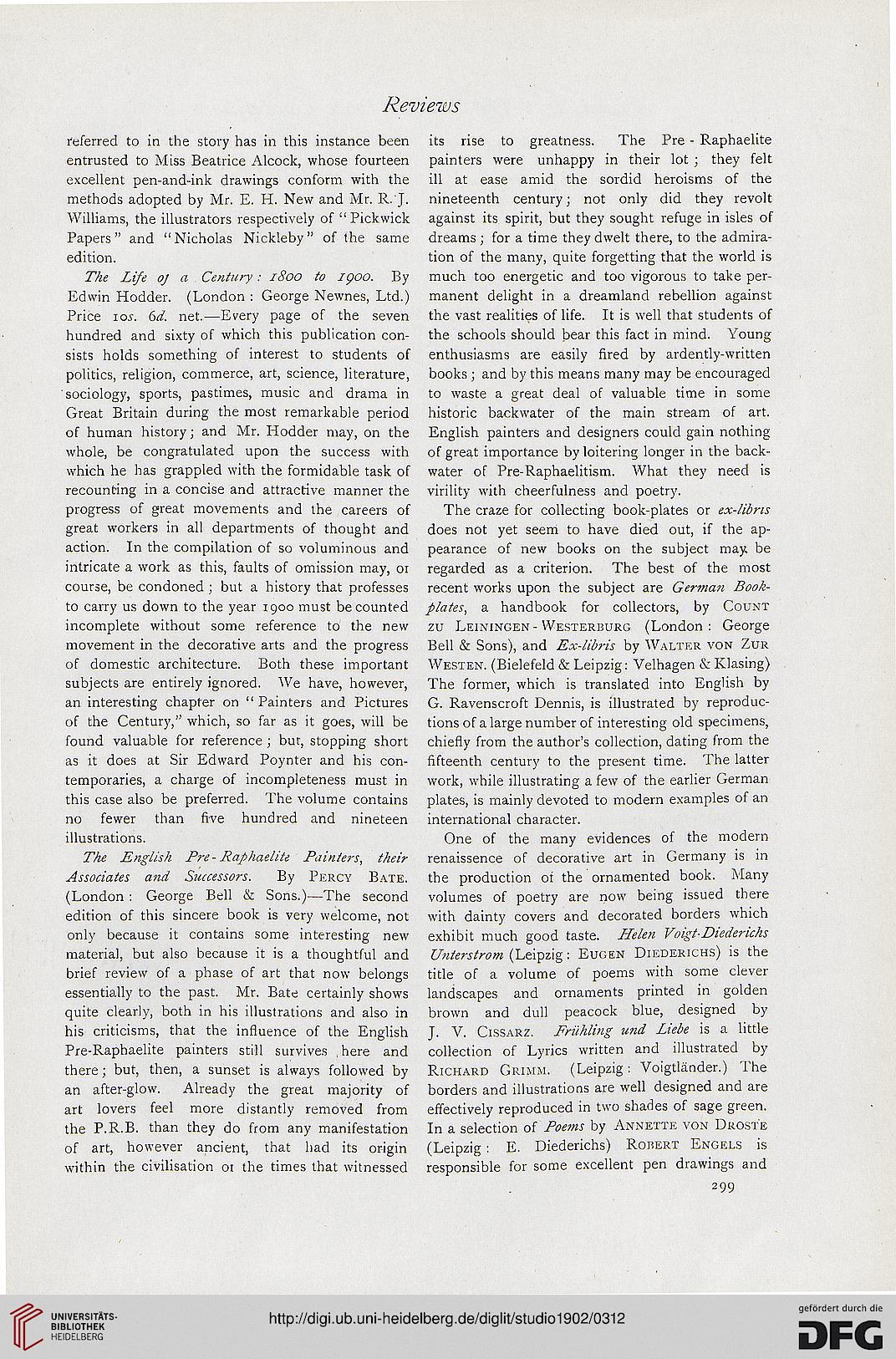 referred to in the story has in this instance been
entrusted to Miss Beatrice Alcock, whose fourteen
excellent pen-and-ink drawings conform with the
methods adopted by Mr. E. H. New and Mr. R.'J.
Williams, the illustrators respectively of "Pickwick
Papers" and " Nicholas Nickleby" of the same
edition.

The Life oj a Century : 1800 to ipoo. By
Edwin Hodder. (London : George Newnes, Ltd.)
Price 10s. 6d. net.—Every page of the seven
hundred and sixty of which this publication con-
sists holds something of interest to students of
politics, religion, commerce, art, science, literature,
sociology, sports, pastimes, music and drama in
Great Britain during the most remarkable period
of human history; and Mr. Hodder may, on the
whole, be congratulated upon the success with
which he has grappled with the formidable task of
recounting in a concise and attractive manner the
progress of great movements and the careers of
great workers in all departments of thought and
action. In the compilation of so voluminous and
intricate a work as this, faults of omission may, 01
course, be condoned ; but a history that professes
to carry us down to the year 1900 must be counted
incomplete without some reference to the new
movement in the decorative arts and the progress
of domestic architecture. Both these important
subjects are entirely ignored. We have, however,
an interesting chapter on " Painters and Pictures
of the Century," which, so far as it goes, will be
found valuable for reference ; but, stopping short
as it does at Sir Edward Poynter and his con-
temporaries, a charge of incompleteness must in
this case also be preferred. The volume contains
no fewer than five hundred and nineteen
illustrations.

The English Pre-Raphaelite Painters, their
Associates and Successors. By Percy Bate.
(London : George Bell & Sons.)—The second
edition of this sincere book is very welcome, not
only because it contains some interesting new
material, but also because it is a thoughtful and
brief review of a phase of art that now belongs
essentially to the past. Mr. Bate certainly shows
quite clearly, both in his illustrations and also in
his criticisms, that the influence of the English
Pre-Raphaelite painters still survives here and
there; but, then, a sunset is always followed by
an after-glow. Already the great majority of
art lovers feel more distantly removed from
the P.R.B. than they do from any manifestation
of art, however ancient, that had its origin
within the civilisation 01 the times that witnessed

its rise to greatness. The Pre - Raphaelite
painters were unhappy in their lot ; they felt
ill at ease amid the sordid heroisms of the
nineteenth century; not only did they revolt
against its spirit, but they sought refuge in isles of
dreams ; for a time they dwelt there, to the admira-
tion of the many, quite forgetting that the world is
much too energetic and too vigorous to take per-
manent delight in a dreamland rebellion against
the vast realities of life. It is well that students of
the schools should bear this fact in mind. Young
enthusiasms are easily fired by ardently-written
books ; and by this means many may be encouraged
to waste a great deal of valuable time in some
historic backwater of the main stream of art.
English painters and designers could gain nothing
of great importance by loitering longer in the back-
water of Pre-Raphaelitism. What they need is
virility with cheerfulness and poetry.

The craze for collecting book-plates or ex-libns
does not yet seem to have died out, if the ap-
pearance of new books on the subject may, be
regarded as a criterion. The best of the most
recent works upon the subject are German Book-
plates, a handbook for collectors, by Count
zu Leiningen - Westerburg (London: George
Bell & Sons), and Ex-libris by Walter von Zur
Westen. (Bielefeld & Leipzig: Velhagen & Klasing)
The former, which is translated into English by
G. Ravenscroft Dennis, is illustrated by reproduc-
tions of a large number of interesting old specimens,
chiefly from the author's collection, dating from the
fifteenth century to the present time. The latter
work, while illustrating a few of the earlier German
plates, is mainly devoted to modern examples of an
international character.

One of the many evidences of the modern
renaissence of decorative art in Germany is in
the production ot the ornamented book. Many
volumes of poetry are now being issued there
with dainty covers and decorated borders which
exhibit much good taste. Helen Voigt-Diederichs
Unterstrom (Leipzig: Eugen Diederichs) is the
title of a volume of poems with some clever
landscapes and ornaments printed in golden
brown ana dull peacock blue, designed by
J. V. Cissarz. FHlhling und Liebe is a little
collection of Lyrics written and illustrated by
Richard Grimm. (Leipzig: Voigtlander.) The
borders and illustrations are well designed and are
effectively reproduced in two shades of sage green.
In a selection of Poems by Annette von Droste
(Leipzig: E. Diederichs) Robert Engels is
responsible for some excellent pen drawings and