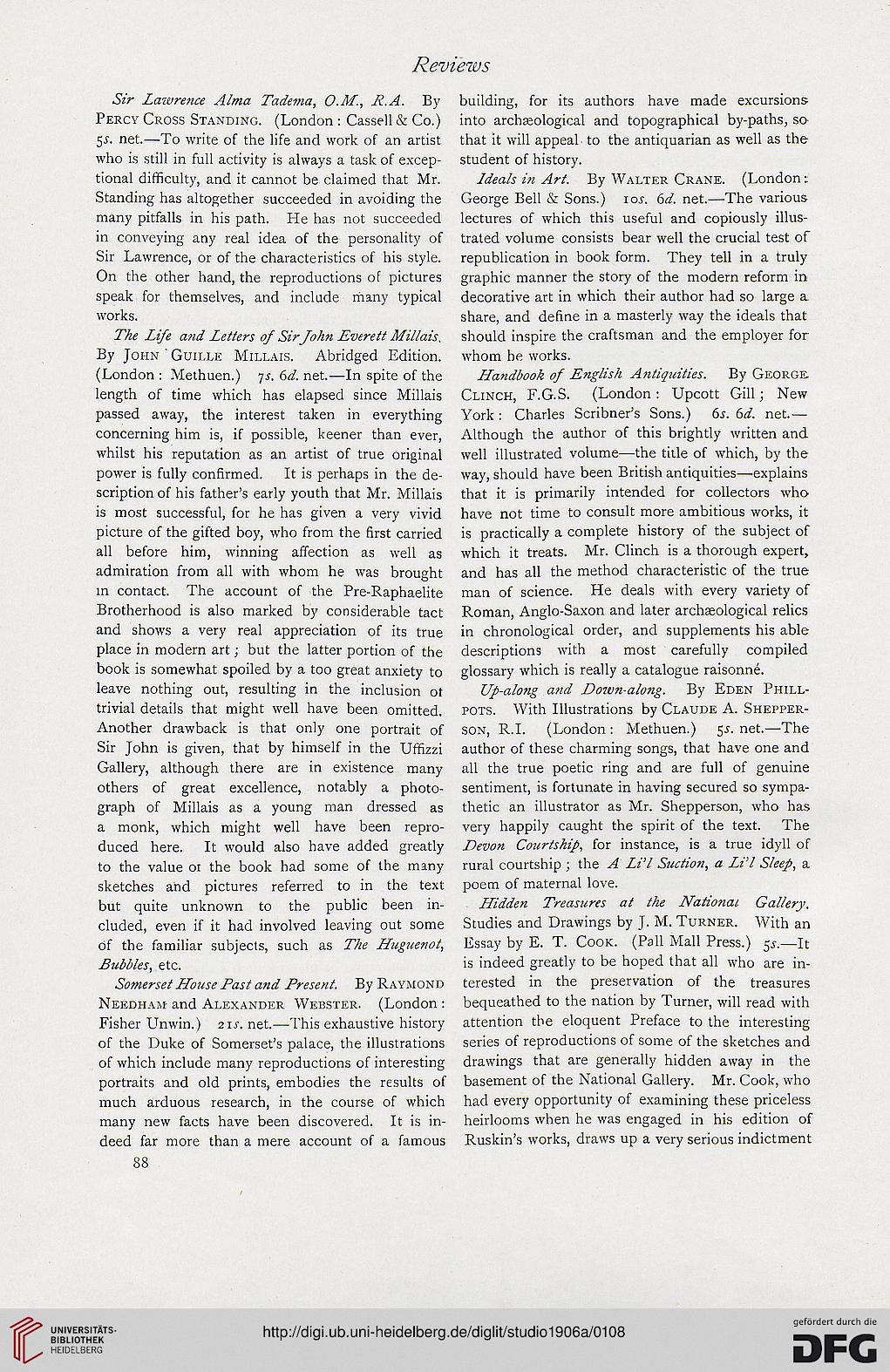 Sir Lawrence Alma Tadema, O.M., R.A. By
Percy Cross Standing. (London : Cassell & Co.)
5-r. net.—To write of the life and work of an artist
who is still in full activity is always a task of excep-
tional difficulty, and it cannot be claimed that Mr.
Standing has altogether succeeded in avoiding the
many pitfalls in his path. He has not succeeded
in conveying any real idea of the personality of
Sir Lawrence, or of the characteristics of his style.
On the other hand, the reproductions of pictures
speak for themselves, and include many typical
works.

The Life and Letters of Sir John Everett Millais.
By John Guille Millais. Abridged Edition.
(London : Methuen.) js. 6d. net.—In spite of the
length of time which has elapsed since Millais
passed away, the interest taken in everything
concerning him is, if possible, keener than ever,
whilst his reputation as an artist of true original
power is fully confirmed. It is perhaps in the de-
scription of his father's early youth that Mr. Millais
is most successful, for he has given a very vivid
picture of the gifted boy, who from the first carried
all before him, winning affection as well as
admiration from all with whom he was brought
in contact. The account of the Pre-Raphaelite
Brotherhood is also marked by considerable tact
and shows a very real appreciation of its true
place in modern art; but the latter portion of the
book is somewhat spoiled by a too great anxiety to
leave nothing out, resulting in the inclusion ot
trivial details that might well have been omitted.
Another drawback is that only one portrait of
Sir John is given, that by himself in the Uffizzi
Gallery, although there are in existence many
others of great excellence, notably a photo-
graph of Millais as a young man dressed as
a monk, which might well have been repro-
duced here. It would also have added greatly
to the value 01 the book had some of the many
sketches and pictures referred to in the text
but quite unknown to the public been in-
cluded, even if it had involved leaving out some
Of the familiar subjects, such as The Huguenot,
Bubbles, etc.

Somerset House Past and Present. By Raymond
Needham and Alexander Webster. (London :
Fisher Unwin.) 21s. net.—This exhaustive history
of the Duke of Somerset's palace, the illustrations
of which include many reproductions of interesting
portraits and old prints, embodies the results of
much arduous research, in the course of which
many new facts have been discovered. It is in-
deed far more than a mere account of a famous

building, for its authors have made excursions
into archaeological and topographical by-paths, so
that it will appeal to the antiquarian as well as the
student of history.

Ideals in Art. By Walter Crane. (London::
George Bell & Sons.) xos. 6d. net.—The various
lectures of which this useful and copiously illus-
trated volume consists bear well the crucial test of
republication in book form. They tell in a truly
graphic manner the story of the modern reform in
decorative art in which their author had so large a
share, and define in a masterly way the ideals that
should inspire the craftsman and the employer for
whom he works.

Handbook of English Antiquities. By George
Clinch, F.G.S. (London: Upcott Gill; New
York : Charles Scribner's Sons.) 6s. 6d. net.—
Although the author of this brightly written and
well illustrated volume—the title of which, by the
way, should have been British antiquities—explains
that it is primarily intended for collectors who
have not time to consult more ambitious works, it
is practically a complete history of the subject of
which it treats. Mr. Clinch is a thorough expert,
and has all the method characteristic of the true
man of science. He deals with every variety of
Roman, Anglo-Saxon and later archaeological relics
in chronological order, and supplements his able
descriptions with a most carefully compiled
glossary which is really a catalogue raisonne.

Up-along and Down-along. By Eden Phill-
pots. With Illustrations by Claude A. Shepper-
son, R.I. (London : Methuen.) $s. net.—The
author of these charming songs, that have one and
all the true poetic ring and are full of genuine
sentiment, is fortunate in having secured so sympa-
thetic an illustrator as Mr. Shepperson, who has
very happily caught the spirit of the text. The
Devon Courtship, for instance, is a true idyll of
rural courtship ; the A Li'I Suction, a Li'I Sleep, a
poem of maternal love.

Hidden Treasures at the National Gallery.
Studies and Drawings by J. M. Turner. With an
Essay by E. T. Cook. (Pall Mall Press.) 5*.—It
is indeed greatly to be hoped that all who are in-
terested in the preservation of the treasures
bequeathed to the nation by Turner, will read with
attention the eloquent Preface to the interesting
series of reproductions of some of the sketches and
drawings that are generally hidden away in the
basement of the National Gallery. Mr. Cook, who
had every opportunity of examining these priceless
heirlooms when he was engaged in his edition of
Ruskin's works, draws up a very serious indictment