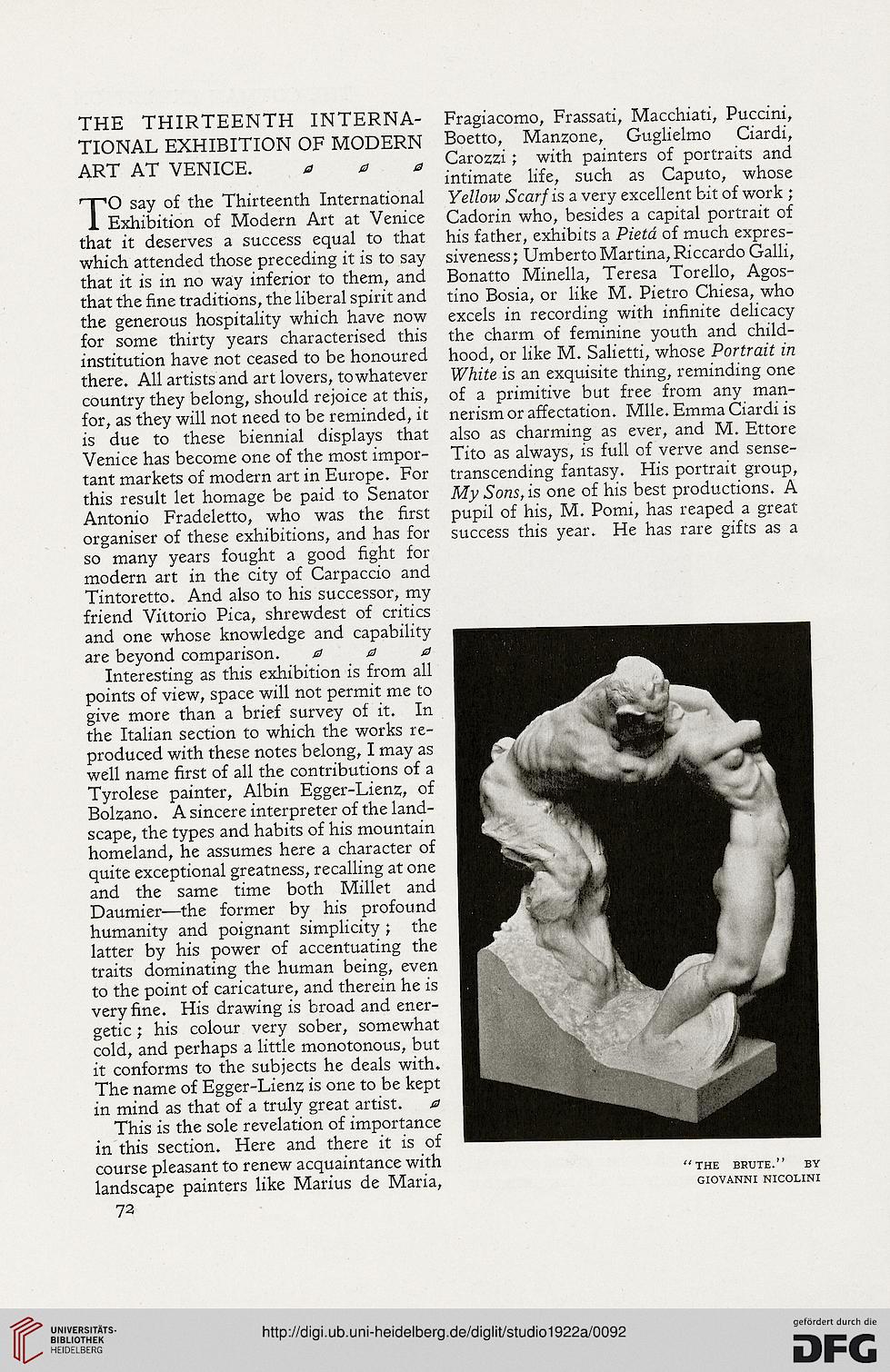 TO say of the Thirteenth International
Exhibition of Modern Art at Venice
that it deserves a success equal to that
which attended those preceding it is to say
that it is in no way inferior to them, and
that the fine traditions, the liberal spirit and
the generous hospitality which have now
for some thirty years characterised this
institution have not ceased to be honoured
there. All artists and art lovers, towhatever
country they belong, should rejoice at this,
for, as they will not need to be reminded, it
is due to these biennial displays that
Venice has become one of the most impor-
tant markets of modern art in Europe. For
this result let homage be paid to Senator
Antonio Fradeletto, who was the first
organiser of these exhibitions, and has for
so many years fought a good fight for
modern art in the city of Carpaccio and
Tintoretto. And also to his successor, my
friend Vittorio Pica, shrewdest of critics
and one whose knowledge and capability
are beyond comparison. 000
Interesting as this exhibition is from all
points of view, space will not permit me to
give more than a brief survey of it. In
the Italian section to which the works re-
produced with these notes belong, I may as
well name first of all the contributions of a
Tyrolese painter, Albin Egger-Lienz, of
Bolzano. A sincere interpreter of the land-
scape, the types and habits of his mountain
homeland, he assumes here a character of
quite exceptional greatness, recalling at one
and the same time both Millet and
Daumier—the former by his profound
humanity and poignant simplicity ; the
latter by his power of accentuating the
traits dominating the human being, even
to the point of caricature, and therein he is
very fine. His drawing is broad and ener-
getic ; his colour very sober, somewhat
cold, and perhaps a little monotonous, but
it conforms to the subjects he deals with.
The name of Egger-Lienz is one to be kept
in mind as that of a truly great artist. 0
This is the sole revelation of importance
in this section. Here and there it is of
course pleasant to renew acquaintance with
landscape painters like Marius de Maria,
72

Fragiacomo, Frassati, Macchiati, Puccini,
Boetto, Manzone, Guglielmo Ciardi,
Carozzi; with painters of portraits and
intimate life, such as Caputo, whose
Yellow Scarf is a very excellent bit of work ;
Cadorin who, besides a capital portrait of
his father, exhibits a Pietd of much expres-
siveness; Umberto Martina, Riccardo Galli,
Bonatto Minella, Teresa Torello, Agos-
tino Bosia, or like M. Pietro Chiesa, who
excels in recording with infinite delicacy
the charm of feminine youth and child-
hood, or like M. Salietti, whose Portrait in
White is an exquisite thing, reminding one
of a primitive but free from any man-
nerism or affectation. Mile. Emma Ciardi is
also as charming as ever, and M. Ettore
Tito as always, is full of verve and sense-
transcending fantasy. His portrait group,
My Sons, is one of his best productions. A
pupil of his, M. Pomi, has reaped a great
success this year. He has rare gifts as a

"THE BRUTE." BY
GIOVANNI NICOLINI