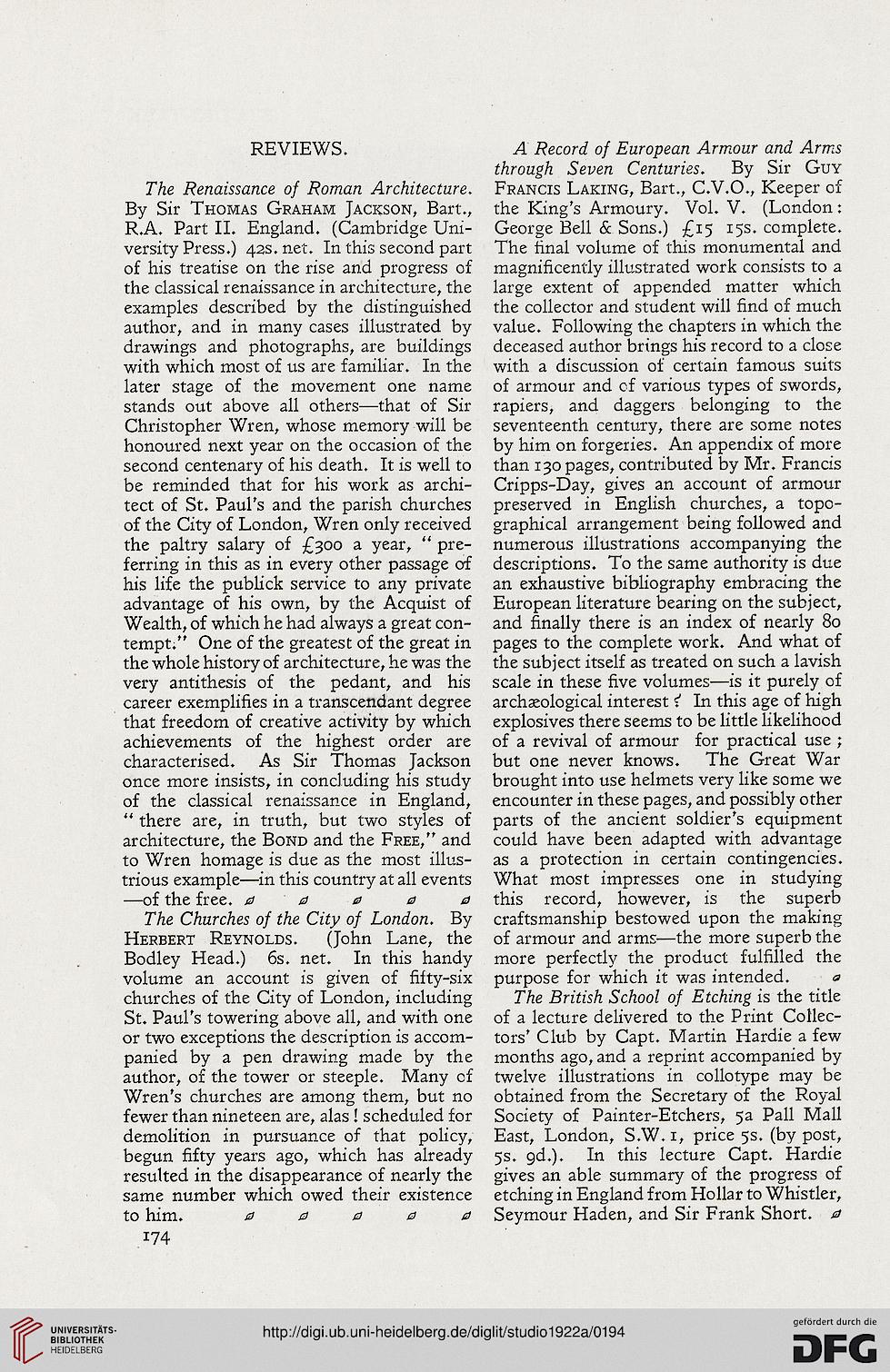 The Renaissance of Roman Architecture.
By Sir Thomas Graham Jackson, Bart.,
R.A. Part II. England. (Cambridge Uni-
versity Press.) 42s.net. In this second part
of his treatise on the rise and progress of
the classical renaissance in architecture, the
examples described by the distinguished
author, and in many cases illustrated by
drawings and photographs, are buildings
with which most of us are familiar. In the
later stage of the movement one name
stands out above all others—that of Sir
Christopher Wren, whose memory will be
honoured next year on the occasion of the
second centenary of his death. It is well to
be reminded that for his work as archi-
tect of St. Paul's and the parish churches
of the City of London, Wren only received
the paltry salary of £300 a year, " pre-
ferring in this as in every other passage of
his life the publick service to any private
advantage of his own, by the Acquist of
Wealth, of which he had always a great con-
tempt." One of the greatest of the great in
the whole history of architecture, he was the
very antithesis of the pedant, and his
career exemplifies in a transcendant degree
that freedom of creative activity by which
achievements of the highest order are
characterised. As Sir Thomas Jackson
once more insists, in concluding his study
of the classical renaissance in England,
" there are, in truth, but two styles of
architecture, the Bond and the Free," and
to Wren homage is due as the most illus-
trious example—in this country at all events
—of the free, 0 0 0 0 0

The Churches of the City of London. By
Herbert Reynolds. (John Lane, the
Bodley Head.) 6s. net. In this handy
volume an account is given of fifty-six
churches of the City of London, including
St. Paul's towering above all, and with one
or two exceptions the description is accom-
panied by a pen drawing made by the
author, of the tower or steeple. Many cf
Wren's churches are among them, but no
fewer than nineteen are, alas! scheduled for
demolition in pursuance of that policy,
begun fifty years ago, which has already
resulted in the disappearance of nearly the
same number which owed their existence
to him. a a a 0 a

A Record of European Armour and Arms
through Seven Centuries. By Sir Guy
Francis Laking, Bart., C.V.O., Keeper of
the King's Armoury. Vol. V. (London:
George Bell & Sons.) £15 15s. complete.
The final volume of this monumental and
magnificently illustrated work consists to a
large extent of appended matter which
the collector and student will find of much
value. Following the chapters in which the
deceased author brings his record to a close
with a discussion of certain famous suits
of armour and cf various types of swords,
rapiers, and daggers belonging to the
seventeenth century, there are some notes
by him on forgeries. An appendix of more
than 130 pages, contributed by Mr. Francis
Cripps-Day, gives an account of armour
preserved in English churches, a topo-
graphical arrangement being followed and
numerous illustrations accompanying the
descriptions. To the same authority is due
an exhaustive bibliography embracing the
European literature bearing on the subject,
and finally there is an index of nearly 80
pages to the complete work. And what of
the subject itself as treated on such a lavish
scale in these five volumes—is it purely of
archaeological interest • In this age of high
explosives there seems to be little likelihood
of a revival of armour for practical use ;
but one never knows. The Great War
brought into use helmets very like some we
encounter in these pages, and possibly other
parts of the ancient soldier's equipment
could have been adapted with advantage
as a protection in certain contingencies.
What most impresses one in studying
this record, however, is the superb
craftsmanship bestowed upon the making
of armour and arms—the more superb the
more perfectly the product fulfilled the
purpose for which it was intended. a

The British School of Etching is the title
of a lecture delivered to the Print Collec-
tors' Club by Capt. Martin Hardie a few
months ago, and a reprint accompanied by
twelve illustrations in collotype may be
obtained from the Secretary of the Royal
Society of Painter-Etchers, 5a Pall Mall
East, London, S.W. 1, price 5s. (by post,
5s. gd.). In this lecture Capt. Hardie
gives an able summary of the progress of
etching in England from Hollar to Whistler,
Seymour Haden, and Sir Frank Short. 0