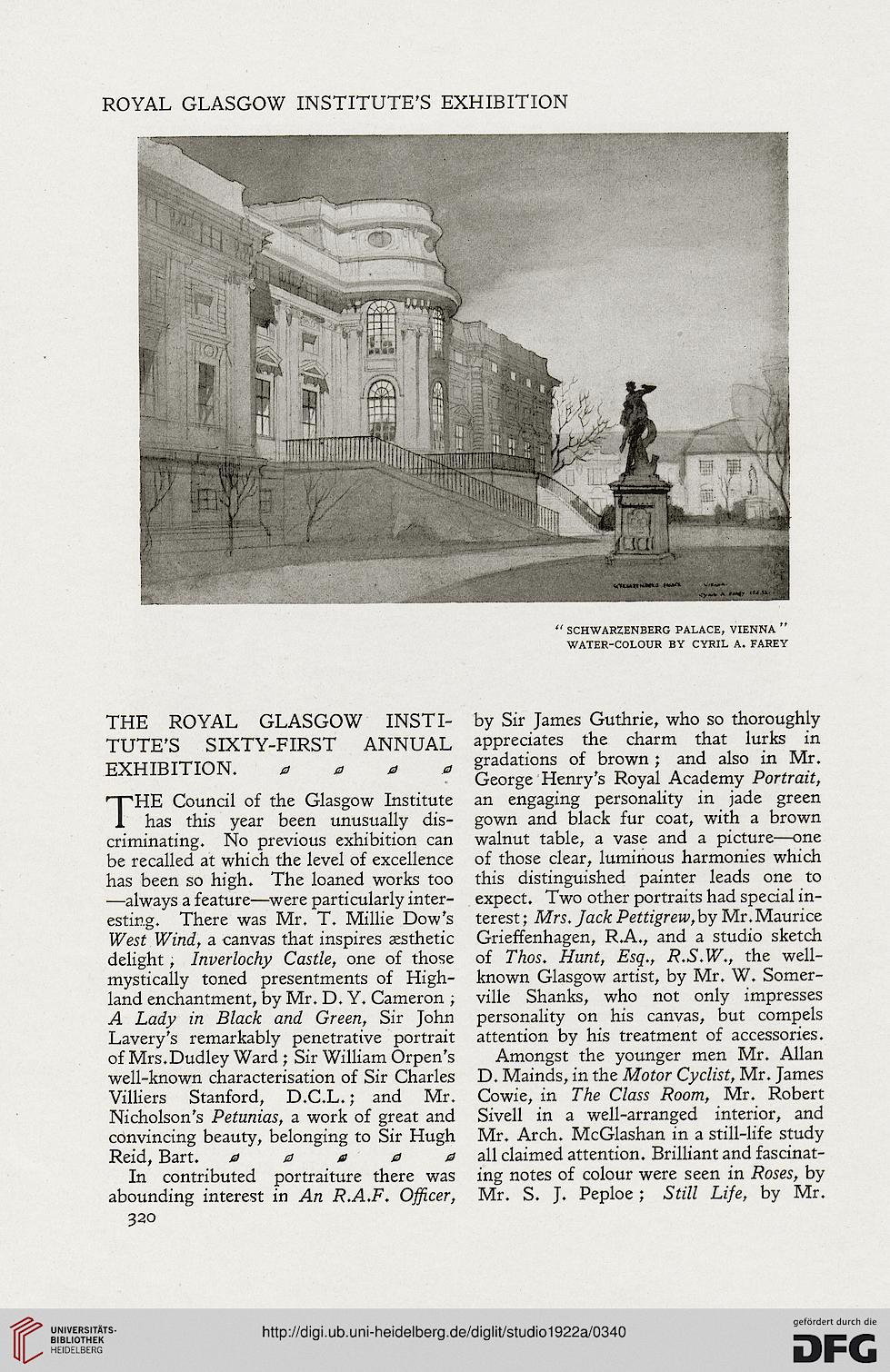 THE Council of the Glasgow Institute
has this year been unusually dis-
criminating. No previous exhibition can
be recalled at which the level of excellence
has been so high. The loaned works too
—always a feature—were particularly inter-
esting. There was Mr. T. Millie Dow's
West Wind, a canvas that inspires aesthetic
delight, Inverlochy Castle, one of those
mystically toned presentments of High-
land enchantment, by Mr. D. Y. Cameron ;
A Lady in Black and Green, Sir John
Lavery's remarkably penetrative portrait
of Mrs.Dudley Ward ; Sir William Orpen's
well-known characterisation of Sir Charles
Villiers Stanford, D.C.L.; and Mr.
Nicholson's Petunias, a work of great and
convincing beauty, belonging to Sir Hugh
Reid, Bart. 00000
In contributed portraiture there was
abounding interest in An R.A.F. Officer,
320

by Sir James Guthrie, who so thoroughly
appreciates the charm that lurks in
gradations of brown ; and also in Mr.
George Henry's Royal Academy Portrait,
an engaging personality in jade green
gown and black fur coat, with a brown
walnut table, a vase and a picture—one
of those clear, luminous harmonies which
this distinguished painter leads one to
expect. Two other portraits had special in-
terest ; Mrs. Jack Pettigrew, by Mr. Maurice
Grieffenhagen, R.A., and a studio sketch
of Thos. Hunt, Esq., R.S.W., the well-
known Glasgow artist, by Mr. W. Somer-
ville Shanks, who not only impresses
personality on his canvas, but compels
attention by his treatment of accessories.

Amongst the younger men Mr. Allan
D. Mainds, in the Motor Cyclist, Mr. James
Cowie, in The Class Room, Mr. Robert
Sivell in a well-arranged interior, and
Mr. Arch. McGlashan in a still-life study
all claimed attention. Brilliant and fascinat-
ing notes of colour were seen in Roses, by
Mr. S. J. Peploe; Still Life, by Mr.