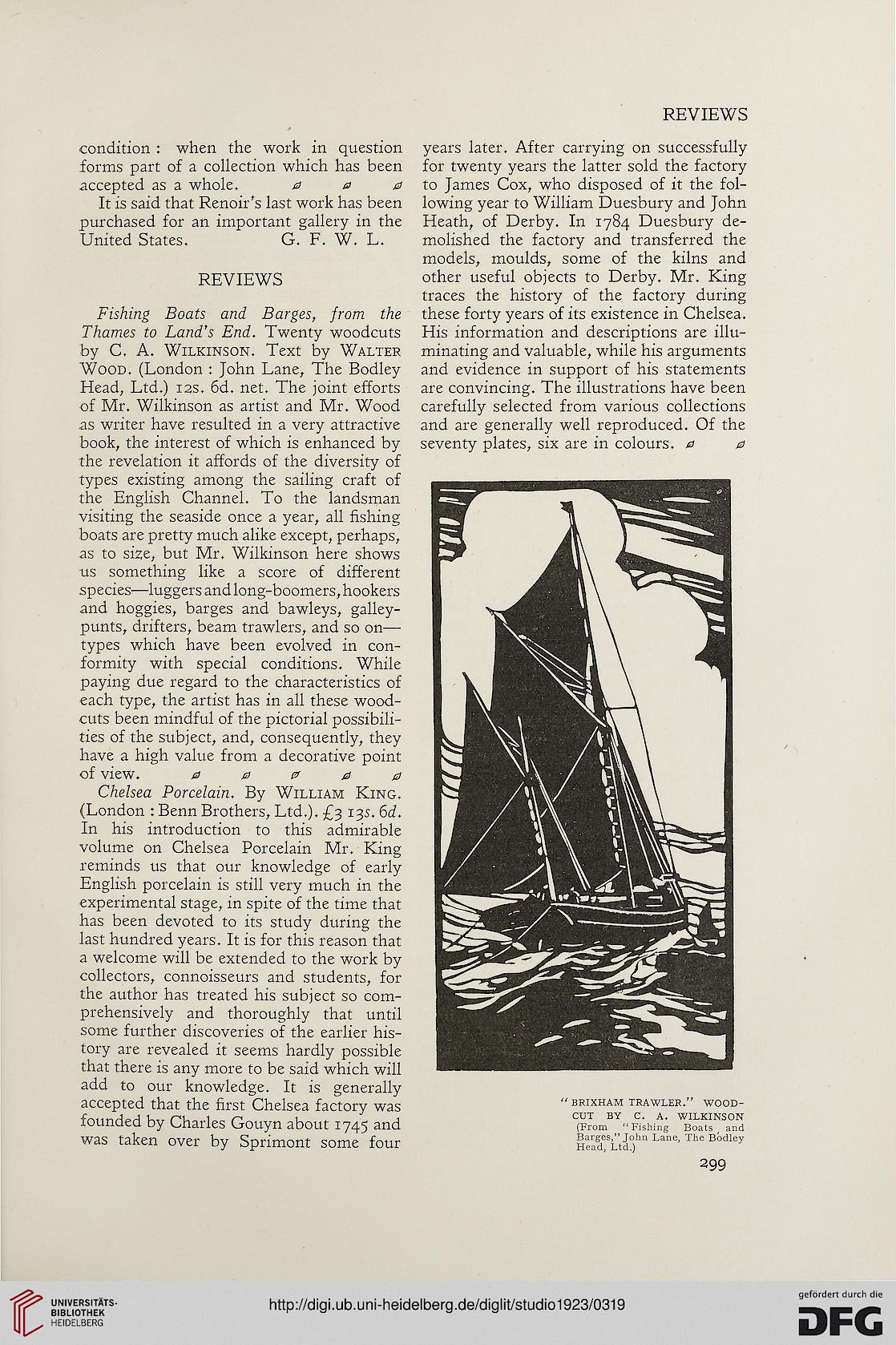 condition : when the work in question
forms part of a collection which has been
accepted as a whole. 000

It is said that Renoir's last work has been
purchased for an important gallery in the
United States. G. F. W. L.

Fishing Boats and Barges, from the
Thames to Land's End. Twenty woodcuts
by C. A. Wilkinson, Text by Walter
Wood. (London : John Lane, The Bodley
Head, Ltd.) 12s. 6d. net. The joint efforts
of Mr. Wilkinson as artist and Mr. Wood
as writer have resulted in a very attractive
book, the interest of which is enhanced by
the revelation it affords of the diversity of
types existing among the sailing craft of
the English Channel. To the landsman
visiting the seaside once a year, all fishing
boats are pretty much alike except, perhaps,
as to size, but Mr, Wilkinson here shows
us something like a score of different
species—luggers and long-boomers, hookers
and hoggies, barges and bawleys, galley-
punts, drifters, beam trawlers, and so on—
types which have been evolved in con-
formity with special conditions. While
paying due regard to the characteristics of
each type, the artist has in all these wood-
cuts been mindful of the pictorial possibili-
ties of the subject, and, consequently, they
have a high value from a decorative point
of view. 0 0 0 0 0

Chelsea Porcelain. By William King.
(London : Benn Brothers, Ltd,). £3 135.6d.
In his introduction to this admirable
volume on Chelsea Porcelain Mr. King
reminds us that our knowledge of early
English porcelain is still very much in the
experimental stage, in spite of the time that
has been devoted to its study during the
last hundred years. It is for this reason that
a welcome will be extended to the work by
collectors, connoisseurs and students, for
the author has treated his subject so com-
prehensively and thoroughly that until
some further discoveries of the earlier his-
tory are revealed it seems hardly possible
that there is any more to be said which will
add to our knowledge. It is generally
accepted that the first Chelsea factory was
founded by Charles Gouyn about 1745 and
was taken over by Sprimont some four

years later. After carrying on successfully
for twenty years the latter sold the factory
to James Cox, who disposed of it the fol-
lowing year to William Duesbury and John
Heath, of Derby. In 1784 Duesbury de-
molished the factory and transferred the
models, moulds, some of the kilns and
other useful objects to Derby. Mr. King
traces the history of the factory during
these forty years of its existence in Chelsea.
His information and descriptions are illu-
minating and valuable, while his arguments
and evidence in support of his statements
are convincing. The illustrations have been
carefully selected from various collections
and are generally well reproduced. Of the
seventy plates, six are in colours. 0 0