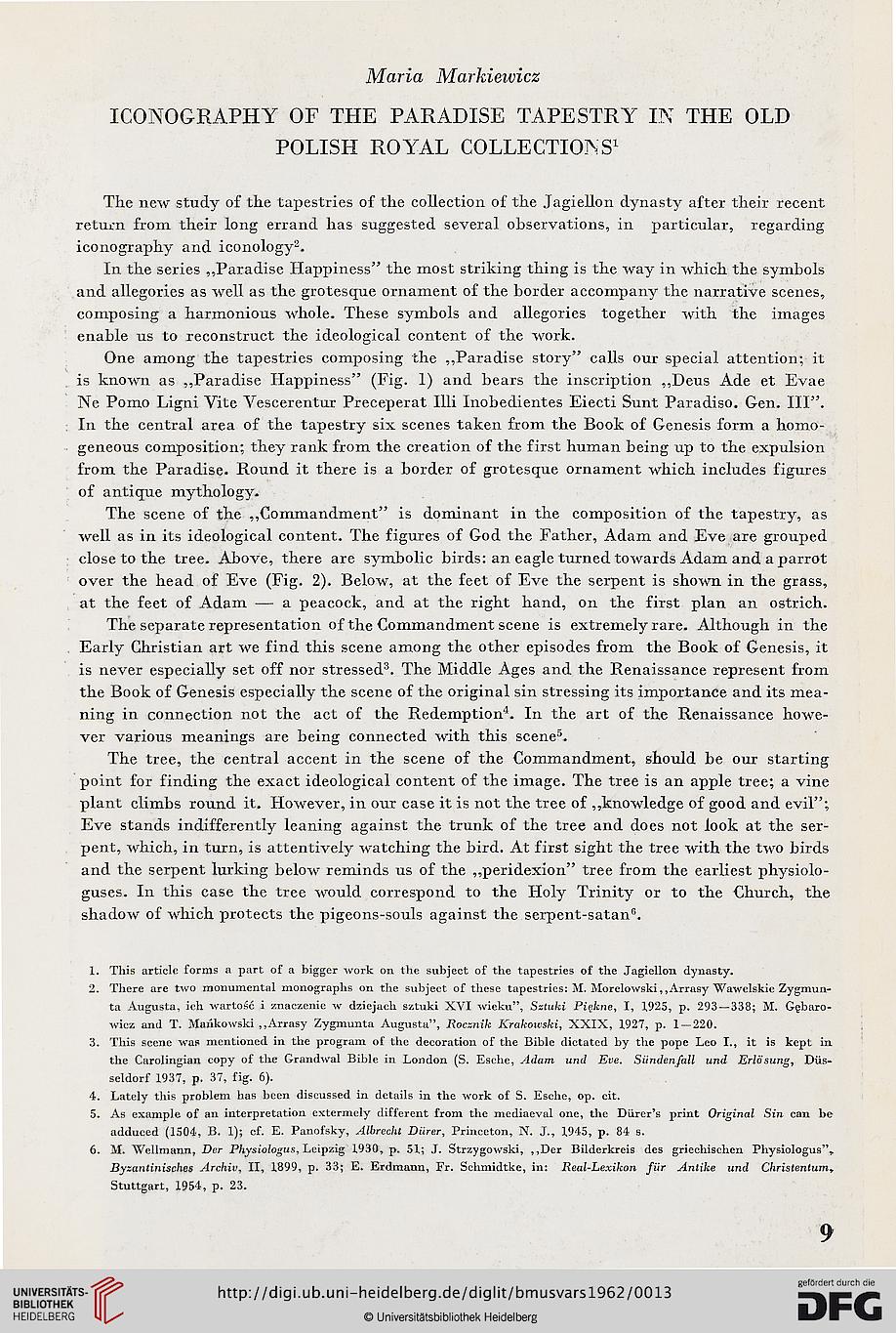 ICONOGRAPHY OF THE PARADISE TAPESTRY IN THE OLD
POLISH ROYAL COLLECTIOINS1

The new study of the tapestries of the collection of thc Jagiellon dynasty after their recent
return from their long errand has suggested several observations, in particular, regarding
iconography and iconology2.

In the series „Paradise Happiness" the most striking thing is the "way in which the symbols
and allegories as well as the grotesque ornament of the border accompany the narrative scenes,
composing a harmonious whole. These symbols and allegories together with the images
enable us to reconstruct the ideological content of the worlc.

The scenę of the „Commandment" is dominant in the composition of the tapestry, as
well as in its ideological content. The figures of God the Father, Adam and Eve are grouped
close to the tree. Above, there are symbolic birds: an eagle turned towards Adam and a parrot
over the head of Eve (Fig. 2). Below, at the feet of Eve the serpent is shown in the grass,
at the feet of Adam — a peacock, and at the right hand, on the first plan an ostrich.

The separate representation of the Commandment scenę is extremely rare. Although in the
Early Christian art we find this scenę among the other episodes from the Book of Genesis, it
is never especially set off nor stressed3. The Middle Ages and the Renaissance represent from
the Book of Genesis especially the scenę of the original sin stressing its importance and its mea-
ning in connection not the act of the Redemption4. In the art of the Renaissance howe-
ver various meanings are being connected with this scenę5.

The tree, the central accent in the scenę of the Commandment, should be our starting
point for finding the exact ideological content of the image. The tree is an apple tree; a vine
plant climbs round it. However, in our case it is not the tree of „knowledge of good and evil";
Eve stands indifferently leaning against the trunk of the tree and does not look at the ser-
pent, which, in turn, is attentiveiy watching the bird. At first sight the tree with the two birds
and the serpent lurking below reminds us of the ,,peridexion" tree from the earliest physiolo-
guses. In this case the tree would correspond to the Holy Trinity or to the Church, the
shadow of which protects the pigeons-souls against the serpent-satan6.

1. This article forms a part of a bigger work on the subject of the tapestries of the Jagiellon dynasty.

3. This scenę was mentioned in the program of the decoration of the Bibie dictated by the pope Leo I., it is kept in
the Carolingian copy of the Grandwal Bibie in London (S. Esche, Adam und Eve. Siinden/all und Erlosung, Dus-
seldorf 1937, p. 37, fig. 6).

4. Lately this problem has been discussed in details in tbe work of S. Esche, op. cit.