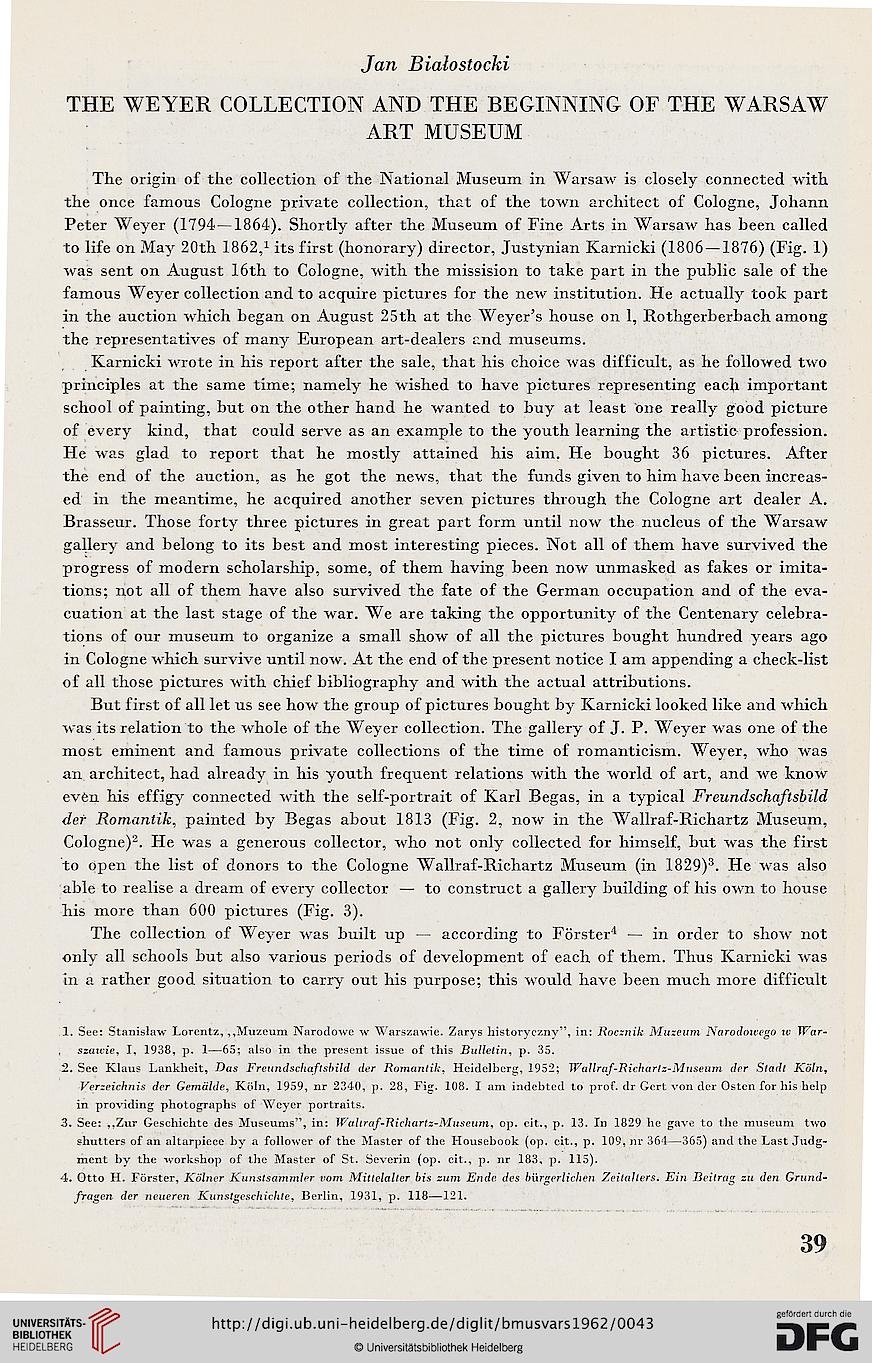 THE WEYER COLLECTION AND THE BEGINNING OF THE WARSAW

The origin of tlie collection of the National Museum in Warsaw is closely connected with
the once famous Cologne private collection, that of the town architect of Cologne, Johann
Peter Weyer (1794 — 1864). Shortly after the Museum of Fine Arts in Warsaw has been called
to life on May 20th 1862,1 its first (honorary) director, Justynian Karnicki (1806 — 1876) (Fig. 1)
was sent on August 16th to Cologne, with the missision to take part in the public sale of the
famous Weyer collection and to acquire pictures for the new institution. He actually took part
in the auction which began on August 25th at the Weyer's house on 1, Rothgerberbach among
the representatives of many European art-dealers and museums.

Karnicki wrote in his report after the sale, that his choice was difficult, as he followed two
principles at the same time; namely he wished to have pictures representing each important
school of painting, but on the other hand he wanted to buy at least one really good picture
of every kind, that could serve as an example to the youth learning the artistic profession.
He was glad to report that he mostly attained his aim. He bought 36 pictures. After
the end of the auction, as he got the news, that the funds given to him have been increas-
ed in the meantime, he acąuired another seven pictures through the Cologne art dealer A.
Brasseur. Those forty three pictures in great part form until now the nucleus of the Warsaw
gallery and belong to its best and most interesting pieces. Not all of them have survived the
progress of modern scholarship, some, of them having been now unmasked as fakes or imita-
tions; not all of them have also survived the fate of the German occupation and of the eva-
cuation at the last stage of the war. We are taking the opportunity of the Centenary celebra-
tions of our museum to organize a smali show of all the pictures bought hundred years ago
in Cologne which survive until now. At the end of the present notice I am appending a check-list
of all those pictures with chief bibliography and with the actual attributions.

But first of all let us see how the group of pictures bought by Karnicki looked like and which
was its relation to the whole of the Weyer collection. The gallery of J. P. Weyer was one of the
most eminent and famous private collections of the time of romanticism. Weyer, who was
an architect, had already in his youth frequent relations with the world of art, and we know
evćn his effigy connected with the self-portrait of Karl Begas, in a typical Freundschaftsbild
der Romantik, painted by Begas about 1813 (Fig. 2, now in the Wallraf-Richartz Museum,
Cologne)2. He was a generous collector, who not only collected for himself, but was the first
to open the list of donors to the Cologne Wallraf-Richartz Museum (in 1829)3. He was also
able to realise a dream of every collector — to construct a gallery building of his own to house
his more than 600 pictures (Fig. 3).

The collection of Weyer was built up — according to Forster4 — in order to show not
only all schools but also various periods of development of each of them. Thus Karnicki was
in a rather good situation to carry out his purpose; this would have been much more difficult

in providing photographs of Weyer portraits.