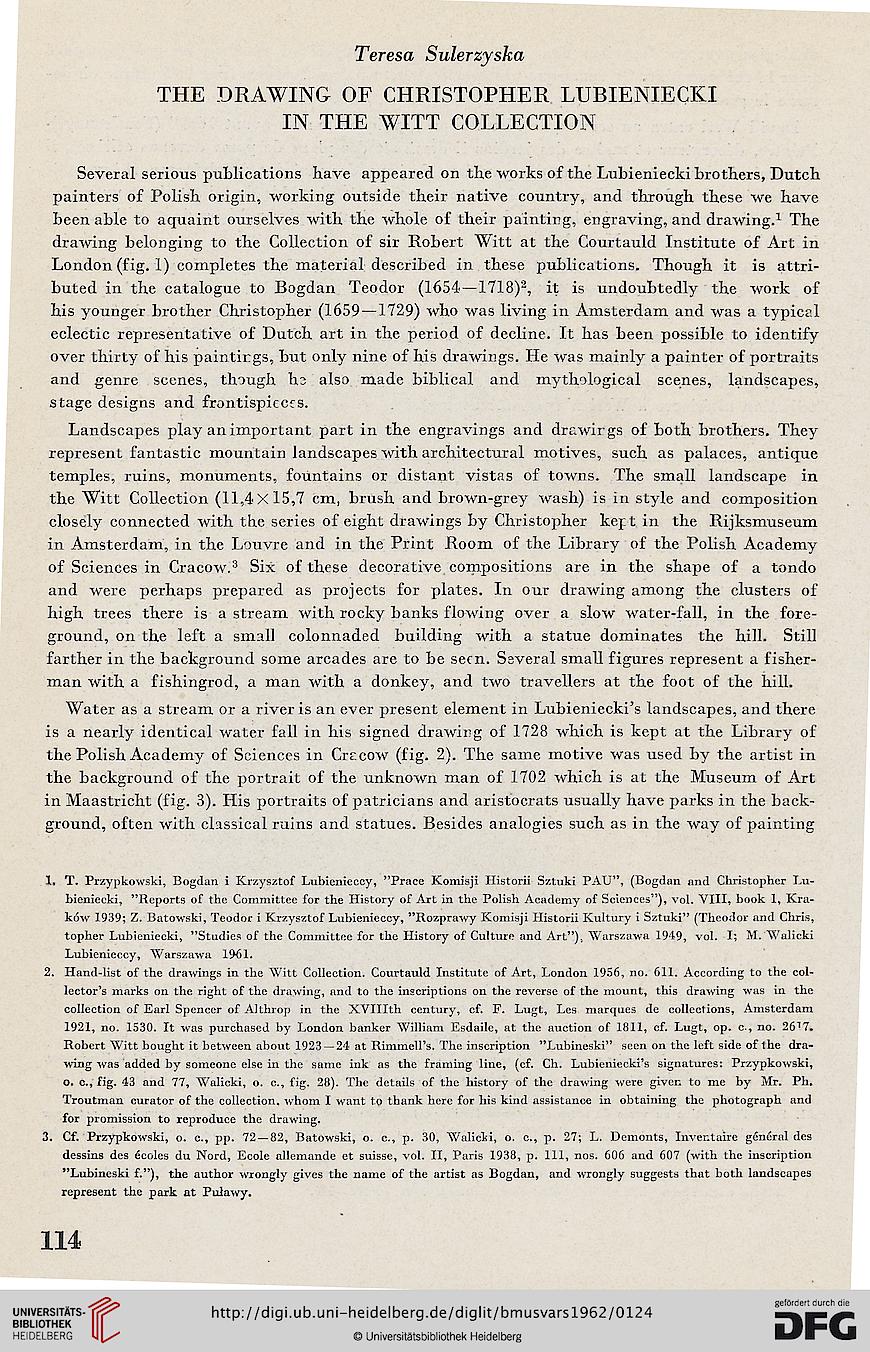 THE DRAWING OF CHRISTOPHER LUBIENIECKI
IN THE WITT COLLECTION

Several serious putlications have appeared on the works of the Lubieniecki brothers, Dutch
painters of Polish origin, working outside their native country, and through these we have
been able to aąuaint ourselves with the whole of their paintirg, engraving, and drawing.1 The
drawing belonging to the Collection of sir Robert Witt at the Courtauld Institute of Art in
London (fig. 1) completes the materiał described in these publications. Though it is attri-
buted in the catalogue to Bogdan Teodor (1654 —1718)2, it is undouhtedly the work of
his younger brother Christopher (1659 —1729) who was living in Amsterdam and was a typical
eclectic representative of Dutch art in the period of declinc. It has been possible to identify
over thirty of his pair.tirgs, but only nine of his drawings. He was mainly a painter of portraits
and genre sccnes, though b.3 also made biblical and mythological scenes, landscapes,
stage designs and frontispkccs.

Landscapes play an important part in the engravings and drcwirgs of both brothers. They
represent fantastic mountain landscapes with architectural motives, such as palaces, antitjue
temples, ruins, monuments, fountains or distant vistas of towns. The smali landscape in
the Witt Collection (11,4X15,7 cm, brush and brown-grey wash) is in style and composition
closely connected with the series of eight drawings by Christopher kept in the Rijksmuseum
in Amsterdam, in the Louvre and in the Print Room of the Library of the Polish Academy
of Sciences in Cracow.3 Six of these decorative compositions are in the shape of a tondo
and were perhaps prepared as projects for plates. In our drawing among the clusters of
high trees there is a stream with rocky banks flowing over a slow water-fall, in the fore-
ground, on the left a smali colonnaded building with a statuę dominates the hill. Still
farther in the background some arcades are to be secn. Ssveral smali figures represent a fisher-
man with a fishingrod, a man with a donkey, and two travellers at the foot of the hill.

Water as a stream or a riveris an ever present element in Lubieniecki's landscapes, and there
is a nearly identical water fali in his signed drawing of 1728 which is kept at the Library of
the Polish Academy of Sciences in Crf.cow (fig. 2). The same motive was used by the artist in
the background of the portrait of the unknown man of 1702 which is at the Museum of Art
in Maastricht (fig. 3). His portraits of patricians and arisfocrats usually have parks in the back-
ground, often with classical ruins and statues. Besides analogies such as in the way of painting

2. Hand-list of the drawings in the W itt Collection. Courtauld Institute of Art, London 1956, no. 611. According to the col-
lector's marks on the right of the drawing, and to the inscriptions on the reversc of the mount, this drawing was in the
collection of Earl Spencer of Althrop in the XVIIIth century, cf. F. Lugt, Lcs marques de collections, Amsterdam
1921, no. 1530. It was purchased by London banker William Esdaile, at the auction of 1811, cf. Lugt, op. c, no. 2677.
Robert Witt bought it between about 1923 — 24 at RimmcH's. The inscription "Lubineski" scen on the left sidc of the dra-
wing was added by someone else in the same ink as the framing line, (cf. Ch. Lubicniccki's signatures: Przypkowski,
o. c, fig. 43 and 77, Walicki, o. c., fig. 28). The details of the history of the drawing were given to me by Mr. Ph.
Troutman curator of the collection. whom I want to tbank here for his kind assistance in obtaining the photograph and
for promission to reproduce the drawing.