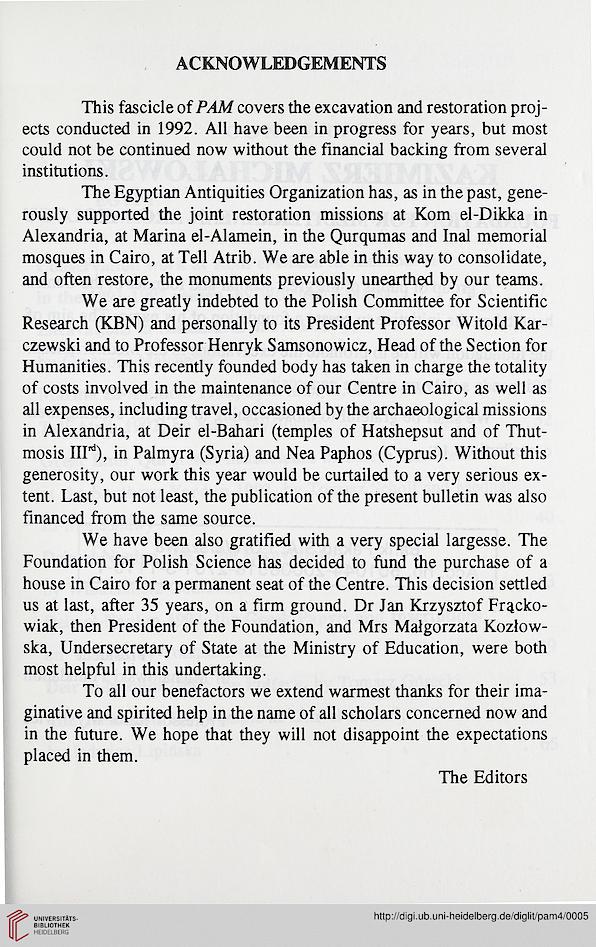 This fascicle of PAM covers the excavation and restoration proj-
ects conducted in 1992. All have been in progress for years, but most
could not be continued now without the financial backing from several
institutions.
The Egyptian Antiquities Organization has, as in the past, gene-
rously supported the joint restoration missions at Kom el-Dikka in
Alexandria, at Marina el-Alamein, in the Qurqumas and Inal memorial
mosques in Cairo, at Tell Atrib. We are able in this way to consolidate,
and often restore, the monuments previously unearthed by our teams.
We are greatly indebted to the Polish Committee for Scientific
Research (KBN) and personally to its President Professor Witold Kar-
czewski and to Professor Henryk Samsonowicz, Head of the Section for
Humanities. This recently founded body has taken in charge the totality
of costs involved in the maintenance of our Centre in Cairo, as well as
all expenses, including travel, occasioned by the archaeological missions
in Alexandria, at Deir el-Bahari (temples of Hatshepsut and of Thut-
mosis III"*), in Palmyra (Syria) and Nea Paphos (Cyprus). Without this
generosity, our work this year would be curtailed to a very serious ex-
tent. Last, but not least, the publication of the present bulletin was also
financed from the same source.
We have been also gratified with a very special largesse. The
Foundation for Polish Science has decided to fund the purchase of a
house in Cairo for a permanent seat of the Centre. This decision settled
us at last, after 35 years, on a firm ground. Dr Jan Krzysztof Fracko-
wiak, then President of the Foundation, and Mrs Malgorzata Kozlow-
ska, Undersecretary of State at the Ministry of Education, were both
most helpful in this undertaking.
To all our benefactors we extend warmest thanks for their ima-
ginative and spirited help in the name of all scholars concerned now and
in the future. We hope that they will not disappoint the expectations
placed in them.