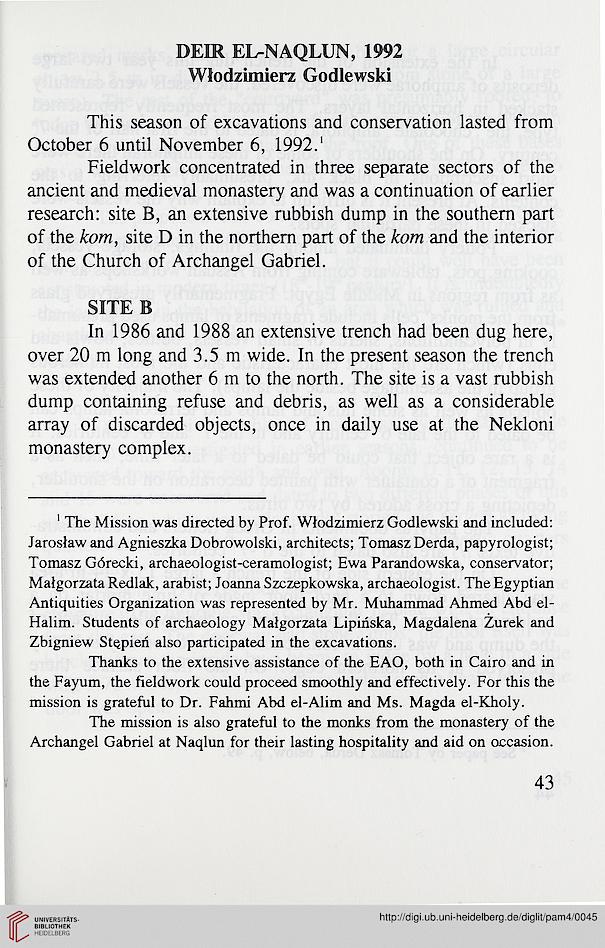 This season of excavations and conservation lasted from
October 6 until November 6, 1992.'
Fieldwork concentrated in three separate sectors of the
ancient and medieval monastery and was a continuation of earlier
research: site B, an extensive rubbish dump in the southern part
of the site D in the northern part of the /row and the interior
of the Church of Archangel Gabriel.
SITEB
In 1986 and 1988 an extensive trench had been dug here,
over 20 m long and 3.5 m wide. In the present season the trench
was extended another 6 m to the north. The site is a vast rubbish
dump containing refuse and debris, as well as a considerable
array of discarded objects, once in daily use at the Nekloni
monastery complex.

' The Mission was directed by Prof. Wlodzimierz Godlewski and included:
Jaroslawand Agnieszka Dobrowolski, architects; TomaszDerda, papyrologist;
Tomasz Gdrecki, archaeologist-ceramologist; Ewa Parandowska, conservator;
MalgorzataRedlak, arabist; Joanna Szczepkowska, archaeologist. The Egyptian
Antiquities Organization was represented by Mr. Muhammad Ahmed Abd el-
Halim. Students of archaeology Malgorzata Lipinska, Magdalena Zurek and
Zbigniew Stepien also participated in the excavations.
Thanks to the extensive assistance of the EAO, both in Cairo and in
the Fayum, the fieldwork could proceed smoothly and effectively. For this the
mission is grateful to Dr. Fahmi Abd el-Alim and Ms. Magda el-Kholy.
The mission is also grateful to the monks from the monastery of the
Archangel Gabriel at Naqlun for their lasting hospitality and aid on occasion.