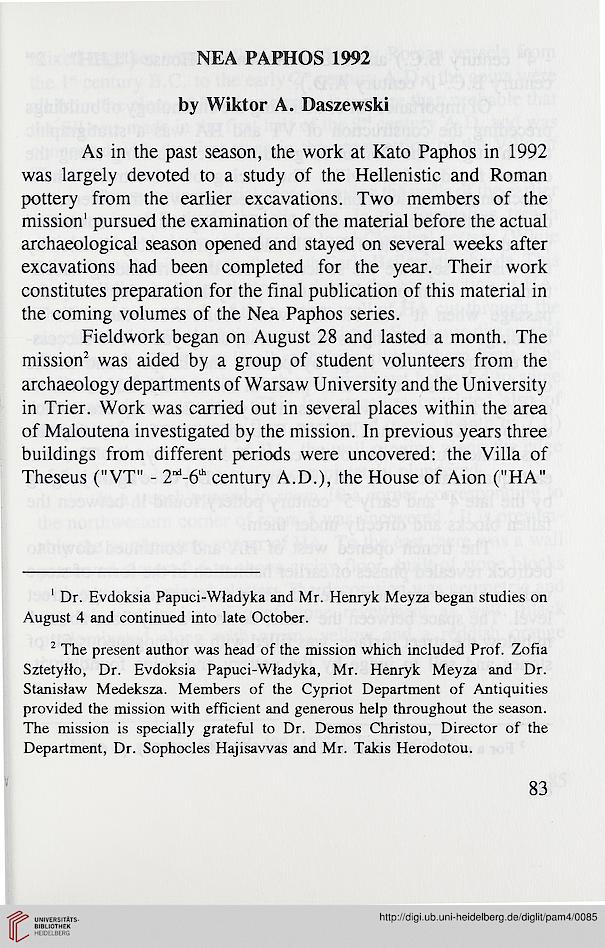 by Wiktor A. Daszewski
As in the past season, the work at Kato Paphos in 1992
was largely devoted to a study of the Hellenistic and Roman
pottery from the earlier excavations. Two members of the
mission' pursued the examination of the material before the actual
archaeological season opened and stayed on several weeks after
excavations had been completed for the year. Their work
constitutes preparation for the final publication of this material in
the coming volumes of the Nea Paphos series.
Fieldwork began on August 28 and lasted a month. The
mission^ was aided by a group of student volunteers from the
archaeology departments of Warsaw University and the University
in Trier. Work was carried out in several places within the area
of Maloutena investigated by the mission. In previous years three
buildings from different periods were uncovered: the Villa of
Theseus ("VT" - 2°^-6^ century A.D.), the House of Aion ("HA"

' Dr. Evdoksia Papuci-Wladyka and Mr. Henryk Meyza began studies on
August 4 and continued into iate October.
^ The present author was head of the mission which included Prof. Zofia
SztetyMo, Dr. Evdoksia Papuci-Wladyka, Mr. Henryk Meyza and Dr.
Stanislaw Medeksza. Members of the Cypriot Department of Antiquities
provided the mission with efficient and generous help throughout the season.
The mission is specially grateful to Dr. Demos Christou, Director of the
Department, Dr. Sophocles Hajisawas and Mr. Takis Herodotou.