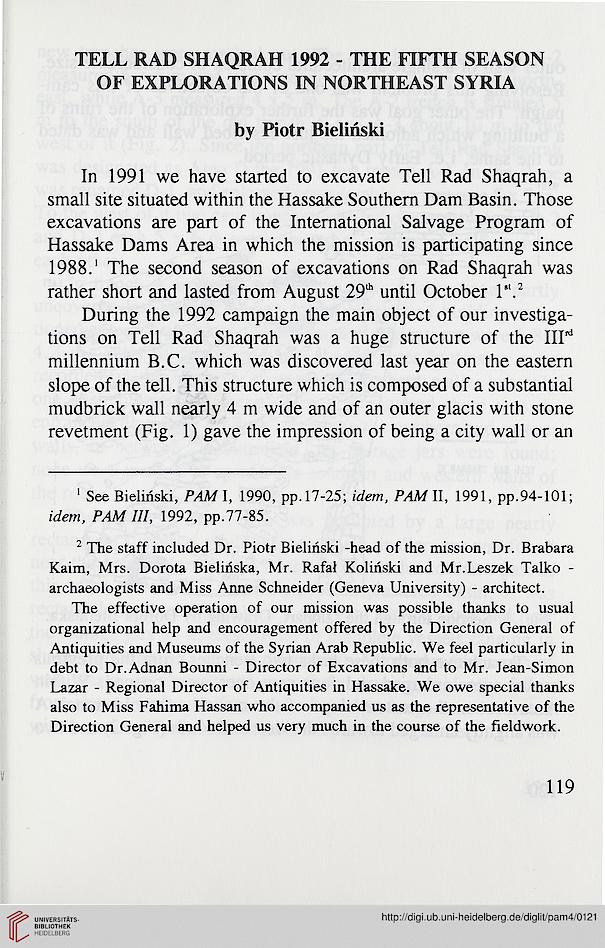 by Piotr BieMbski
In 1991 we have started to excavate Tell Rad Shaqrah, a
small site situated within the Hassake Southern Dam Basin. Those
excavations are part of the International Salvage Program of
Hassake Dams Area in which the mission is participating since
1988.' The second season of excavations on Rad Shaqrah was
rather short and lasted from August 29^ until October 1"/
During the 1992 campaign the main object of our investiga-
tions on Tell Rad Shaqrah was a huge structure of the III"'
millennium B.C. which was discovered last year on the eastern
slope of the tell. This structure which is composed of a substantial
mudbrick wall nearly 4 m wide and of an outer glacis with stone
revetment (Fig. 1) gave the impression of being a city wall or an

' SeeBielinski, PAM I, 1990, pp. 17-25; PAM II, 1991, pp.94-101;
/Jem, PAM 777, 1992, pp.77-85.
^ The staff included Dr. Piotr Bielihski -head of the mission, Dr. Brabara
Kaim, Mrs. Dorota Bielihska, Mr. Rafal Kolinski and Mr.Leszek Talko -
archaeologists and Miss Anne Schneider (Geneva University) - architect.
The effective operation of our mission was possible thanks to usual
organizational help and encouragement offered by the Direction General of
Antiquities and Museums of the Syrian Arab Republic. We feel particularly in
debt to Dr.Adnan Bounni - Director of Excavations and to Mr. Jean-Simon
Lazar - Regional Director of Antiquities in Hassake. We owe special thanks
also to Miss Fahima Hassan who accompanied us as the representative of the
Direction General and helped us very much in the course of the fieldwork.