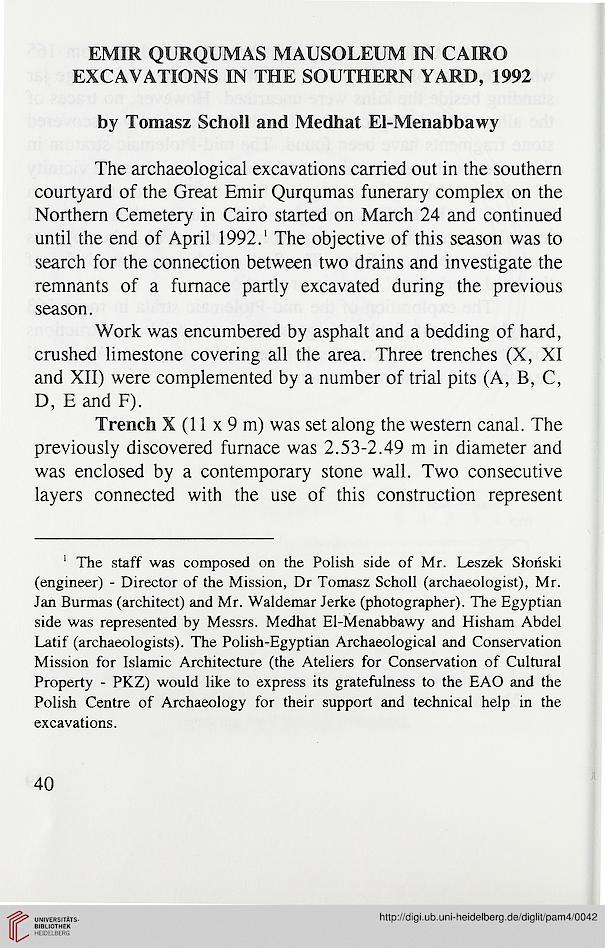 Information about OCR text
EMIR QURQUMAS MAUSOLEUM IN CAIRO
EXCAVATIONS IN THE SOUTHERN YARD, 1992
by Tomasz SchoM and Medhat El-Menabbawy
The archaeological excavations carried out in the southern
courtyard of the Great Emir Qurqumas funerary complex on the
Northern Cemetery in Cairo started on March 24 and continued
until the end of April 1992.' The objective of this season was to
search for the connection between two drains and investigate the
remnants of a furnace partly excavated during the previous
season.
Work was encumbered by asphalt and a bedding of hard,
crushed limestone covering all the area. Three trenches (X, XI
and XII) were complemented by a number of trial pits (A, B, C,
D, E and F).
Trench X (11 x 9 m) was set along the western canal. The
previously discovered furnace was 2.53-2.49 m in diameter and
was enclosed by a contemporary stone wall. Two consecutive
layers connected with the use of this construction represent

' The staff was composed on the Polish side of Mr. Leszek Slonski
(engineer) - Director of the Mission, Dr Tomasz Scholl (archaeologist), Mr.
Jan Burmas (architect) and Mr. Waldemar Jerke (photographer). The Egyptian
side was represented by Messrs. Medhat El-Menabbawy and Hisham Abdel
Latif (archaeologists). The Polish-Egyptian Archaeological and Conservation
Mission for Islamic Architecture (the Ateliers for Conservation of Cultural
Property - PKZ) would like to express its gratefulness to the EAO and the
Polish Centre of Archaeology for their support and technical help in the
excavations.