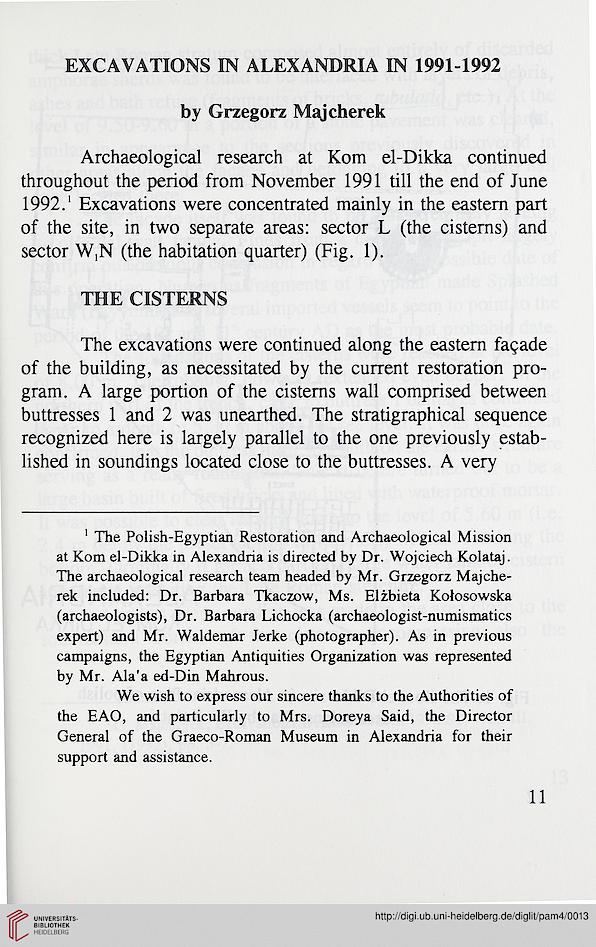 Information about OCR text
EXCAVATIONS IN ALEXANDRIA IN 1991-1992

by Grzegorz Majcherek
Archaeological research at Kom el-Dikka continued
throughout the period from November 1991 till the end of June
1992/ Excavations were concentrated mainly in the eastern part
of the site, in two separate areas: sector L (the cisterns) and
sector W,N (the habitation quarter) (Fig. 1).
THE CISTERNS
The excavations were continued along the eastern facade
of the building, as necessitated by the current restoration pro-
gram. A large portion of the cisterns wall comprised between
buttresses 1 and 2 was unearthed. The stratigraphical sequence
recognized here is largely parallel to the one previously estab-
lished in soundings located close to the buttresses. A very

' The Polish-Egyptian Restoration and Archaeological Mission
at Kom el-Dikka in Alexandria is directed by Dr. Wcjciech Kolataj.
The archaeological research team headed by Mr. Grzegorz Majche-
rek included: Dr. Barbara Tkaczow, Ms. Elzbieta Kolosowska
(archaeologists), Dr. Barbara Lichocka (archaeologist-numismatics
expert) and Mr. Waldemar Jerke (photographer). As in previous
campaigns, the Egyptian Antiquities Organization was represented
by Mr. Ala'a ed-Din Mahrous.
We wish to express our sincere thanks to the Authorities of
the EAO, and particularly to Mrs. Doreya Said, the Director
General of the Graeco-Roman Museum in Alexandria for their
support and assistance.