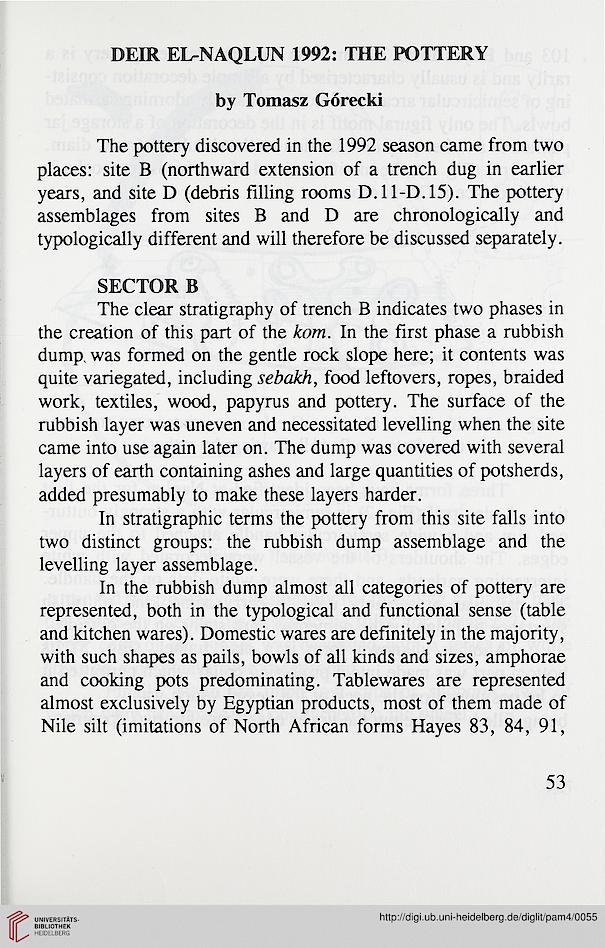 by Tomasz Gorecki
The pottery discovered in the 1992 season came from two
places: site B (northward extension of a trench dug in earlier
years, and site D (debris filling rooms D.11-D.15). The pottery
assemblages from sites B and D are chronologically and
typologically different and will therefore be discussed separately.
SECTOR B
The clear stratigraphy of trench B indicates two phases in
the creation of this part of the Awn. In the first phase a rubbish
dump, was formed on the gentle rock slope here; it contents was
quite variegated, including food leftovers, ropes, braided
work, textiles, wood, papyrus and pottery. The surface of the
rubbish layer was uneven and necessitated levelling when the site
came into use again later on. The dump was covered with several
layers of earth containing ashes and large quantities of potsherds,
added presumably to make these layers harder.
In stratigraphic terms the pottery from this site falls into
two distinct groups: the rubbish dump assemblage and the
levelling layer assemblage.
In the rubbish dump almost all categories of pottery are
represented, both in the typological and functional sense (table
and kitchen wares). Domestic wares are definitely in the majority,
with such shapes as pails, bowls of all kinds and sizes, amphorae
and cooking pots predominating. Tablewares are represented
almost exclusively by Egyptian products, most of them made of
Nile silt (imitations of North African forms Hayes 83, 84, 91,