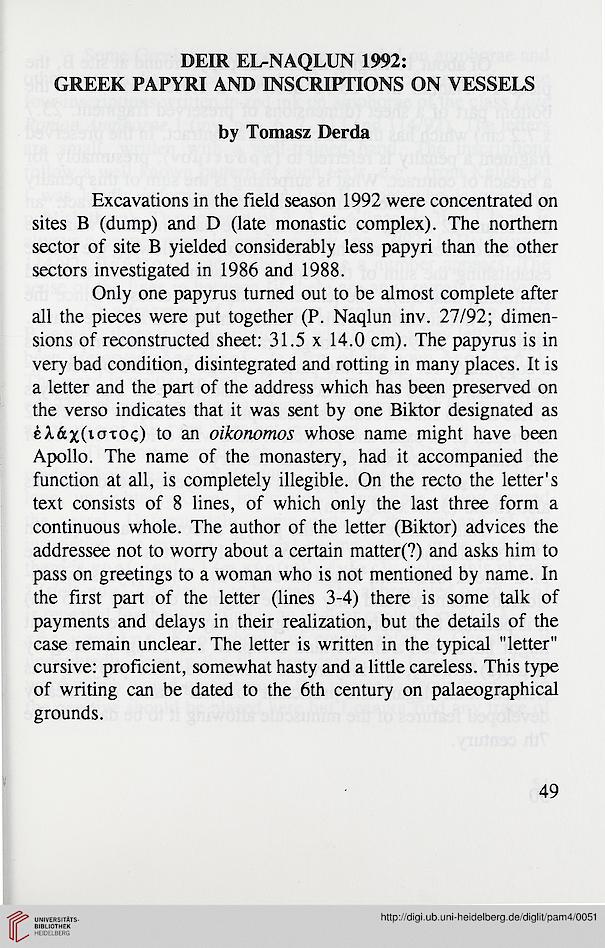 Excavations in the field season 1992 were concentrated on
sites B (dump) and D (late monastic complex). The northern
sector of site B yielded considerably less papyri than the other
sectors investigated in 1986 and 1988.
Only one papyrus turned out to be almost complete after
all the pieces were put together (P. Naqlun inv. 27/92; dimen-
sions of reconstructed sheet; 31.5 x 14.0 cm). The papyrus is in
very bad condition, disintegrated and rotting in many places. It is
a letter and the part of the address which has been preserved on
the verso indicates that it was sent by one Biktor designated as
cA&x(t<no<;) ^ an whose name might have been
Apollo. The name of the monastery, had it accompanied the
function at all, is completely illegible. On the recto the letter's
text consists of 8 lines, of which only the last three form a
continuous whole. The author of the letter (Biktor) advices the
addressee not to worry about a certain matter(?) and asks him to
pass on greetings to a woman who is not mentioned by name. In
the first part of the letter (lines 3-4) there is some talk of
payments and delays in their realization, but the details of the
case remain unclear. The letter is written in the typical "letter"
cursive: proficient, somewhat hasty and a little careless. This type
of writing can be dated to the 6th century on palaeographical
grounds.