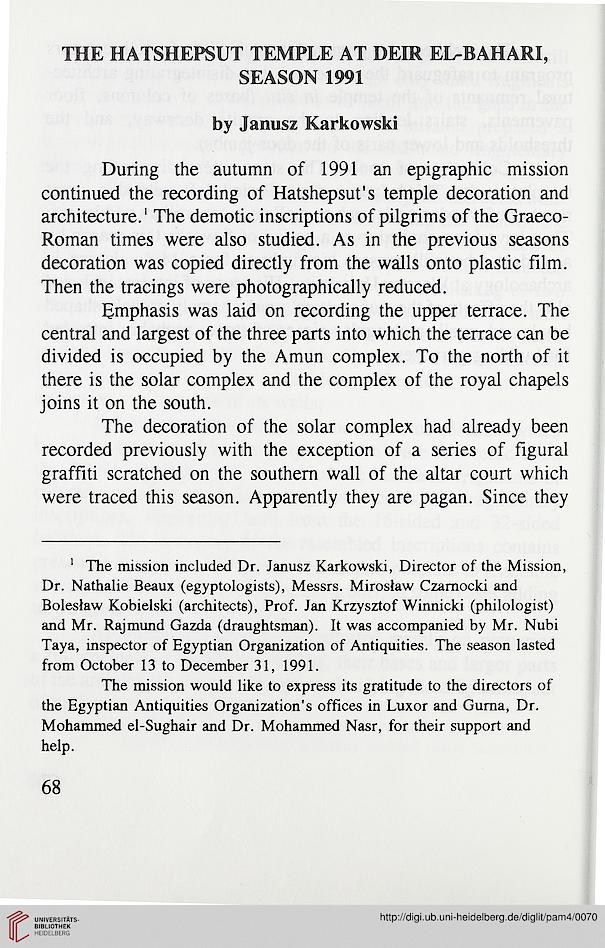 by Janusz Karkowski
During the autumn of 1991 an epigraphic mission
continued the recording of Hatshepsut's temple decoration and
architecture.' The demotic inscriptions of pilgrims of the Graeco-
Roman times were also studied. As in the previous seasons
decoration was copied directly from the walls onto plastic film.
Then the tracings were photographically reduced.
Emphasis was laid on recording the upper terrace. The
central and largest of the three parts into which the terrace can be
divided is occupied by the Amun complex. To the north of it
there is the solar complex and the complex of the royal chapels
joins it on the south.
The decoration of the solar complex had already been
recorded previously with the exception of a series of figural
graffiti scratched on the southern wall of the altar court which
were traced this season. Apparently they are pagan. Since they

' The mission included Dr. Janusz Karkowski, Director of the Mission,
Dr. Nathalie Beaux (egyptologists), Messrs. Miroslaw Czamocki and
Boleslaw Kobielski (architects), Prof. Jan Krzysztof Winnicki (philologist)
and Mr. Rajmund Gazda (draughtsman). It was accompanied by Mr. Nubi
Taya, inspector of Egyptian Organization of Antiquities. The season lasted
from October 13 to December 31, 1991.
The mission would like to express its gratitude to the directors of
the Egyptian Antiquities Organization's offices in Luxor and Guma, Dr.
Mohammed el-Sughair and Dr. Mohammed Nasr, for their support and
help.