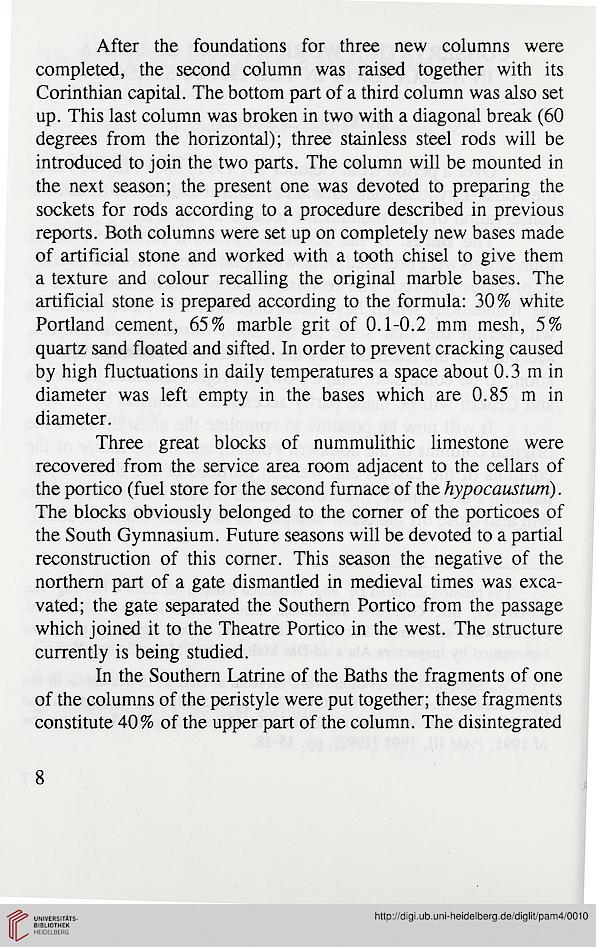 Information about OCR text
After the foundations for three new columns were
completed, the second column was raised together with its
Corinthian capital. The bottom part of a third column was also set
up. This last column was broken in two with a diagonal break (60
degrees from the horizontal); three stainless steel rods will be
introduced to join the two parts. The column will be mounted in
the next season; the present one was devoted to preparing the
sockets for rods according to a procedure described in previous
reports. Both columns were set up on completely new bases made
of artificial stone and worked with a tooth chisel to give them
a texture and colour recalling the original marble bases. The
artificial stone is prepared according to the formula: 30% white
Portland cement, 65% marble grit of 0.1-0.2 mm mesh, 5%
quartz sand floated and sifted. In order to prevent cracking caused
by high fluctuations in daily temperatures a space about 0.3 m in
diameter was left empty in the bases which are 0.85 m in
diameter.
Three great blocks of nummulithic limestone were
recovered from the service area room adjacent to the cellars of
the portico (fuel store for the second furnace of the /lypocaMjm/n).
The blocks obviously belonged to the comer of the porticoes of
the South Gymnasium. Future seasons will be devoted to a partial
reconstruction of this comer. This season the negative of the
northern part of a gate dismantled in medieval times was exca-
vated; the gate separated the Southern Portico from the passage
which joined it to the Theatre Portico in the west. The structure
currently is being studied.
In the Southern Latrine of the Baths the fragments of one
of the columns of the peristyle were put together; these fragments
constitute 40% of the upper part of the column. The disintegrated