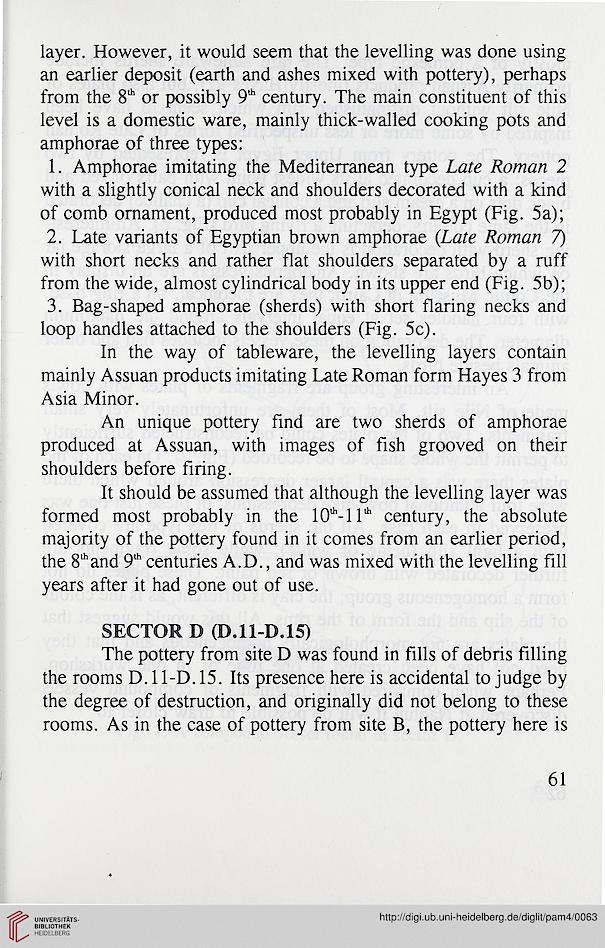 Information about OCR text
layer. However, it would seem that the levelling was done using
an earlier deposit (earth and ashes mixed with pottery), perhaps
from the 8^ or possibly 9** century. The main constituent of this
level is a domestic ware, mainly thick-walled cooking pots and
amphorae of three types:
1. Amphorae imitating the Mediterranean type Roman 2
with a slightly conical neck and shoulders decorated with a kind
of comb ornament, produced most probably in Egypt (Fig. 5a);
2. Late variants of Egyptian brown amphorae (Fare Roman 7)
with short necks and rather flat shoulders separated by a ruff
from the wide, almost cylindrical body in its upper end (Fig. 5b);
3. Bag-shaped amphorae (sherds) with short flaring necks and
loop handles attached to the shoulders (Fig. 5c).
In the way of tableware, the levelling layers contain
mainly Assuan products imitating Late Roman form Hayes 3 from
Asia Minor.
An unique pottery find are two sherds of amphorae
produced at Assuan, with images of fish grooved on their
shoulders before Bring.
It should be assumed that although the levelling layer was
formed most probably in the 10^-11^ century, the absolute
majority of the pottery found in it comes from an earlier period,
the 8^ and 9^ centuries A.D., and was mixed with the levelling fill
years after it had gone out of use.
SECTOR D (D.11-D.15)
The pottery from site D was found in fills of debris filling
the rooms D. 11-D. 15. Its presence here is accidental to judge by
the degree of destruction, and originally did not belong to these
rooms. As in the case of pottery from site B, the pottery here is