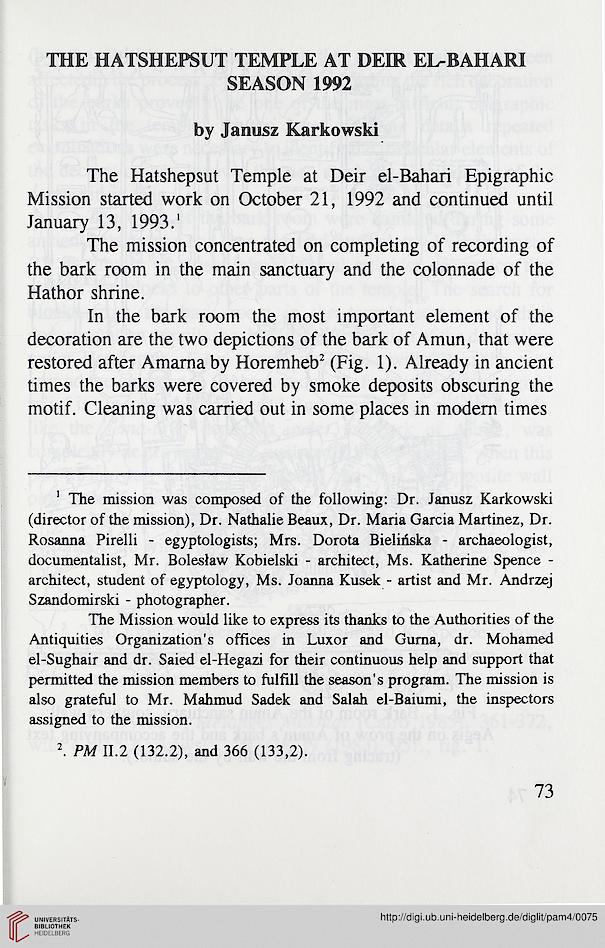 by Janusz Karkowski
The Hatshepsut Temple at Deir el-Bahari Epigraphic
Mission started work on October 21, 1992 and continued until
January 13, 1993.'
The mission concentrated on completing of recording of
the bark room in the main sanctuary and the colonnade of the
Hathor shrine.
In the bark room the most important element of the
decoration are the two depictions of the bark of Amun, that were
restored after Amama by Horemheb^ (Fig. 1). Already in ancient
times the barks were covered by smoke deposits obscuring the
motif. Cleaning was carried out in some places in modem times

' The mission was composed of the following: Dr. Janusz Karkowski
(director of the mission), Dr. Nathalie Beaux, Dr. Maria Garcia Martinez, Dr.
Rosanna Pirelli - egyptologists; Mrs. Dorota Bielihska - archaeologist,
documentalist, Mr. Boleslaw Kobielski - architect, Ms. Katherine Spence -
architect, student of egyptology, Ms. Joanna Kusek - artist and Mr. Andrzej
Szandomirski - photographer.
The Mission would like to express its thanks to the Authorities of the
Antiquities Organization's offices in Luxor and Guma, dr. Mohamed
el-Sughair and dr. Saied el-Hegazi for their continuous help and support that
permitted the mission members to fulfill the season's program. The mission is
also grateful to Mr. Mahmud Sadek and Salah el-Baiumi, the inspectors
assigned to the mission.
i. PM 11.2 (132.2), and 366 (133,2).