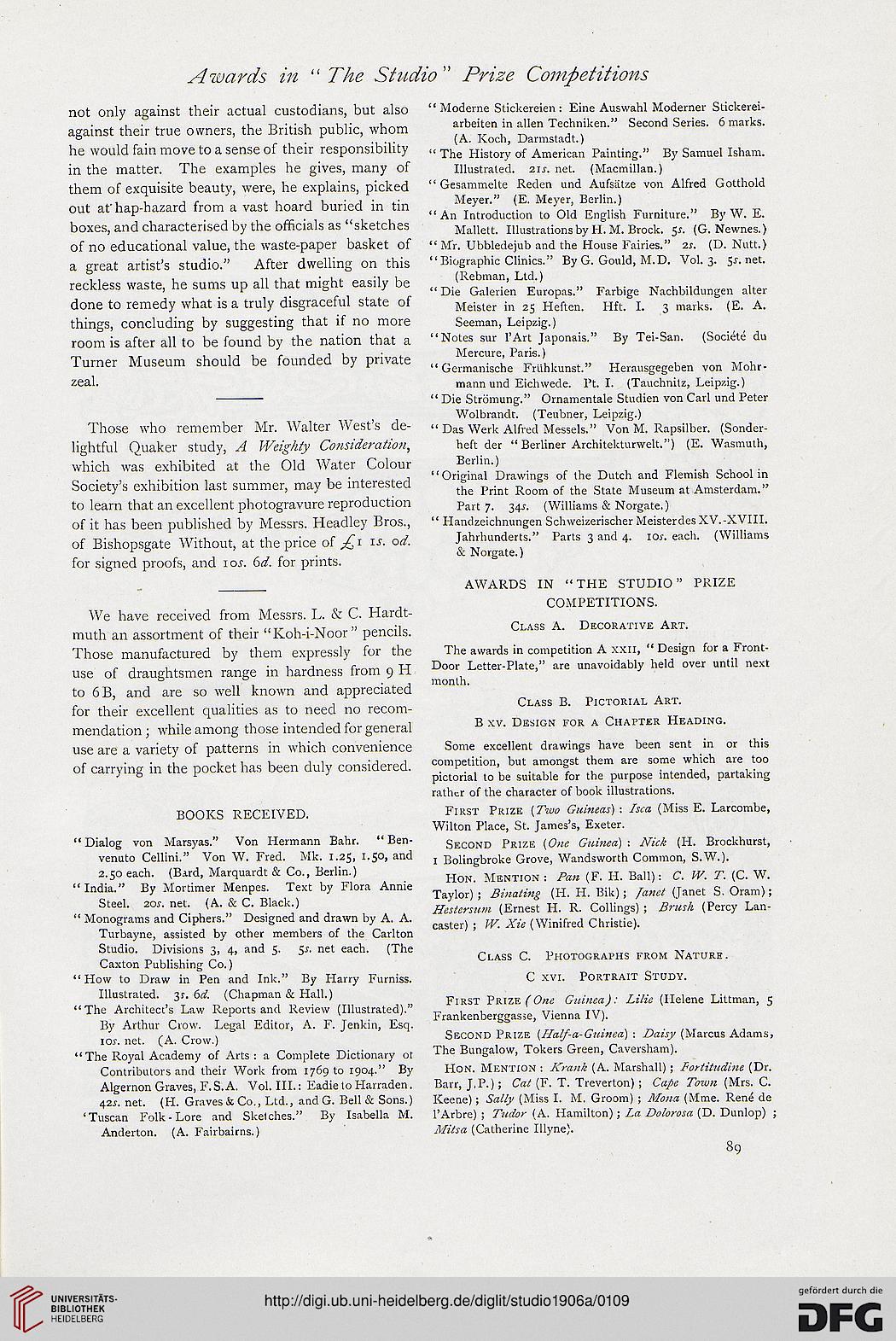 not only against their actual custodians, but also
against their true owners, the British public, whom
he would fain move to a sense of their responsibility
in the matter. The examples he gives, many of
them of exquisite beauty, were, he explains, picked
out at'hap-hazard from a vast hoard buried in tin
boxes, and characterised by the officials as "sketches
of no educational value, the waste-paper basket of
a great artist's studio." After dwelling on this
reckless waste, he sums up all that might easily be
done to remedy what is a truly disgraceful state of
things, concluding by suggesting that if no more
room is after all to be found by the nation that a
Turner Museum should be founded by private
zeal.

Those who remember Mr. Walter West's de-
lightful Quaker study, A Weighty Consideration,
which was exhibited at the Old Water Colour
Society's exhibition last summer, may be interested
to learn that an excellent photogravure reproduction
of it has been published by Messrs. Headley Bros.,
of Bishopsgate Without, at the price of £i is. od.
for signed proofs, and icw. 6d. for prints.

We have received from Messrs. L. & C. Hardt-
muth an assortment of their "Koh-i-Noor" pencils.
Those manufactured by them expressly for the
use of draughtsmen range in hardness from 9 H
to 6B, and are so well known and appreciated
for their excellent qualities as to need no recom-
mendation ; while among those intended for general
use are a variety of patterns in which convenience
of carrying in the pocket has been duly considered.

Turbayne, assisted by other members of the Carlton

Caxton Publishing Co.)
"How to Draw in Pen and Ink." By Harry Furniss.

\os. net. (A. Crow.)
"The Royal Academy of Arts : a Complete Dictionary ot

(A. Koch, Darmstadt.)
" The History of American Painting." By Samuel Isham.

"Original Drawings of the Dutch and Flemish School in

the Print Room of the State Museum at Amsterdam."

AWARDS IN "THE STUDIO" PRIZE
COMPETITIONS.
Class A. Decorative Art.

The awards in competition A xxii, " Design for a Front-
Door Letter-Plate," are unavoidably held over until next
month.

Class B. Pictorial Art.
B xv. Design for a Chapter Heading.

Some excellent drawings have been sent in or this
competition, but amongst them are some which are too
pictorial to be suitable for the purpose intended, partaking
rather of the character of book illustrations.