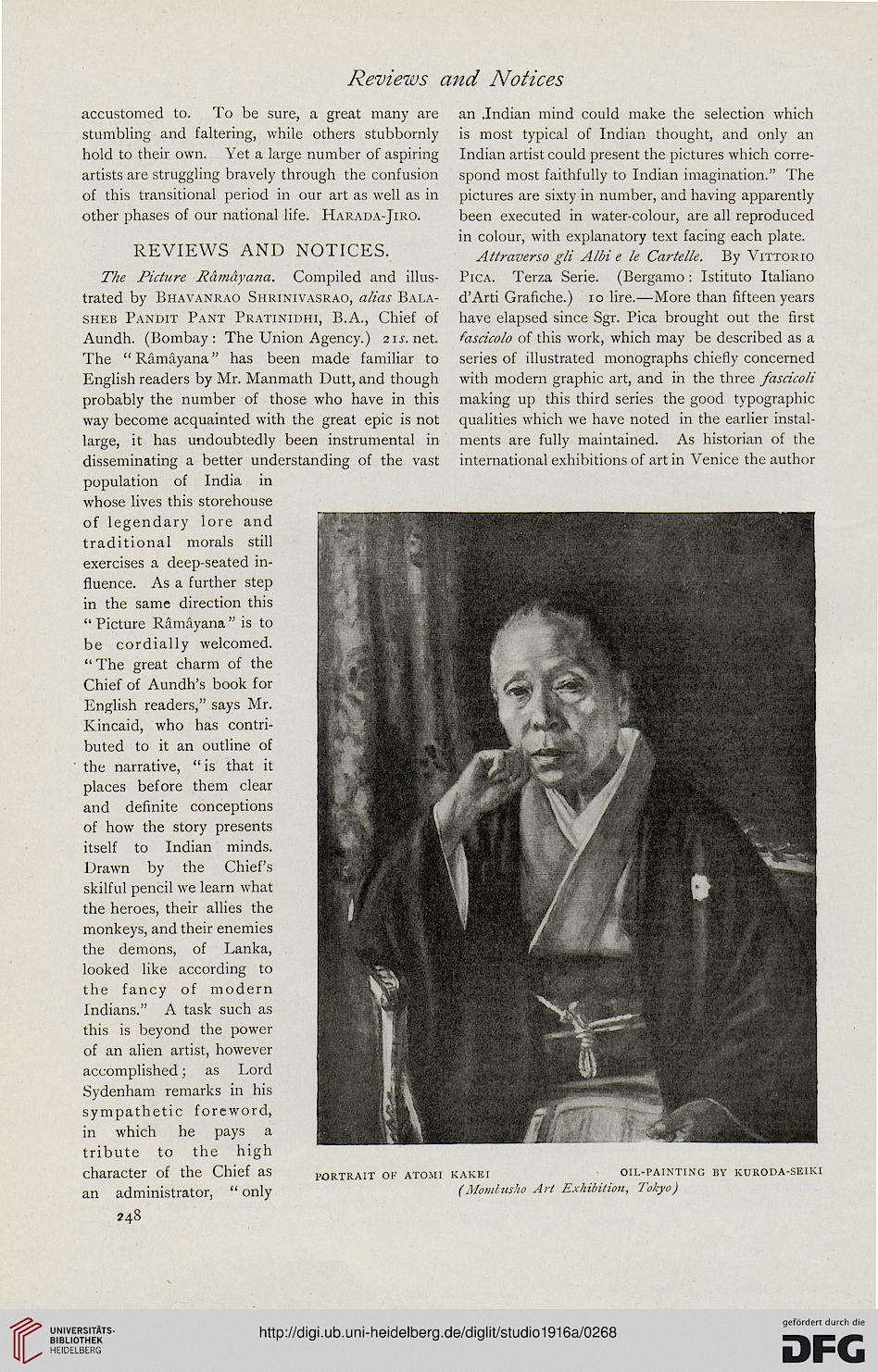 accustomed to. To be sure, a great many are an .Indian mind could make the selection which
stumbling and faltering, while others stubbornly is most typical of Indian thought, and only an
hold to their own. Yet a large number of aspiring Indian artist could present the pictures which corre-
artists are struggling bravely through the confusion spond most faithfully to Indian imagination." The
of this transitional period in our art as well as in pictures are sixty in number, and having apparently
other phases of our national life. Harada-Jiro. been executed in water-colour, are all reproduced

The Picture RAmayana. Compiled and illus- Pica. Terza Serie. (Bergamo: Istituto Italiano
trated by Bhavanrao Shrinivasrao, alias Bala- d'Arti Grafiche.) 10 lire.—More than fifteen years
sheb Pandit Pant Pratinidhi, B.A., Chief of have elapsed since Sgr. Pica brought out the first
Aundh. (Bombay: The Union Agency.) 21^. net. fascicolo of this work, which may be described as a
The " Ramayana" has been made familiar to series of illustrated monographs chiefly concerned
English readers by Mr. Manmath Dutt, and though with modern graphic art, and in the three fascicoli
probably the number of those who have in this making up this third series the good typographic
way become acquainted with the great epic is not qualities which we have noted in the earlier instal-
large, it has undoubtedly been instrumental in ments are fully maintained. As historian of the
disseminating a better understanding of the vast international exhibitions of art in Venice the author
population of India in
whose lives this storehouse
of legendary lore and
traditional morals still
exercises a deep-seated in-
fluence. As a further step
in the same direction this
"Picture Ramayana" is to
be cordially welcomed.
"The great charm of the

the narrative, "is that it
places before them clear
and definite conceptions

Drawn by the Chief's if*

skilful pencil we learn what |£C

the heroes, their allies the H I

monkeys, and their enemies Ifc*

the demons, of Lanka,

the fancy of modern

Indians." A task such as

this is beyond the power

of an alien artist, however

tribute to the high

character of the Chief as portrait ov ato.mi kakei oil-painting by kuroda-seiki