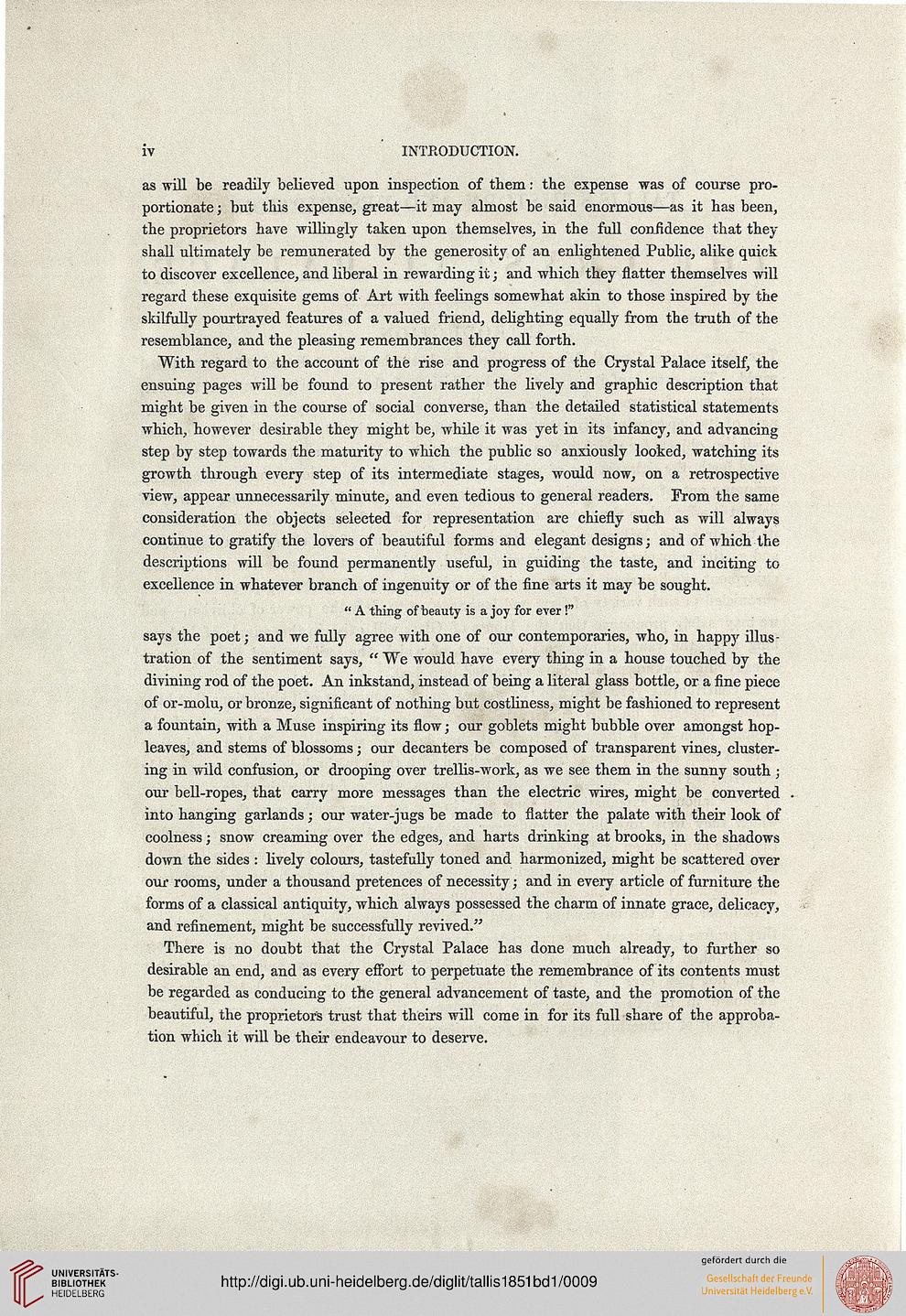 as will be readily believed upon inspection of them.: the expense was of course pro-
portionate ; but this expense, great—it may almost be said enormous—as it has been,
the proprietors have willingly taken upon themselves, in the full confidence that they
shall ultimately be remunerated by the generosity of an enlightened Public, alike quick
to discover excellence, and liberal in rewarding it; and which they flatter themselves will
regard these exquisite gems of Art with feelings somewhat akin to those inspired by the
skilfully pourtrayed features of a valued friend, delighting equally from the truth of the
resemblance, and the pleasing remembrances they call forth.

With regard to the account of the rise and progress of the Crystal Palace itself, the
ensuing pages will be found to present rather the lively and graphic description that
might be given in the course of social converse, than the detailed statistical statements
which, however desirable they might be, while it was yet in its infancy, and advancing
step by step towards the maturity to which the public so anxiously looked, watching its
growth through every step of its intermediate stages, would now, on a retrospective
view, appear unnecessarily minute, and even tedious to general readers. From the same
consideration the objects selected for representation are chiefly such as will always
continue to gratify the lovers of beautiful forms and elegant designs; and of which the
descriptions will be found permanently useful, in guiding the taste, and inciting to
excellence in whatever branch of ingenuity or of the fine arts it may be sought.

" A thing of beauty is a joy for ever !"
says the poet; and we fully agree with one of our contemporaries, who, in happy illus-
tration of the sentiment says, " We would have every thing in a house touched by the
divining rod of the poet. An inkstand, instead of being a literal glass bottle, or a fine piece
of or-molu, or bronze, significant of nothing but costliness, might be fashioned to represent
a fountain, with a Muse inspiring its flow; our goblets might bubble over amongst hop-
leaves, and stems of blossoms j our decanters be composed of transparent vines, cluster-
ing in wild confusion, or drooping over trellis-work, as we see them in the sunny south ;
our bell-ropes, that carry more messages than the electric wires, might be converted
into hanging garlands; our water-jugs be made to flatter the palate with their look of
coolness; snow creaming over the edges, and harts drinking at brooks, in the shadows
down the sides : lively colours, tastefully toned and harmonized, might be scattered over
our rooms, under a thousand pretences of necessity; and in every article of furniture the
forms of a classical antiquity, which always possessed the charm of innate grace, delicacy,
and refinement, might be successfully revived."

There is no doubt that the Crystal Palace has done much already, to further so
desirable an end, and as every effort to perpetuate the remembrance of its contents must
be regarded as conducing to the general advancement of taste, and the promotion of the
beautiful, the proprietor's trust that theirs will come in for its full share of the approba-
tion which it will be their endeavour to deserve.