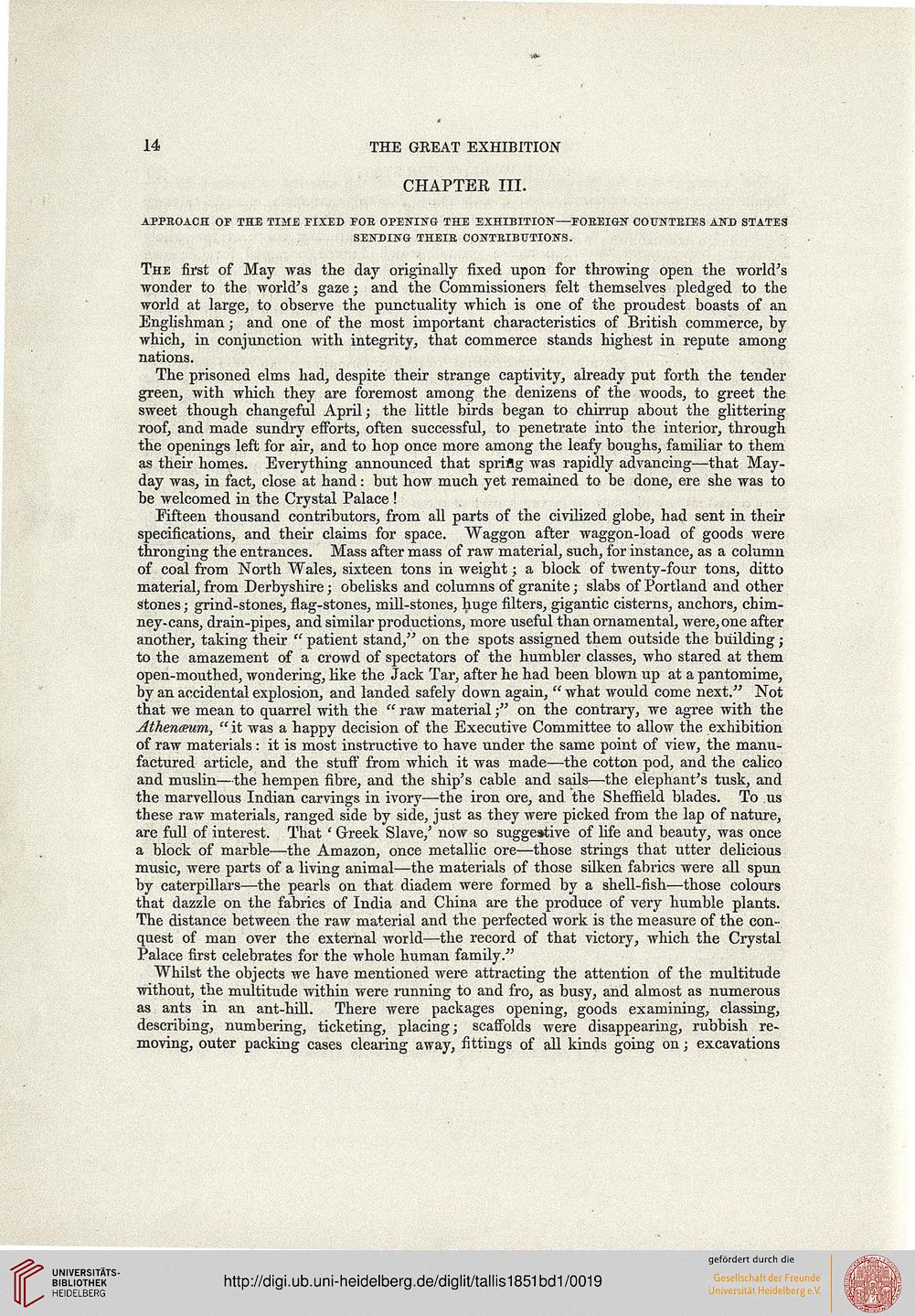 The first of May was the day originally fixed upon for throwing open the world's
wonder to the world's gaze; and the Commissioners felt themselves pledged to the
world at large, to observe the punctuality which is one of the proudest boasts of an
Englishman; and one of the most important characteristics of British commerce, by
which, in conjunction with integrity, that commerce stands highest in repute among
nations.

The prisoned elms had, despite their strange captivity, already put forth the tender
green, with which they are foremost among the denizens of the woods, to greet the
sweet though changeful April; the little birds began to chirrup about the glittering
roof, and made sundry efforts, often successful, to penetrate into the interior, through
the openings left for air, and to hop once more among the leafy boughs, familiar to them
as their homes. Everything announced that spriflg was rapidly advancing—that May-
day was, in fact, close at hand: but how much yet remained to be done, ere she was to
be welcomed in the Crystal Palace ! ■ .

Kfteen thousand contributors, from all parts of the civilized globe, had sent in their
specifications, and their claims for space. Waggon after waggon-load of goods were
thronging the entrances. Mass after mass of raw material, such, for instance, as a column
of coal from North Wales, sixteen tons in weight; a block, of twenty-four tons, ditto
material, from Derbyshire; obelisks and columns of granite; slabs of Portland and other
stones; grind-stones, flag-stones, mill-stones, huge filters, gigantic cisterns, anchors, chim-
ney-cans, drain-pipes, and similar productions, more useful than ornamental, were,one after
another, taking their " patient stand," on the spots assigned them outside the building;
to the amazement of a crowd of spectators of the humbler classes, who stared at them
open-mouthed, wondering, like the Jack Tar, after he had been blown up at a pantomime,
by an accidental explosion, and landed safely down again, " what would come next." Not
that we mean to quarrel with the " raw material;" on the contrary, we agree with the
Athenaum, "it was a happy decision of the Executive Committee to allow the exhibition
of raw materials: it is most instructive to have under the same point of view, the manu-
factured article, and the stuff from which it was made-—the cotton pod, and the calico
and muslin—the hempen fibre, and the ship's cable and sails—the elephant's tusk, and
the marvellous Indian carvings in ivory—the iron ore, and the Sheffield blades. To us
these raw materials, ranged side by side, just as they were picked from the lap of nature,
are full of interest. That (Greek Slave,' now so suggestive of life and beauty, was once
a block of marble—the Amazon, once metallic ore—those strings that utter delicious
music, were parts of a living animal—the materials of those silken fabrics were all spun
by caterpillars—the pearls on that diadem were formed by a shell-fish—those colours
that dazzle on the fabrics of India and China are the produce of very humble plants.
The distance between the raw material and the perfected work is the measure of the con-
quest of man over the external world—the record of that victory, which the Crystal
Palace first celebrates for the whole human family."

Whilst the objects we have mentioned were attracting the attention of the multitude
without, the multitude within were running to and fro, as busy, and almost as numerous
as ants in an ant-hill. There were packages opening, goods examining, classing,
describing, numbering, ticketing, placing; scaffolds were disappearing, rubbish re-
moving, outer packing cases clearing away, fittings of all kinds going on; excavations