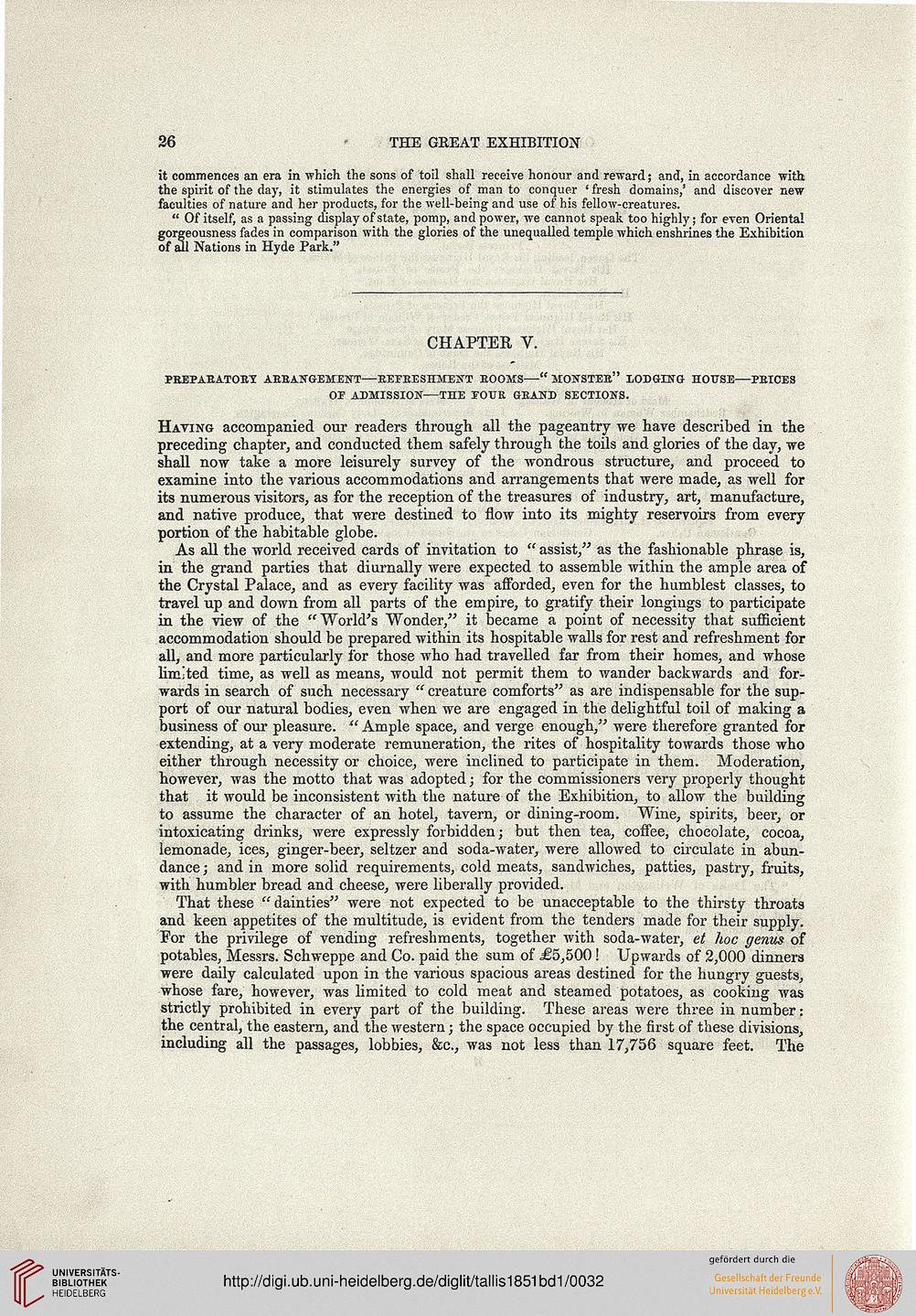 it commences an era in -which the sons of toil shall receive honour and reward; and, in accordance with
the spirit of the day, it stimulates the energies of man to conquer 'fresh domains/ and discover new
faculties of nature and her products, for the well-being and use of his fellow-creatures.

" Of itself, as a passing display of state, pomp, and power, we cannot speak too highly; for even Oriental
gorgeousness fades in comparison with the glories of the unequalled temple which enshrines the Exhibition
of all Nations in Hyde Park."

Hating accompanied our readers through all the pageantry we have described in the
preceding chapter, and conducted them safely through the toils and glories of the day, we
shall now take a more leisurely survey of the wondrous structure, and proceed to
examine into the various accommodations and arrangements that were made, as well for
its numerous visitors, as for the reception of the treasures of industry, art, manufacture,
and native produce, that were destined to flow into its mighty reservoirs from every
portion of the habitable globe.

As all the world received cards of invitation to " assist," as the fashionable phrase is,
in the grand parties that diurnally were expected to assemble within the ample area of
the Crystal Palace, and as every facility was afforded, even for the humblest classes, to
travel up and down from all parts of the empire, to gratify their longiugs to participate
in the view of the "World's Wonder," it became a point of necessity that sufficient
accommodation should be prepared within its hospitable walls for rest and refreshment for
all, and more particularly for those who had travelled far from their homes, and whose
limited time, as well as means, would not permit them to wander backwards and for-
wards in search of such necessary "creature comforts" as are indispensable for the sup-
port of our natural bodies, even when we are engaged in the delightful toil of making a
business of our pleasure. " Ample space, and verge enough," were therefore granted for
extending, at a very moderate remuneration, the rites of hospitality towards those who
either through necessity or choice, were inclined to participate in them. Moderation,
however, was the motto that was adopted ; for the commissioners very properly thought
that it would be inconsistent with the nature of the Exhibition, to allow the building
to assume the character of an hotel, tavern, or dining-room. Wine, spirits, beer, or
intoxicating drinks, were expressly forbidden; but then tea, coffee, ehoeolate, cocoa,
lemonade, ices, ginger-beer, seltzer and soda-water, were allowed to circulate in abun-
dance; and in more solid requirements, cold meats, sandwiches, patties, pastry, fruits,
with humbler bread and cheese, were liberally provided.

That these "dainties" were not expected to be unacceptable to the thirsty throats
and keen appetites of the multitude, is evident from the tenders made for their supply.
For the privilege of vending refreshments, together with soda-water, et hoc genus of
potables, Messrs. Schweppe and Co. paid the sum of £5,500! Upwards of 2,000 dinners
were daily calculated upon in the various spacious areas destined for the hungry guests,
whose fare, however, was limited to cold meat and steamed potatoes, as cooking was
strictly prohibited in every part of the building. These areas were three in number:
the central, the eastern, and the western; the space occupied by the first of these divisions,
including all the passages, lobbies, &c, was not less than 17,756 square feet. The