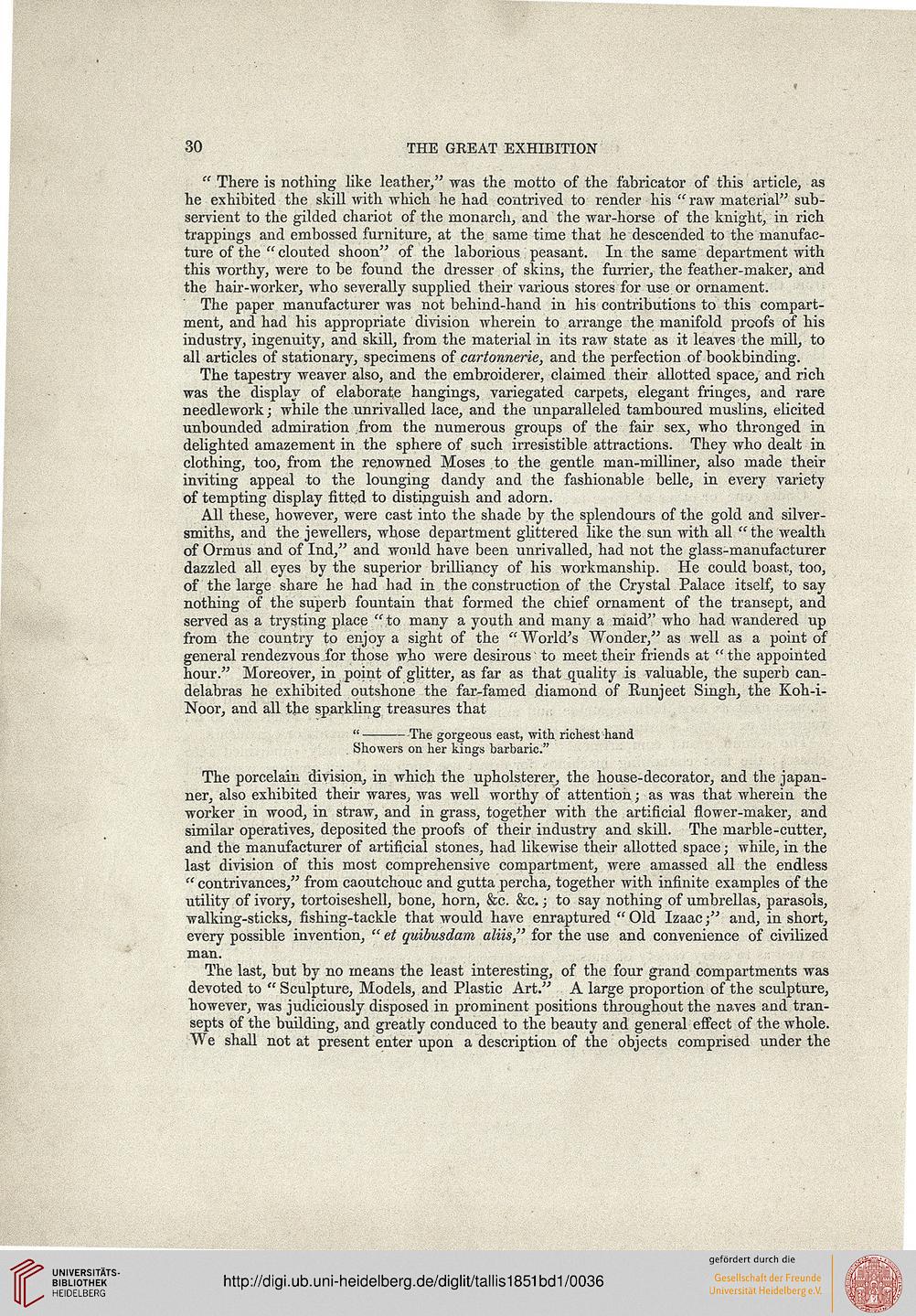 " There is nothing like leather," was the motto of the fabricator of this article, as
he exhibited the skill with which he had contrived to render his "raw material" sub-
servient to the gilded chariot of the monarch, and the war-horse of the knight, in rich
trappings and embossed furniture, at the. same time that he descended to the manufac-
ture of the " clouted shoon" of the laborious peasant. In the same department with
this worthy, were to be found the dresser of skins, the furrier, the feather-maker, and
the hair-worker, who severally supplied their various stores for use or ornament.

The paper manufacturer was not behind-hand in his contributions to this compart-
ment, and had his appropriate division wherein to arrange the manifold proofs of his
industry, ingenuity, and skill, from the material in its raw state as it leaves the mill, to
all articles of stationary, specimens of cartonnerie, and the perfection of bookbinding.

The tapestry weaver also, and the embroiderer, claimed their allotted space, and rich
was the display of elaborate hangings, variegated carpets, elegant fringes, and rare
needlework; while the unrivalled lace, and the unparalleled tamboured muslins, elicited
unbounded admiration from the numerous groups of the fair sex, who thronged in
delighted amazement in the sphere of such irresistible attractions. They who dealt in
clothing, too, from the renowned Moses to the gentle man-milliner, also made their
inviting appeal to the lounging dandy and the fashionable belle, in every variety
of tempting display fitted to distinguish and adorn.

All these, however, were cast into the shade by the splendours of the gold and silver-
smiths, and the jewellers, whose department glittered like the sun with all "the wealth
of Ormus and of Ind," and would have been unrivalled, had not the glass-manufacturer
dazzled all eyes by the superior brilliancy of his workmanship. He could boast, too,
of the large share he had had in the construction of the Crystal Palace itself, to say
nothing of the superb fountain that formed the chief ornament of the transept, and
served as a trysting place "to. many a youth and many a maid" who had wandered up
from the country to enjoy a sight of the "World's Wonder," as well as a point of
general rendezvous for those who were desirous to meet their friends at " the appointed
hour." Moreover, in point of glitter, as far as that quality is valuable, the superb can-
delabras he exhibited outshone the far-famed diamond of Runjeet Singh, the Koh-i-
Noor, and all the sparkling treasures that

. Showers on her kings barbaric."

The porcelain division, in which the upholsterer, the house-decorator, and the japan-
ner, also exhibited their wares, was well worthy of attention; as was that wherein the
worker in wood, in straw, and in grass, together with the artificial flower-maker, and
similar operatives, deposited the proofs of their industry and skill. The marble-cutter,
and the manufacturer of artificial stones, had likewise their allotted space; while, in the
last division of this most comprehensive compartment, were amassed all the endless
" contrivances," from caoutchouc and gutta percha, together with infinite examples of the
utility of ivory, tortoiseshell, bone, horn, &c. &c.; to say nothing of umbrellas, parasols,
walking-sticks, fishing-tackle that would have enraptured " Old Izaac;" and, in short,
every possible invention, " et quibusdam aliis," for the use and convenience of civilized
man.

The last, but by no means the least interesting, of the four grand compartments was
devoted to " Sculpture, Models, and Plastic Art." A large proportion of the sculpture,
however, was judiciously disposed in prominent positions throughout the naves and tran-
septs of the building, and greatly conduced to the beauty and general effect of the whole.
We shall not at present enter upon a description of the objects comprised under the