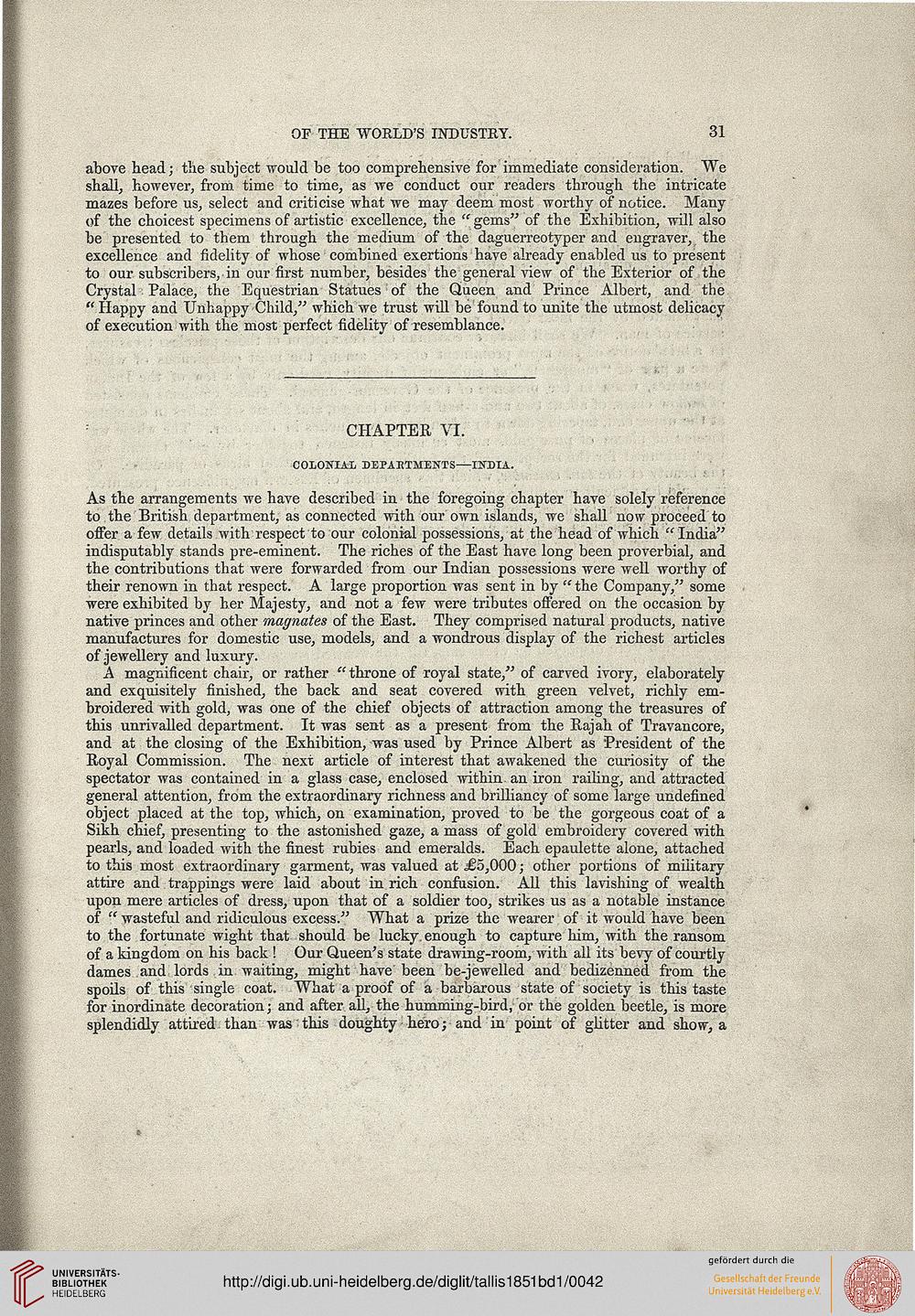 Information about OCR text
OF THE "WORLD'S INDUSTRY. 31

above head; the subject would be too comprehensive for immediate consideration. "We
shall, however, from time to time, as we conduct our readers through the intricate
mazes before us, select and criticise what we may deem most worthy of notice. Many
of the choicest specimens of artistic excellence, the "'gems" of the Exhibition, will also
be presented to them through the medium of the daguerreotyper and engraver, the
excellence and fidelity of whose combined exertions have already enabled us to present
to our subscribers, in our first number, besides the general view of the Exterior of the
Crystal Palace, the Equestrian Statues : of the Queen and Prince Albert, and the
"Happy and Unhappy-Child," which we trust will be found to unite the utmost delicacy
of execution with the most perfect fidelity of resemblance.

As the arrangements we have described in the foregoing chapter have solely reference
to the British department, as connected with our own islands, we shall now proceed to
offer a few details with respect to our colonial possessions, at the head of which " India"
indisputably stands pre-eminent. The riches of the East have long been proverbial, and
the contributions that were forwarded from our Indian possessions were well worthy of
their renown in that respect. A large proportion was sent in by " the Company," some
were exhibited by her Majesty, and not a few were tributes offered on the occasion hj
native princes and other magnates of the East. They comprised natural products, native
manufactures for domestic use, models, and a wondrous display of the richest articles
of jewellery and luxury.

A magnificent chair, or rather " throne of royal state," of carved ivory, elaborately
and exquisitely finished, the back and seat covered with green velvet, richly em-
broidered with gold, was one of the chief objects of attraction among the treasures of
this unrivalled department. It was sent as a present from the Rajah of Travancore,
and at the closing of the Exhibition, was used by Prince Albert as President of the
Royal Commission. The next article of interest that awakened the curiosity of the
spectator was contained in a glass case, enclosed within, an iron railing, and attracted
general attention, from the extraordinary richness and brilliancy of some large undefined
object placed at the top, which, on examination, proved to be the gorgeous coat of a
Sikh chief, presenting to the astonished gaze, a mass of gold embroidery covered with
pearls, and loaded with the finest rubies and emeralds. Each epaulette alone, attached
to this most extraordinary garment, was valued at ^65,000; other portions of military
attire and trappings were laid about in rich confusion. All this lavishing of wealth
upon mere articles of dress, upon that of a soldier too, strikes us as a notable instance
of " wasteful and ridiculous excess/' What a prize the wearer of it would have been
to the fortunate wight that should be lucky, enough to capture him, with the ransom
of a kingdom on his back! Our Queen's state drawing-room, with all its bevy of courtly
dames and lords in waiting, might have been be-jewelled and bedizenned from the
spoils of this single coat. What a proof of a barbarous state of society is this taste
for inordinate decoration; and after all, the humming-bird, or the golden beetle, is more
splendidly attired than was this doughty hero; and in point of glitter and show, a