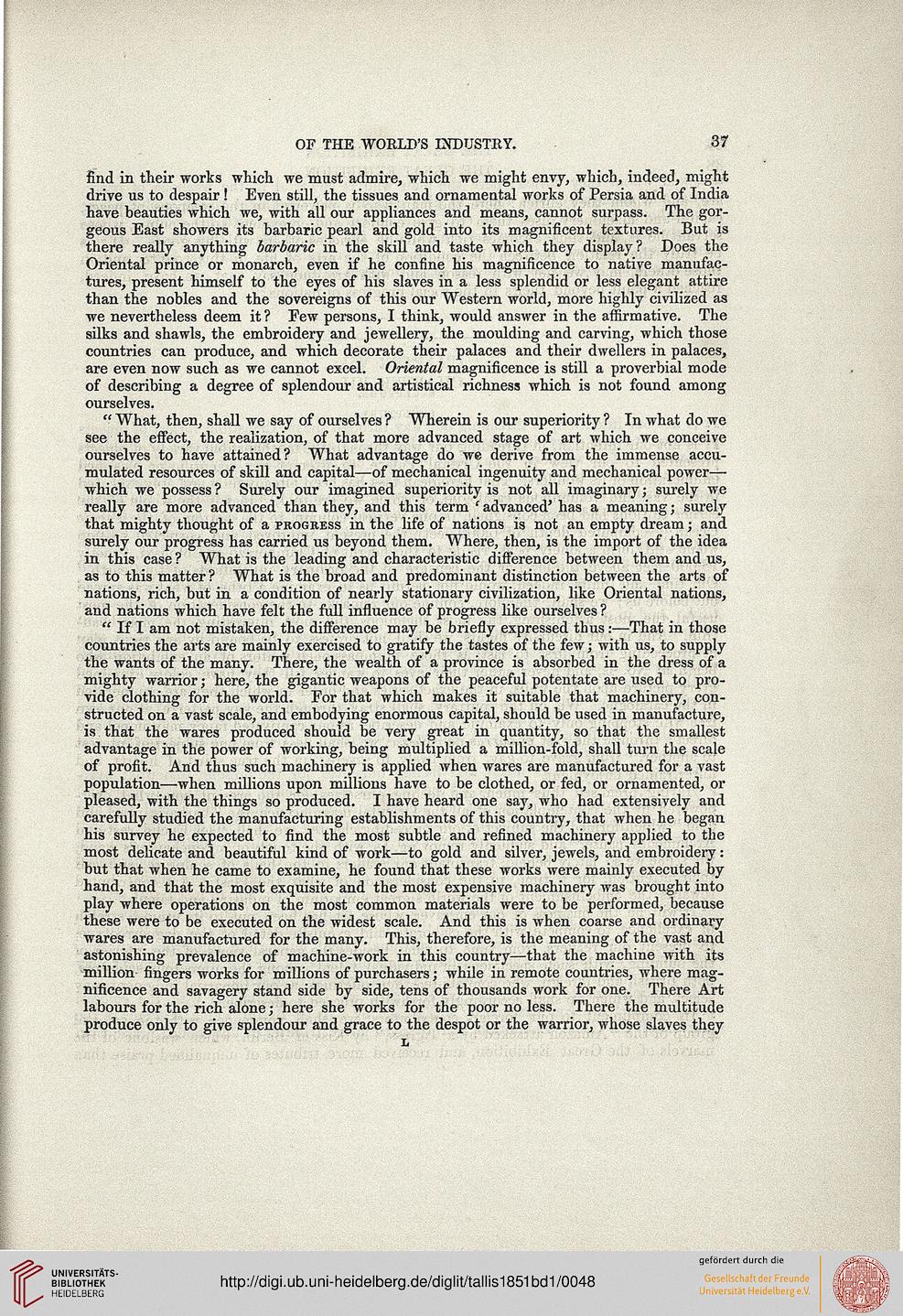 Information about OCR text
OF THE WORID'S INDUSTRY. 37

find In their works which, we must admire, which we might envy, which, indeed, might
drive us to despair! Even still, the tissues and ornamental works of Persia and of India
have beauties which we, with all our appliances and means, cannot surpass. The gor-
geous East showers Its barbaric pearl and gold into its magnificent textures. But is
there really anything barbaric in the skill and taste which they display? Does the
Oriental prince or monarch, even if he confine his magnificence to native manufac-
tures, present himself to the eyes of his slaves in a less splendid or less elegant attire
than the nobles and the sovereigns of this our Western world, more highly civilized as
we nevertheless deem it? Few persons, I think, would answer in the affirmative. The
silks and shawls, the embroidery and jewellery, the moulding and carving, which those
countries can produce, and which decorate their palaces and their dwellers in palaces,
are even now such as we cannot excel. Oriental magnificence is still a proverbial mode
of describing a degree of splendour and artistical richness which is not found among
ourselves.

" What, then, shall we say of ourselves ? Wherein is our superiority ? In what do we
see the effect, the realization, of that more advanced stage of art which we conceive
ourselves to have attained? What advantage do we derive from the immense accu-
mulated resources of skill and capital—of mechanical ingenuity and mechanical power—
which we possess ? Surely our imagined superiority is not all imaginary; surely we
really are more advanced than they, and this term ' advanced' has a meaning; surely
that mighty thought of a progress in the life of nations is not an empty dream; and
surely our progress has carried us beyond them. Where, then, is the import of the idea
in this case? What is the leading and characteristic difference between them and us,
as to this matter? What is the broad and predominant distinction between the arts of
nations, rich, but in a condition of nearly stationary civilization, like Oriental nations,
and nations which have felt the full influence of progress like ourselves ?

" If I am not mistaken, the difference may be briefly expressed thus:—That in those
countries the arts are mainly exercised to gratify the tastes of the few; with us, to supply
the wants of the many. There, the wealth of a province is absorbed in the dress of a
mighty warrior; here, the gigantic weapons of the peaceful potentate are used to pro-
vide clothing for the world. For that which makes it suitable that machinery, con-
structed on a vast scale, and embodying enormous capital, should be used in manufacture,
is.that the wares produced should be very great in quantity, so that the smallest
advantage in the power of working, being multiplied a million-fold, shall turn the scale
of profit. And thus such machinery is applied when wares are manufactured for a vast
population—when millions upon millions have to be clothed, or fed, or ornamented, or
pleased, with the things so produced. I have heard one say, who had extensively and
carefully studied the manufacturing establishments of this country, that when he began
his survey he expected to find the most subtle and refined machinery applied to the
most delicate and beautiful kind of work—to gold and silver, jewels, and embroidery:
but that when he came to examine, he found that these works were mainly executed by
hand, and that the most exquisite and the most expensive machinery was brought into
play where operations on the most common materials were to be performed, because
these were to be executed on the widest scale. And this is when coarse and ordinary
wares are manufactured for the many. This, therefore, is the meaning of the vast and
astonishing prevalence of machine-work in this country—that the machine with its
million fingers works for millions of purchasers; while in remote countries, where mag-
nificence and savagery stand side by side, tens of thousands work for one. There Art
labours for the rich alone; here she works for the poor no less. There the multitude
produce only to give splendour and grace to the despot or the warrior, whose slaves they