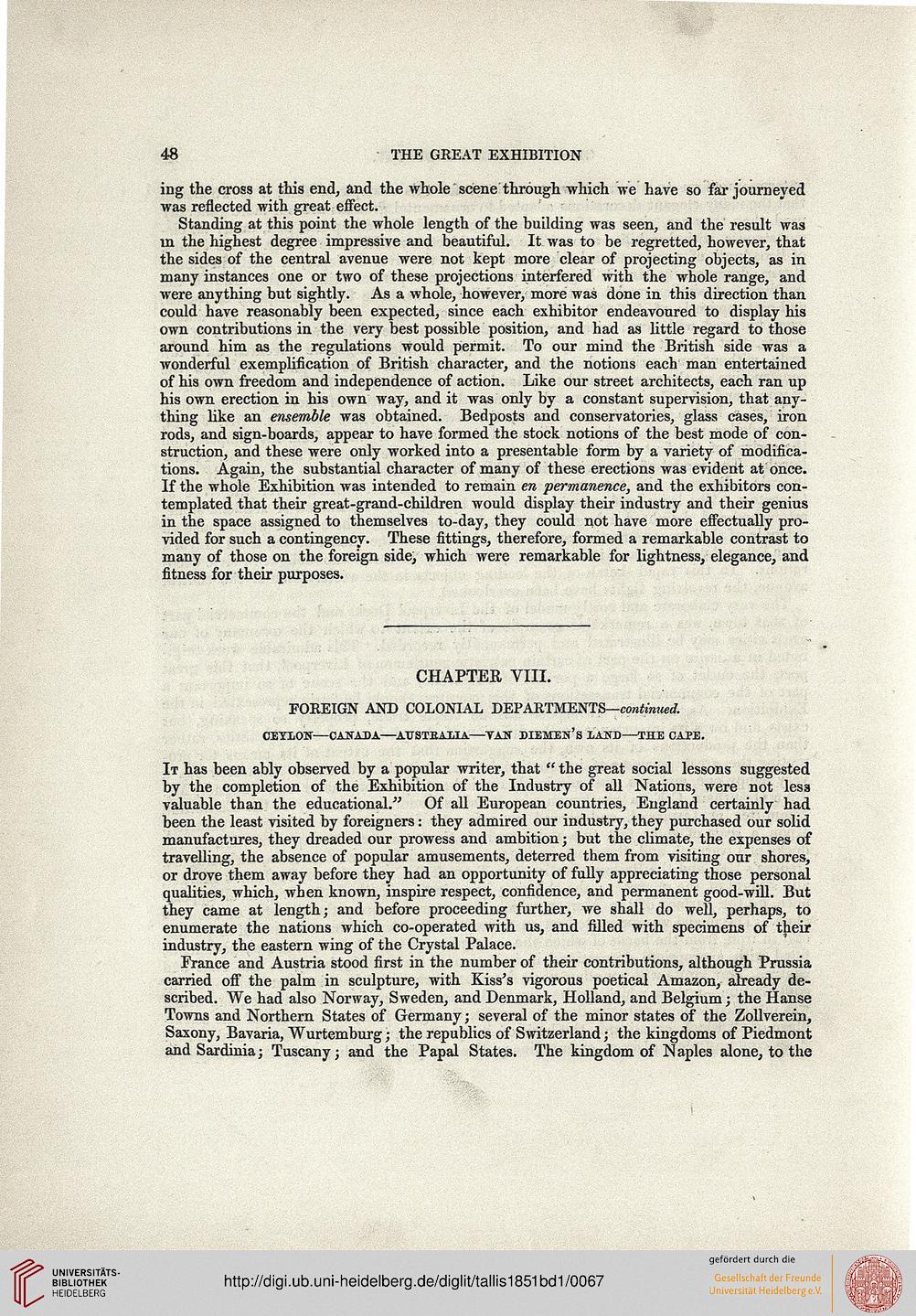 ing the cross at this end, and the whole scene through -which we have so far journeyed
was reflected with great effect.

Standing at this point the whole length of the building was seen, and the result was
in. the highest degree impressive and beautiful. It was to be regretted, however, that
the sides of the central avenue were not kept more clear of projecting objects, as in
many instances one or two of these projections interfered with the whole range, and
were anything but sightly. As a whole, however, more was done in this direction than
could have reasonably been expected, since each exhibitor endeavoured to display his
own contributions in the very best possible position, and had as little regard to those
around him as the regulations would permit. To our mind the British side was a
wonderful exemplification of British character, and the notions each man entertained
of his own freedom and independence of action. Like our street architects, each ran up
his own erection in his own way, and it was only by a constant supervision, that any-
thing like an ensemble was obtained. Bedposts and conservatories, glass cases, iron
rods, and sign-boards, appear to have formed the stock notions of the best mode of con-
struction, and these were only worked into a presentable form by a variety of modifica-
tions. Again, the substantial character of many of these erections was evident at once.
If the whole Exhibition was intended to remain en permanence, and the exhibitors con-
templated that their great-grand-children would display their industry and their genius
in the space assigned to themselves to-day, they could not have more effectually pro-
vided for such a contingency. These fittings, therefore, formed a remarkable contrast to
many of those on the foreign side, which were remarkable for lightness, elegance, and
fitness for their purposes.

It has been ably observed by a popular writer, that " the great social lessons suggested
by the completion of the Exhibition of the Industry of all Nations, were not less
valuable than the educational." Of all European countries, England certainly had
been the least visited by foreigners: they admired our industry, they purchased our solid
manufactures, they dreaded our prowess and ambition; but the climate, the expenses of
travelling, the absence of popular amusements, deterred them from visiting our shores,
or drove them away before they had an opportunity of fully appreciating those personal
qualities, which, when known, inspire respect, confidence, and permanent good-will. But
they came at length; and before proceeding further, we shall do well, perhaps, to
enumerate the nations which co-operated with us, and filled with specimens of their
industry, the eastern wing of the Crystal Palace.

France and Austria stood first in the number of their contributions, although Prussia
carried off the palm in sculpture, with Kiss's vigorous poetical Amazon, already de-
scribed. We had also Norway, Sweden, and Denmark, Holland, and Belgium; the Hanse
Towns and Northern States of Germany; several of the minor states of the Zollverein,
Saxony, Bavaria, Wurtemburg; the republics of Switzerland; the kingdoms of Piedmont
and Sardinia; Tuscany; and the Papal States. The kingdom of Naples alone, to the