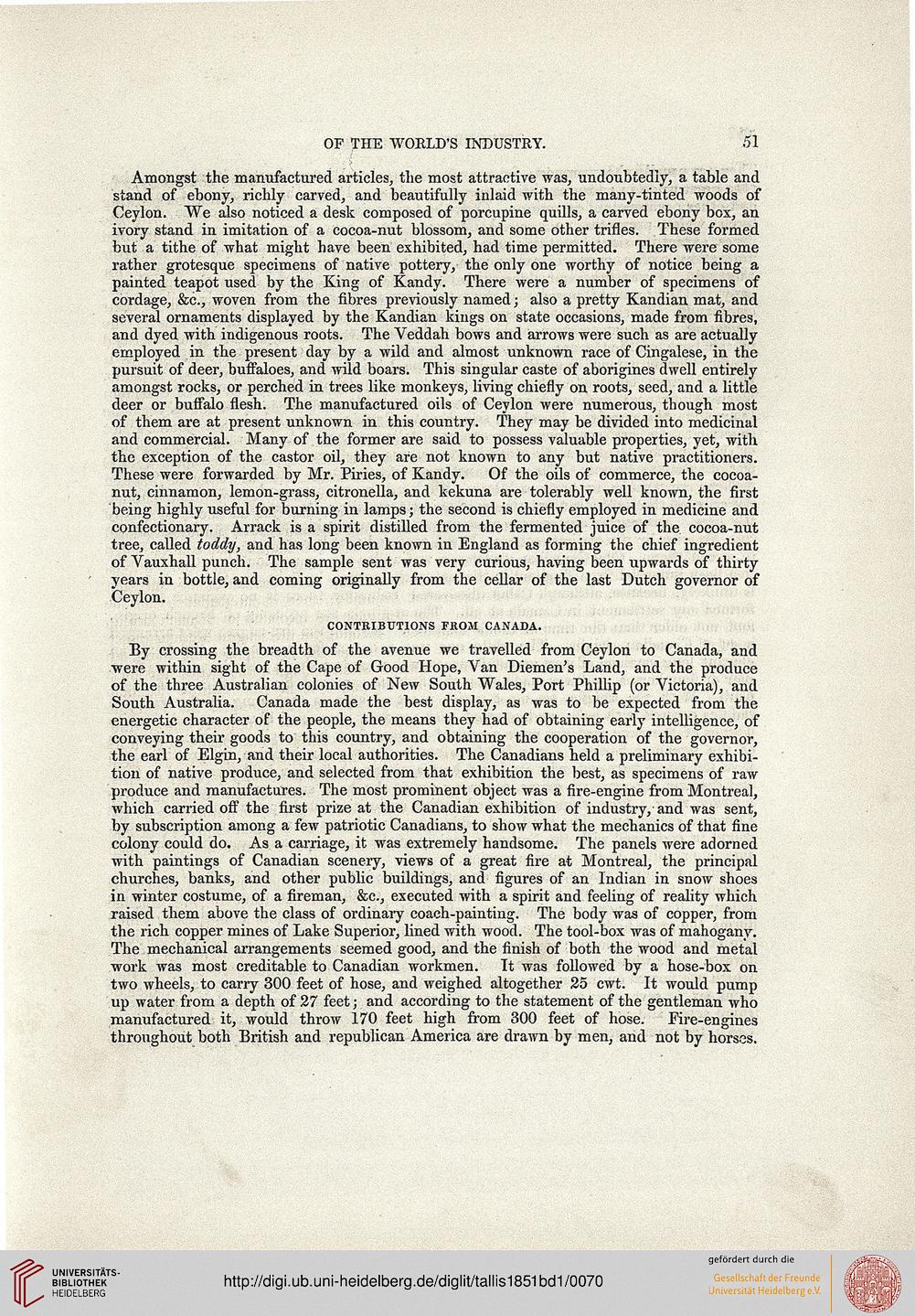 Information about OCR text
OF THE "WORLD'S INDUSTRY. 51

Amongst the manufactured articles, the most attractive was, undoubtedly, a table and
stand of ebony, richly carved, and beautifully inlaid with the many-tinted woods of
Ceylon. We also noticed a desk composed of porcupine quills, a carved ebony box, an
ivory stand in imitation of a cocoa-nut blossom, and some other trifles. These formed
but a tithe of what might have been exhibited, had time permitted. There were some
rather grotesque specimens of native pottery, the only one worthy of notice being a
painted teapot used by the King of Kandy. There were a number of specimens of
cordage, &c, woven from the fibres previously named; also a pretty Kandian mat, and
several ornaments displayed by the Kandian kings on state occasions, made from fibres,
and dyed with indigenous roots. The Veddah bows and iarrows were such as are actually
employed in the present day by a wild and almost unknown race of Cingalese, in the
pursuit of deer, buffaloes, and wild boars. This singular caste of aborigines dwell entirely
amongst rocks, or perched in trees like monkeys, living chiefly on roots, seed, and a little
deer or buifalo flesh. The manufactured oils of Ceylon were numerous, though most
of them are at present unknown in. this country. They may be divided into medicinal
and commercial. Many of the former are said to possess valuable properties, yet, with
the exception of the castor oil, they are not known to any but native practitioners.
These were forwarded by Mr. Piries, of Kandy. Of the oils of commerce, the cocoa-
nut, cinnamon, lemon-grass, citronella, and kekuna are tolerably well known, the first
being highly useful for burning in lamps; the second is chiefly employed in medicine and
confectionary. Arrack is a spirit distilled from the fermented juice of the. cocoa-nut
tree, called toddy, and has long been known in England as forming the chief ingredient
of Vauxhall punch. The sample sent was very curious, having been upwards of thirty
years in bottle, and coming originally from the cellar of the last Dutch governor of
Ceylon.

By crossing the breadth of the avenue we travelled from Ceylon to Canada, and
were within sight of the Cape of Good Hope, Van Diemen's Land, and the produce
of the three Australian colonies of New South Wales, Port Phillip (or Victoria), and
South Australia. Canada made the best display, as was to be expected from the
energetic character of the people, the means they had of obtaining early intelligence, of
conveying their goods to this country, and obtaining the cooperation of the governor,
the earl of Elgin, and their local authorities. The Canadians held a preliminary exhibi-
tion of native produce, and selected from that exhibition the best, as specimens of raw
produce and manufactures. The most prominent object was a fire-engine from Montreal,
which carried off the first prize at the Canadian exhibition of industry, and was sent,
by subscription among a few patriotic Canadians, to show what the mechanics of that fine
colony could do. As a carriage, it was extremely handsome. The panels were adorned
with paintings of Canadian scenery, views of a great fire at Montreal, the principal
churches, banks, and other public buildings, and figures of an Indian in snow shoes
in winter costume, of a fireman, &c, executed with a spirit and feeling of reality which
raised them above the class of ordinary coach-painting. The body was of copper, from
the rich copper mines of Lake Superior, lined with wood. The tool-box was of mahogany.
The mechanical arrangements seemed good, and the finish of both the wood and metal
work was most creditable to Canadian workmen. Tt was followed by a hose-box on
two wheels, to carry 300 feet of hose, and weighed altogether 25 cwt. It would pump
up water from a depth of 27 feetj and according to the statement of the gentleman who
manufactured it, would throw 170 feet high from 300 feet of hose. Eire-engines
throughout both British and republican America are drawn by men, and not by horses.