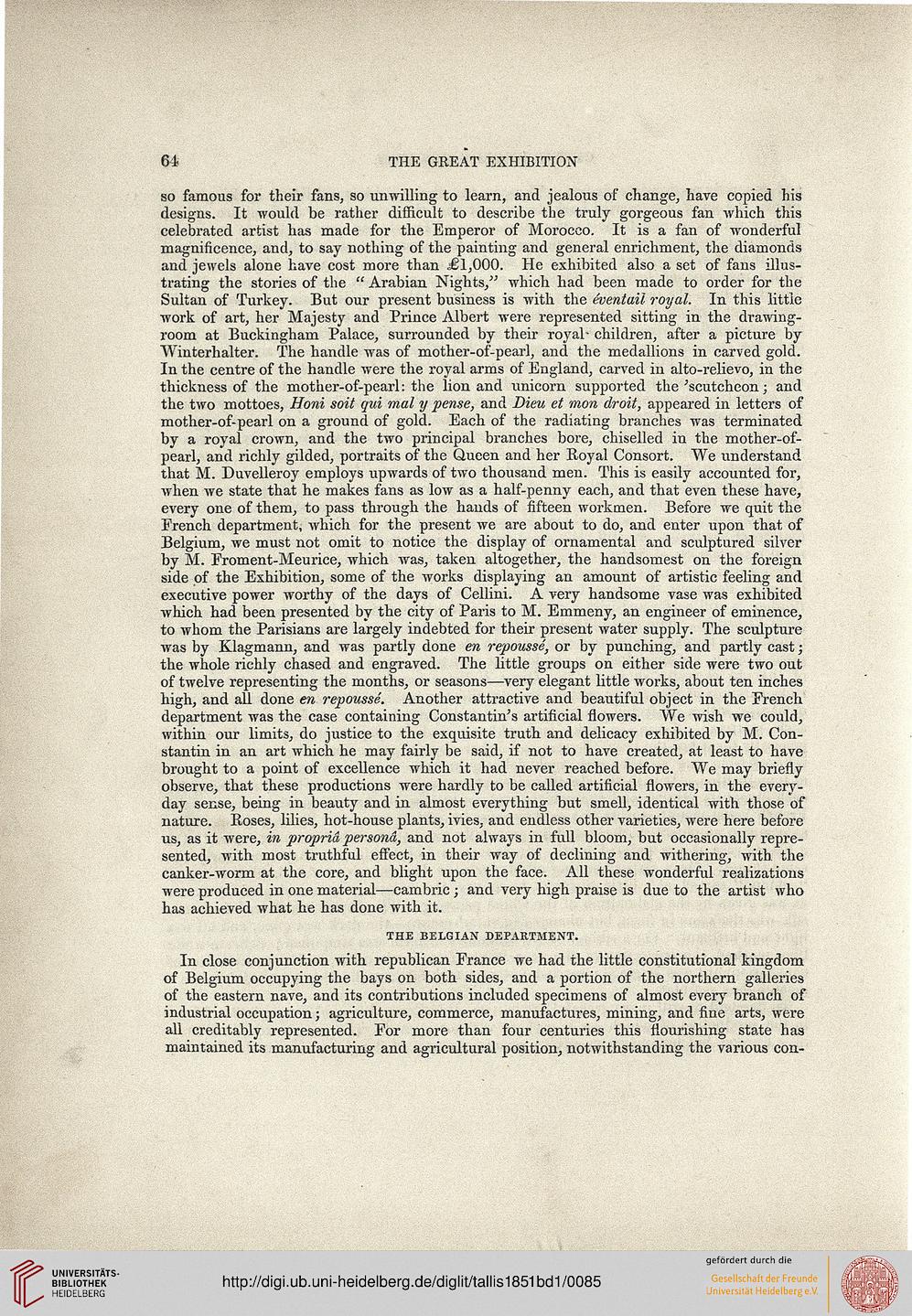 so famous for their fans, so unwilling to learn, and jealous of change, have copied his
designs. It would be rather difficult to describe the truly gorgeous fan which this
celebrated artist has made for the Emperor of Morocco. It is a fan of wonderful
magnificence, and, to say nothing of the painting and general enrichment, the diamonds
and jewels alone have cost more than £1,000. He exhibited also a set of fans illus-
trating the stories of the " Arabian Nights," which had been made to order for the
Sultan of Turkey. But our present business is with the eventutt royal. In this little
work of art, her Majesty and Prince Albert were represented sitting in the drawing-
room at Buckingham Palace, surrounded by their royal- children, after a picture by
Winterhalter. The handle was of mother-of-pearl, and the medallions in carved gold.
In the centre of the handle were the royal arms of England, carved in alto-relievo, in the
thickness of the mother-of-pearl: the lion and unicorn supported the ■'scutcheon; and
the two mottoes, Honi soil qui mal y pense, and Dieu et mon droit, appeared in letters of
mother-of-pearl on a ground of gold. Each of the radiating branches was terminated
by a royal crown, and the two principal branches bore, chiselled in the mother-of-
pearl, and richly gilded, portraits of the Queen and her Royal Consort. We understand
that M. Duvelleroy employs upwards of two thousand men. This is easily accounted for,
when we state that he makes fans as low as a half-penny each, and that even these have,
every one of them, to pass through the hands of fifteen workmen. Before we quit the
Erench department, which for the present we are about to do, and enter upon that of
Belgium, we must not omit to notice the display of ornamental and sculptured silver
by M. Eroment-Meurice, which was, taken altogether, the handsomest on the foreign
side of the Exhibition, some of the works displaying an amount of artistic feeling and
executive power worthy of the days of Cellini. A very handsome vase was exhibited
which had been presented by the city of Paris to M. Emmeny, an engineer of eminence,
to whom the Parisians are largely indebted for their present water supply. The sculpture
was by Klagmann, and was partly done en repousse, or by punching, and partly cast;
the whole richly chased and engraved. The little groups on either side were two out
of twelve representing the months, or seasons—very elegant little works, about ten inches
high, and all done en repousse. Another attractive and beautiful object in the Erench
department was the case containing Constantin's artificial flowers. "We wish we could,
within our limits, do justice to the exquisite truth and delicacy exhibited by M. Con-
stantin in an art which he may fairly be said, if not to have created,, at least to have
brought to a point of excellence which it had never reached before. We may briefly
observe, that these productions were hardly to be called artificial flowers, in the every-
day sense, being in beauty and in almost everything but smell, identical with those of
nature. Roses, lilies, hot-house plants, ivies, and endless other varieties, were here before
us, as it were, in propria persona, and not always in full bloom, but occasionally repre-
sented, with most truthful effect, in their way of declining and withering, with the
canker-worm at the core, and blight upon the face. All these wonderful realizations
were produced in one material—cambric; and very high praise is due to the artist who
has achieved what he has done with it.

In close conjunction with republican Erance we had the little constitutional kingdom
of Belgium occupying the bays on both sides, and a portion of the northern galleries
of the eastern nave, and its contributions included specimens of almost every branch of
industrial occupation; agriculture, commerce, manufactures, mining, and fine arts, were
all creditably represented. For more than four centuries this flourishing state has
maintained its manufacturing and agricultural position, notwithstanding the various con-