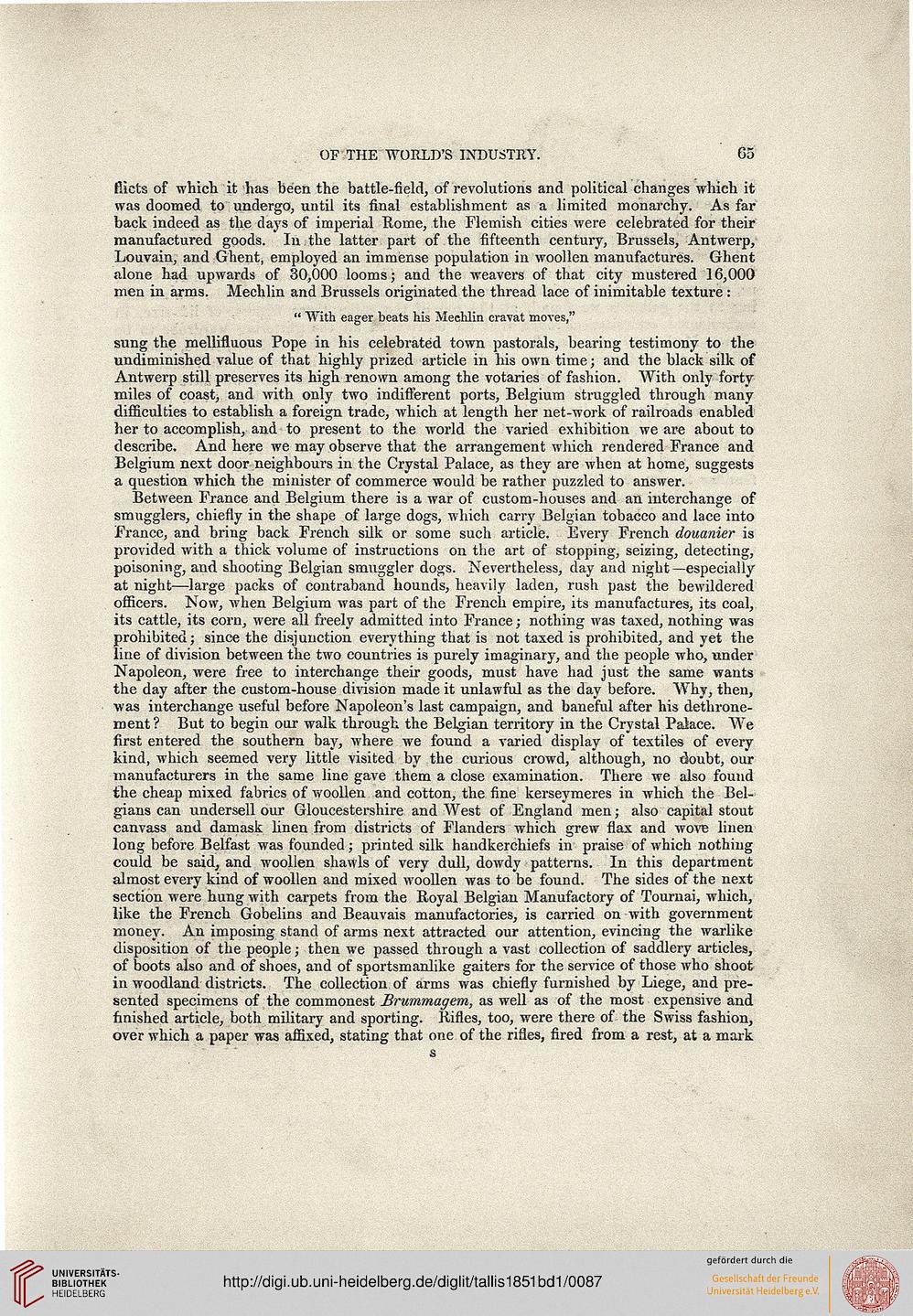 Information about OCR text
OF THE "VTOKXD'S INDUSTRY. 65

fiiets of which, it has been the battle-field, of revolutions and political changes which it
was doomed to undergo, until its final establishment as a limited monarchy. As far
back indeed as the days of imperial Home, the Flemish cities were celebrated for their
manufactured goods. In the latter part of the fifteenth century, Brussels, Antwerp,
Louvain, and Ghent, employed an immense population in woollen manufactures. Ghent
alone had upwards of 30,000 looms; and the weavers of that city mustered 16,000
men in arms. Mechlin and Brussels originated the thread lace of inimitable texture :

sung the mellifluous Pope in his celebrated town pastorals, bearing testimony to the
undiminished value of that highly prized article in his own time; and the black silk of
Antwerp still preserves its high renown among the votaries of fashion. With only forty
miles of coast) and with only two indifferent ports, Belgium struggled through many
difficulties to establish a foreign trade, which at length her net-work of railroads enabled
her to accomplish, and to present to the world the varied exhibition we are about to
describe. And here we may observe that the arrangement which rendered France and
Belgium next door neighbours in the Crystal Palace, as they are when at home, suggests
a question which the minister of commerce would be rather puzzled to answer.

Between France and Belgium there is a war of custom-houses and an interchange of
smugglers, chiefly in the shape of large dogs, which carry Belgian tobacco and lace into
France, and bring back French silk or some such article. Every French douanier is
provided with a thick volume of instructions on the art of stopping, seizing, detecting,
poisoning, and shooting Belgian smuggler dogs. Nevertheless, day and night—especially
at night—large packs of contraband hounds, heavily laden, rush past the bewildered
officers. Now, when Belgium was part of the French empire, its manufactures, its coal,
its cattle, its corn, were all freely admitted into France; nothing was taxed, nothing was
prohibited; since the disjunction everything that is not taxed is prohibited, and yet the
line of division between the two countries is purely imaginary, and the people who, under
Napoleon, were free to interchange their goods, must have had just the same wants
the day after the custom-house division made it unlawful as the day before. Why, then,
was interchange useful before Napoleon's last campaign, and baneful after his dethrone-
ment? But to begin our walk through the Belgian territory in the Crystal Palace. We
first entered the southern bay, where we found a varied display of textiles of every
kind, which seemed very little visited by the curious crowd, although, no doubt, our
manufacturers in the same line gave them a close examination. There we also found
the cheap mixed fabrics of woollen and cotton, the fine kerseymeres in which the Bel-
gians can undersell our Gloucestershire and West of England men; also capital stout
canvass and. damask linen from districts of Flanders which grew flax and wove linen
long before Belfast was founded; printed silk handkerchiefs in praise of which nothing
could be said, and woollen shawls of very dull, dowdy patterns. In this department
almost every kind of woollen and mixed woollen was to be found. The sides of the next
section were hung with carpets from the Royal Belgian Manufactory of Tournai, which,
like the French Gobelins and Beauvais manufactories, is carried on with government
money. An imposing stand of arms next attracted our attention, evincing the warlike
disposition of the people; then we passed through a vast collection of saddlery articles,
of boots also and of shoes, and of sportsmanlike gaiters for the service of those who shoot
in woodland districts. The collection of arms was chiefly furnished by Liege, and pre-
sented specimens of the commonest Brummagem, as well as of the most expensive and
finished article, both military and sporting. Rifles, too, were there of the Swiss fashion,
over which a paper was affixed, stating that one of the rifles, fired from a rest, at a mark