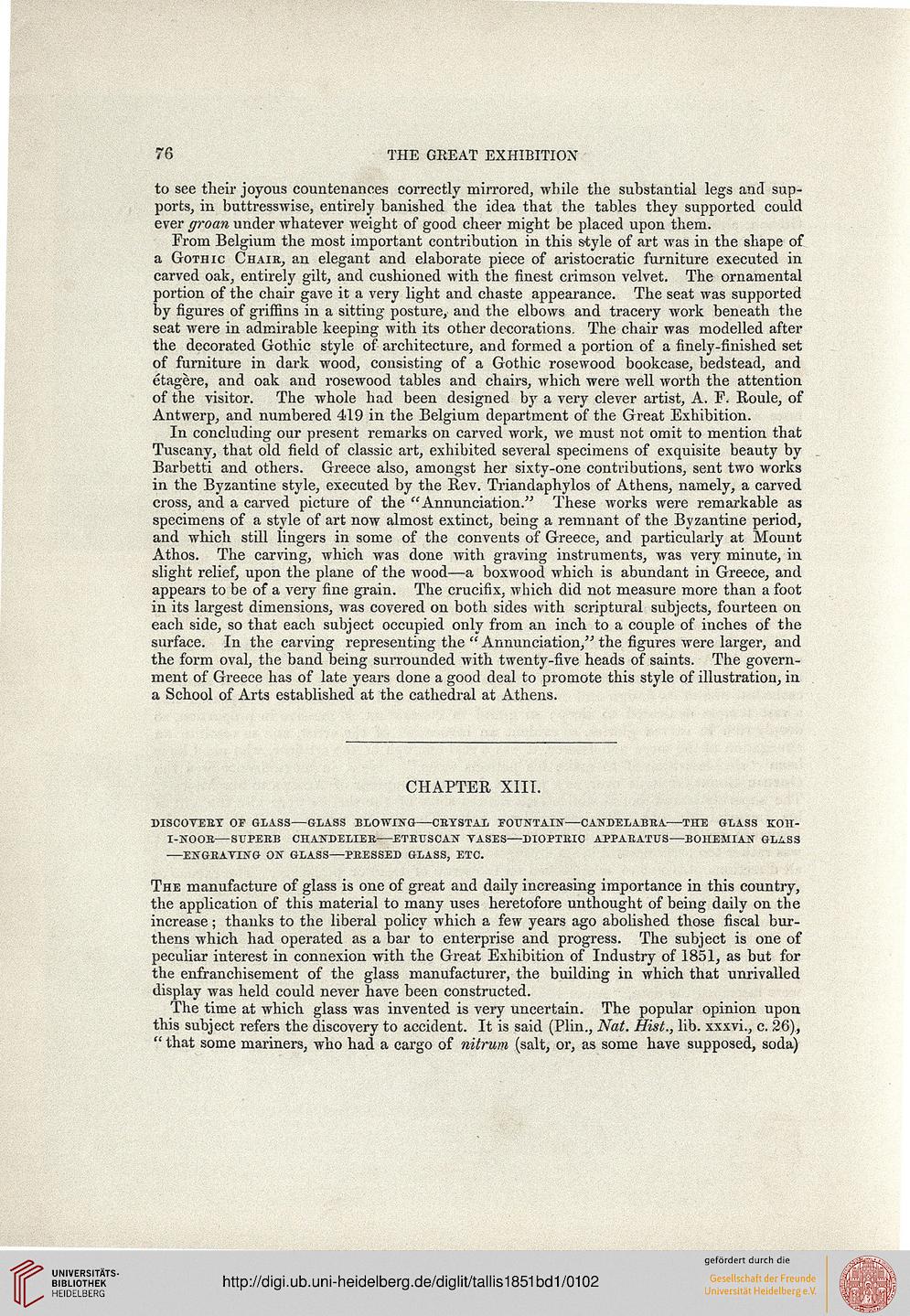 to see their joyous countenances correctly mirrored, while the substantial legs and sup-
ports, in buttresswise, entirely banished the idea that the tables they supported could
ever groan under whatever weight of good cheer might be placed upon them.

From Belgium the most important contribution in this style of art was in the shape of
a Gothic Chair, an elegant and. elaborate piece of aristocratic furniture executed in
carved oak, entirely gilt, and cushioned with the finest crimson velvet. The ornamental
portion of the chair gave it a very light and chaste appearance. The seat was supported
by figures of griffins in a sitting posture, and the elbows and tracery work beneath the
seat were in admirable keeping with its other decorations. The chair was modelled after
the decorated Gothic style of architecture, and formed a portion of a finely-finished set
of furniture in dark wood, consisting of a Gothic rosewood bookcase, bedstead, and
etagere, and oak and rosewood tables and chairs, which were well worth the attention
of the visitor. The whole had been designed by a very clever artist, A. E. Roule, of
Antwerp, and numbered 419 in the Belgium department of the Great Exhibition.

In concluding our present remarks on carved work, we must not omit to mention that
Tuscany, that old field of classic art, exhibited several specimens of exquisite beauty by
Barbetti and others. Greece also, amongst her sixty-one contributions, sent two works
in the Byzantine style, executed by the Bev. Triandaphylos of Athens, namely, a carved
cross, and a carved picture of the "Annunciation." These works were remarkable as
specimens of a style of art now almost extinct, being a remnant of the Byzantine period,
and which still lingers in some of the convents of Greece, and particularly at Mount
Athos. The carving, which was done with graving instruments, was very minute, in
slight relief, upon the plane of the wood—a boxwood which is abundant in Greece, and
appears to be of a very fine grain. The crucifix, which did not measure more than a foot
in its largest dimensions, was covered on both sides with scriptural subjects, fourteen on
each side, so that each subject occupied only from an inch to a couple of inches of the
surface. In the carving representing the " Annunciation," the figures were larger, and
the form oval, the band being surrounded with twenty-five heads of saints. The govern-
ment of Greece has of late years done a good deal to promote this style of illustration, in
a School of Arts established at the cathedral at Athens.

The manufacture of glass is one of great and daily increasing importance in this country,
the application of this material to many uses heretofore unthought of being daily on the
increase; thanks to the liberal policy which a few years ago abolished those fiscal bur-
thens which had operated as a bar to enterprise and progress. The subject is one of
peculiar interest in connexion with the Great Exhibition of Industry of 1851, as but for
the enfranchisement of the glass manufacturer, the building in which that unrivalled
display was held could never have been constructed.

The time at which glass was invented is very uncertain. The popular opinion upon
this subject refers the discovery to accident. It is said (Plin., Nat. Hist., lib. xxxvi., c. 26),
" that some mariners, who had a cargo of nitrum (salt, or, as some have supposed, soda)