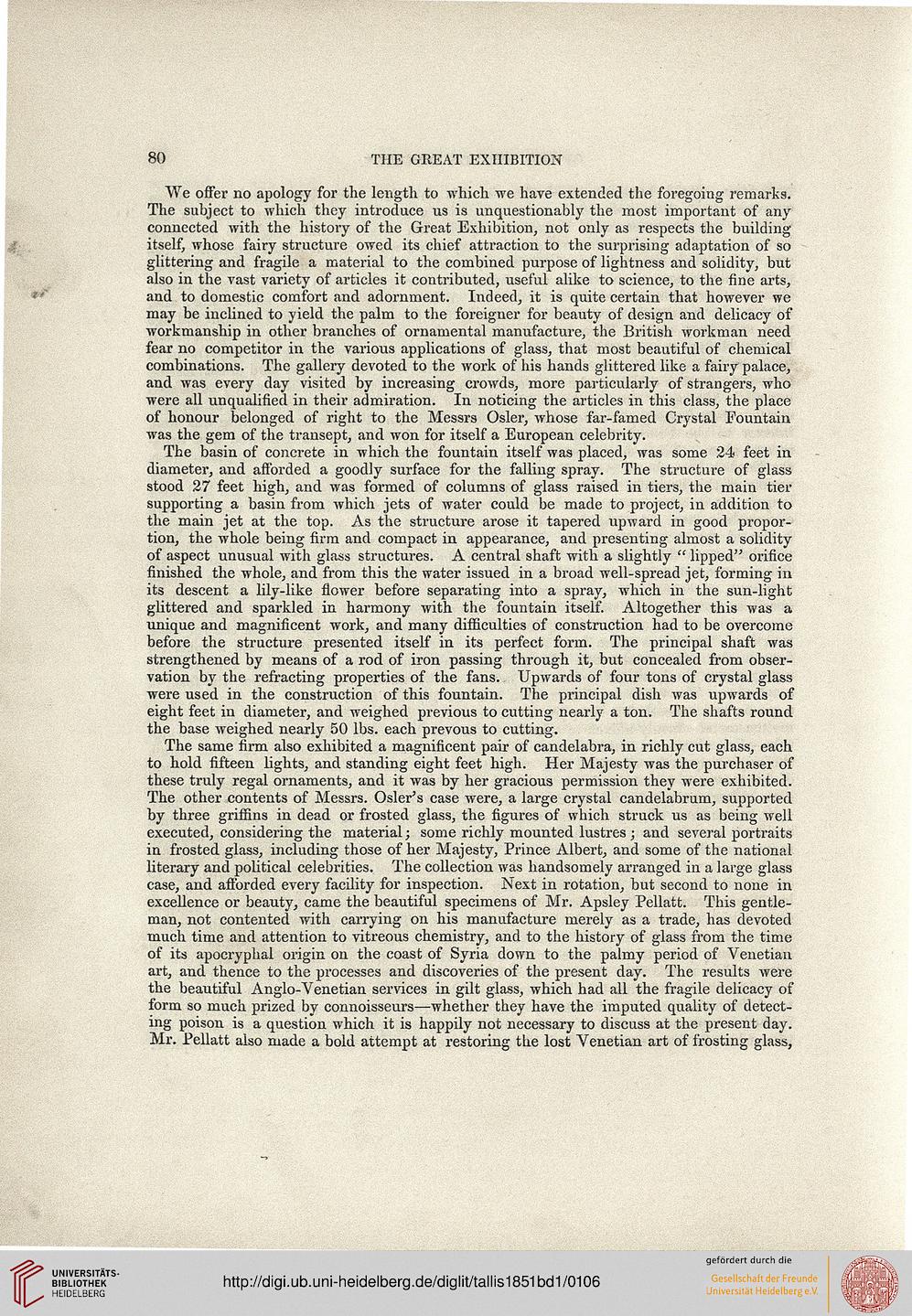 We offer no apology for the length to which we have extended the foregoing remarks.
The subject to which they introduce xis is unquestionably the most important of any
connected with the history of the Great Exhibition, not only as respects the building
itself, whose fairy structure owed its chief attraction to the surprising adaptation of so
glittering and fragile a material to the combined purpose of lightness and solidity, but
also in the vast variety of articles it contributed, useful alike to science, to the fine arts,
and to domestic comfort and adornment. Indeed, it is quite certain that however we
may be inclined to yield the palm to the foreigner for beauty of design and delicacy of
workmanship in other branches of ornamental manufacture, the British workman need
fear no competitor in the various applications of glass, that most beautiful of chemical
combinations. The gallery devoted to the work of his hands glittered like a fairy palace,
and was every day visited by increasing crowds, more particularly of strangers, who
were all unqualified in their admiration. In noticing the articles in this class, the place
of honour belonged of right to the Messrs Osier, whose far-famed Crystal Fountain
was the gem of the transept, and won for itself a European celebrity.

The basin of concrete in which the fountain itself was placed, was some 24 feet in
diameter, and afforded a goodly surface for the falling spray. The structure of glass
stood 27 feet high, and was formed of columns of glass raised in tiers, the main tier
supporting a basin from which jets of water could be made to project, in addition to
the main jet at the top, As the structure arose it tapered upward in good propor-
tion, the whole being firm and compact in appearance, and presenting almost a solidity
of aspect unusual with glass structures. A central shaft with a slightly " lipped" orifice
finished the whole, and from this the water issued in a broad well-spread jet, forming in.
its descent a lily-like flower before separating into a spray, which in the sun-light
glittered and sparkled in harmony with the fountain itself. Altogether this was a
unique and magnificent work, and many difficulties of construction had to be overcome
before the structure presented itself in its perfect form. The principal shaft was
strengthened by means of a rod of iron passing through it, but concealed from obser-
vation by the refracting properties of the fans. Upwards of four tons of crystal glass
were used in the construction of this fountain. The principal dish was upwards of
eight feet in diameter, and weighed previous to cutting nearly a ton. The shafts round
the base weighed nearly 50 lbs. each prevous to cutting.

The same firm also exhibited a magnificent pair of candelabra, in richly cut glass, each
to hold fifteen lights, and standing eight feet high. Her Majesty was the purchaser of
these truly regal ornaments, and it was by her gracious permission they were exhibited.
The other contents of Messrs. Osier's case were, a large crystal candelabrum, supported
by three griffins in dead or frosted glass, the figures of which struck us as being well
executed, considering the material; some richly mounted lustres ; and several portraits
in frosted glass, including those of her Majesty, Prince Albert, and some of the national
literary and political celebrities. The collection was handsomely arranged in a large glass
case, and afforded every facility for inspection. Next in rotation, but second to none in
excellence or beauty, came the beautiful specimens of Mr. Apsley Pellatfc. This gentle-
man, not contented with carrying on his manufacture merely as a trade, has devoted
much time and attention to vitreous chemistry, and to the history of glass from the time
of its apocryphal origin on the coast of Syria down to the palmy period of Venetian
art, and thence to the processes and discoveries of the present day. The results were
the beautiful Anglo-Venetian services in gilt glass, which had all the fragile delicacy of
form so much prized by connoisseurs—whether they have the imputed quality of detect-
ing poison is a question which it is happily not necessary to discuss at the present day.
Mr. JPellatt also made a bold attempt at restoring the lost Venetian art of frosting glass,