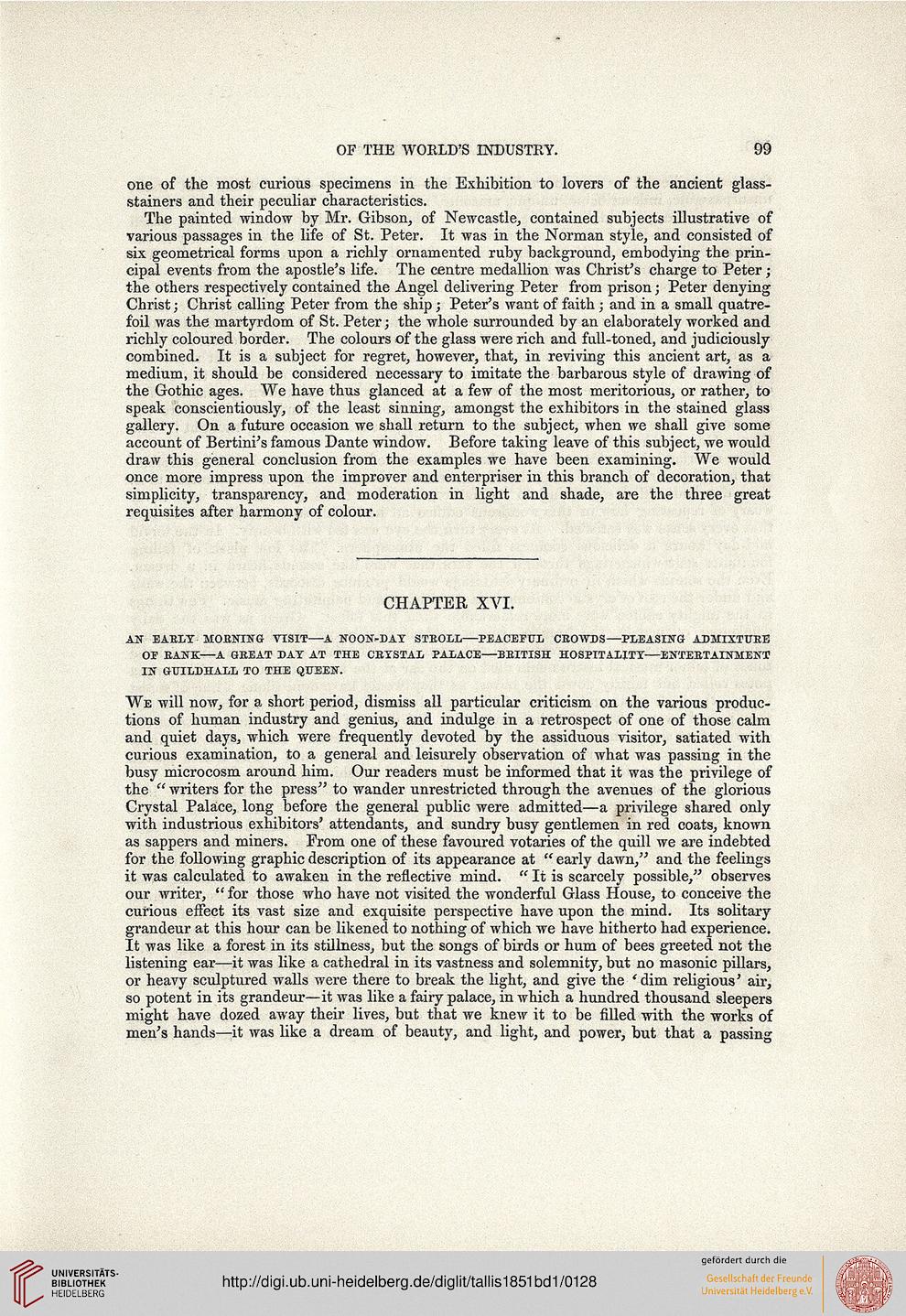 Information about OCR text
OF THE WORLD'S INDUSTRY. 99

one of the most curious specimens in the Exhibition to lovers of the ancient glass-
stainers and their peculiar characteristics.

The painted window by Mr. Gibson, of Newcastle, contained subjects illustrative of
various passages in the life of St. Peter. It was in the Norman style, and consisted of
sis geometrical forms upon a richly ornamented ruby background, embodying the prin-
cipal events from the apostle's life. The centre medallion was Christ's charge to Peter;
the others respectively contained the Angel delivering Peter from prison; Peter denying
Christ; Christ calling Peter from the ship j Peter's want of faith; and in a small quatre-
foil was the martyrdom of St. Peter; the whole surrounded by an elaborately worked and
richly coloured border. The colours of the glass were rich and full-toned, and judiciously
combined. It is a subject for regret, however, that, in reviving this ancient art, as a
medium, it should he considered necessary to imitate the barbarous style of drawing of
the Gothic ages. We have thus glanced at a few of the most meritorious, or rather, to
speak conscientiously, of the least sinning, amongst the exhibitors in the stained glass
gallery. On a future occasion we shall return to the subject, when we shall give some
account of Bertini's famous Dante window. Before taking leave of this subject, we would
draw this general conclusion from the examples we have been examining. We would
once more impress upon the improver and enterpriser in this branch of decoration, that
simplicity, transparency, and moderation in light and shade, are the three great
requisites after harmony of colour.

We will now, for a short period, dismiss all particular criticism on the various produc-
tions of human industry and genius, and indulge in a retrospect of one of those calm
and quiet days, which were frequently devoted by the assiduous visitor, satiated with
curious examination, to a general and leisurely observation of what was passing in the
busy microcosm around him. Our readers must be informed that it was the privilege of
the " writers for the press" to wander unrestricted through, the avenues of the glorious
Crystal Palace, long before the general public were admitted—a privilege shared only
with industrious exhibitors' attendants, and sundry busy gentlemen in red coats, known
as sappers and miners. From one of these favoured votaries of the quill we are indebted
for the following graphic description of its appearance at "early dawn," and the feelings
it was calculated to awaken in the reflective mind. " It is scarcely possible," observes
our writer, "for those who have not visited the wonderful Glass House, to conceive the
curious effect its vast size and exquisite perspective have upon the mind. Its solitary
grandeur at this hour can be likened to nothing of which we have hitherto had experience.
It was like a forest in its stillness, but the songs of birds or hum of bees greeted not the
listening ear—it was like a cathedral in its vastness and solemnity, but no masonic pillars,
or heavy sculptured walls were there to break the light, and give the 'dim religious' air,
so potent in its grandeur—it was like a fairy palace, in which a hundred thousand sleepers
might have dozed away their lives, but that we knew it to be filled with the works of
men's hands—it was like a dream of beauty, and light, and power, but that a passing