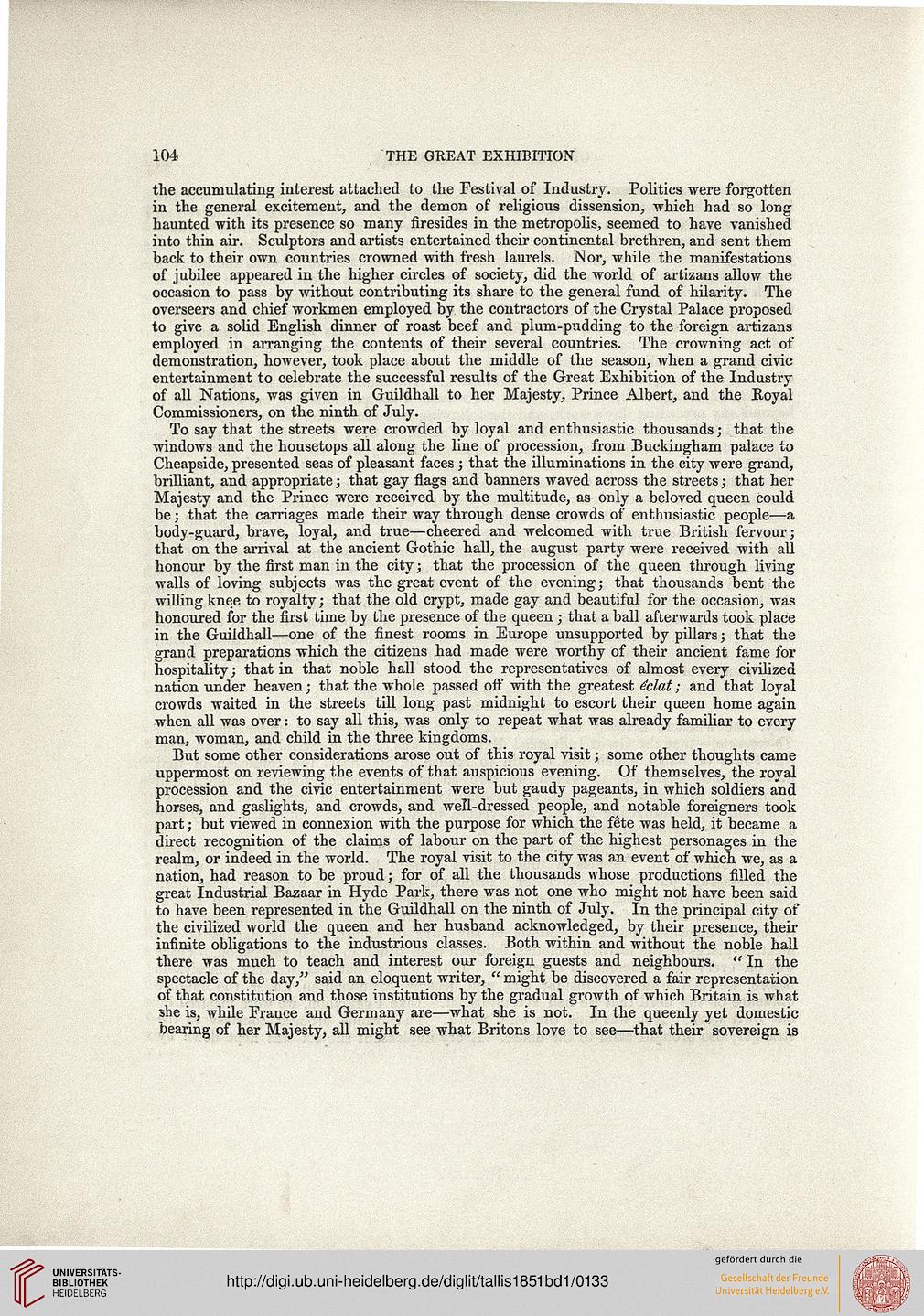 the accumulating interest attached to the Festival of Industry. Politics were forgotten
in the general excitement, and the demon of religious dissension;, which had so long
haunted with its presence so many firesides in the metropolis, seemed to have vanished
into thin air. Sculptors and artists entertained their continental brethren, and sent them
back to their own countries crowned with fresh laurels. Nor, while the manifestations
of jubilee appeared in the higher circles of society, did the world of artizans allow the
occasion to pass by without contributing its share to the general fund of hilarity. The
overseers arid chief workmen employed by the contractors of the Crystal Palace proposed
to give a solid English dinner of roast beef and plum-pudding to the foreign artizans
employed in arranging the contents of their several countries. The crowning act of
demonstration, however, took place about the middle of the season, when a grand civic
entertainment to celebrate the successful results of the Great Exhibition of the Industry
of all Nations, was given in Guildhall to her Majesty, Prince Albert, and the Eoyal
Commissioners, on the ninth of July.

To say that the streets were crowded by loyal and enthusiastic thousands; that the
■windows and the housetops all along the line of procession, from Buckingham palace to
Cheapside, presented seas of pleasant faces; that the illuminations in the city were grand,
brilliant, and appropriate; that gay flags and banners waved across the streets; that her
Majesty and the Prince were received by the multitude, as only a beloved queen could
be; that the carriages made their way through dense crowds of enthusiastic people—a
body-guard, brave, loyal, and true—cheered and welcomed with true British fervour;
that on the arrival at the ancient Gothic hall, the august party were received with all
honour by the first man in the city; that the procession of the queen through living
walls of loving subjects was the great event of the evening; that thousands bent the
willing knee to royalty; that the old crypt, made gay and beautiful for the occasion, was
honoured for the first time by the presence of the queen; that a ball afterwards took place
in the Guildhall—one of the finest rooms in Europe unsupported by pillars; that the
grand preparations which the citizens had made were worthy of their ancient fame for
hospitality; that in that noble hall stood the representatives of almost every civilized
nation under heaven; that the whole passed off with the greatest Mat; and that loyal
crowds waited in the streets till long past midnight to escort their queen home again
when all was over: to say all this, was only to repeat what was already familiar to every
man, woman, and child in the three kingdoms.

But some other considerations arose out of this royal visit; some other thoughts came
uppermost on reviewing the events of that auspicious evening. Of themselves, the royal
procession and the civic entertainment were but gaudy pageants, in which soldiers and
horses, and gaslights, and crowds, and well-dressed people, and notable foreigners took
part; but viewed in connexion with the purpose for which the fete was held, it became a
direct recognition of the claims of labour on the part of the highest personages in the
realm, or indeed in the world. The royal visit to the city was an event of which we, as a
nation, had reason to be proud; for of all the thousands whose productions filled the
great Industrial Bazaar in Hyde Park, there was not one who might not have been said
to have been represented in the Guildhall on the ninth of July. In the principal city of
the civilized world the queen and her husband acknowledged, by their presence, their
infinite obligations to the industrious classes. Both within and without the noble hall
there was much to teach and interest our foreign guests and neighbours. t( In the
spectacle of the day," said an eloquent writer, " might be discovered a fair representation
of that constitution and those institutions by the gradual growth of which Britain is what
she is, while France and Germany are—what she is not. In the queenly yet domestic
bearing of her Majesty, all might see what Britons love to see—that their sovereign is