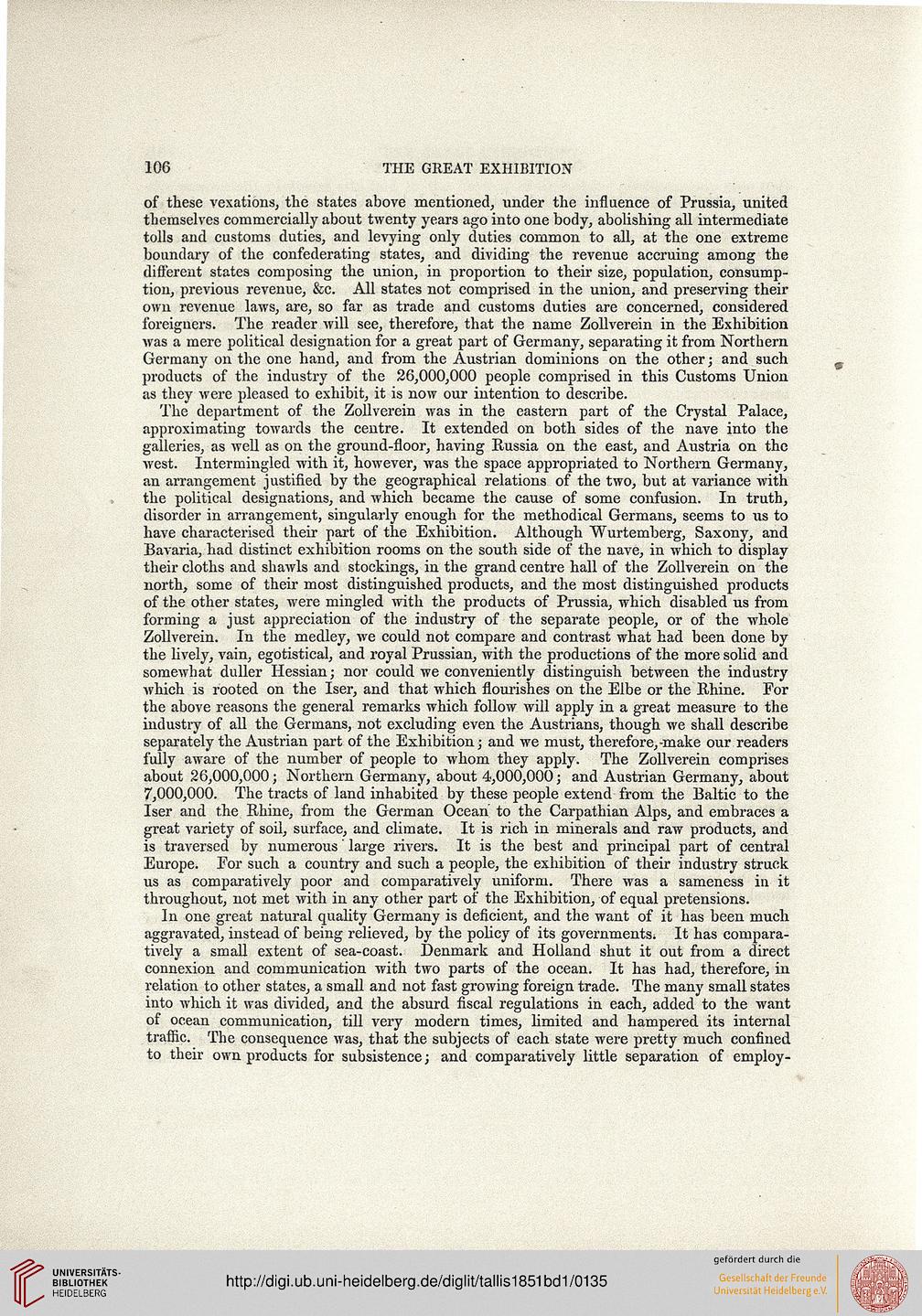 of these vexations, the states above mentioned, under the influence of Prussia, united
themselves commercially about twenty years ago into one body, abolishing all intermediate
tolls and customs duties, and levying only duties common to all, at the one extreme
boundary of the confederating states, and dividing the revenue accruing among the
different states composing the union, in proportion to their size, population, consump-
tion, previous revenue, &c. All states not comprised in the union, and preserving their
own revenue laws, are, so far as trade and customs duties are concerned, considered
foreigners. The reader will see, therefore, that the name Zollverein in the Exhibition
was a mere political designation for a great part of Germany, separating it from Northern
Germany on the one hand, and from the Austrian dominions on the other; and such
products of the industry of the 26,000,000 people comprised in this Customs Union
as they were pleased to exhibit, it is now our intention to describe.

The department of the Zollverein was in the eastern part of the Crystal Palace,
approximating towards the centre. It extended on both sides of the nave into the
galleries, as well as on the ground-floor, having Russia on the east, and Austria on the
west. Intermingled with it, however, was the space appropriated to Northern Germany,
an arrangement justified by the geographical relations of the two, but at variance with
the political designations, and which became the cause of some confusion. In truth,
disorder in arrangement, singularly enough for the methodical Germans, seems to us to
have characterised their part of the Exhibition. Although "Wurtemberg, Saxony, and
Bavaria, had distinct exhibition rooms on the south side of the nave, in which to display
their cloths and shawls and stockings, in the grand centre hall of the Zollverein on the
north, some of their most distinguished products, and the most distinguished products
of the other states, were mingled with the products of Prussia, which disabled us from
forming a just appreciation of the industry of the separate people, or of the whole
Zollverein. In the medley, we could not compare and contrast what had been done by
the lively, vain, egotistical, and royal Prussian, with the productions of the more solid and
somewhat duller Hessian; nor could we conveniently distinguish between the industry
which is rooted on the Iser, and that which flourishes on the Elbe or the Rhine. For
the above reasons the general remarks which follow will apply in a great measure to the
industry of all the Germans, not excluding even the Austrians, though we shall describe
separately the Austrian part of the Exhibition; and we must, therefore,-make our readers
fully aware of the number of people to whom they apply. The Zollverein comprises
about 26,000,000; Northern Germany, about 4,000,000; and Austrian Germany, about
7,000,000. The tracts of land inhabited by these people extend from the Baltic to the
Iser and the Rhine, from the German Ocean to the Carpathian Alps, and embraces a
great variety of soil, surface, and climate. It is rich in minerals and raw products, and
is traversed hy numerous large rivers. It is the best and principal part of central
Europe. For such a country and such a people, the exhibition of their industry struck
us as comparatively poor and comparatively uniform. There was a sameness in it
throughout, not met with in any other part of the Exhibition, of equal pretensions.

In one great natural quality Germany is deficient, and the want of it has been much
aggravated, instead of being relieved, by the policy of its governments* It has compara-
tively a small extent of sea-coast. Denmark and Holland shut it out from a direct
connexion and communication with two parts of the ocean. It has had, therefore, in
relation to other states, a small and not fast growing foreign trade. The many small states
into which it was divided, and the absurd fiscal regulations in each, added to the want
of ocean communication, till very modern times, limited and hampered its internal
traffic. The consequence was, that the subjects of each state were pretty much confined
to their own products for subsistence; and comparatively little separation of employ-