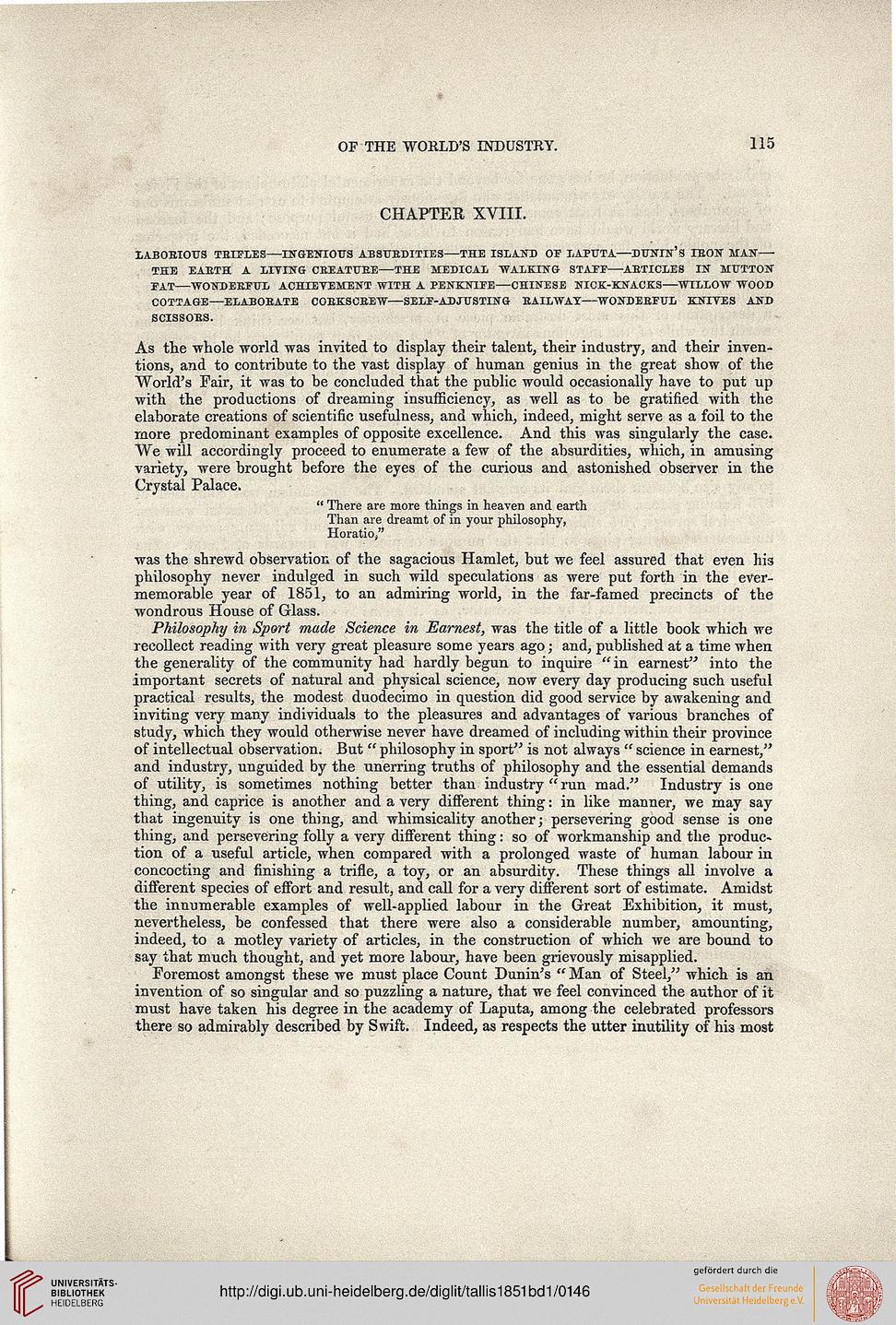 Information about OCR text
OF THE WORLD'S INDUSTRY. 115

As the whole world was invited to display their talent, their industry, and their inven-
tions, and to contribute to the vast display of human genius in the great show of the
World's Fair, it was to be concluded that the public would occasionally have to put up
with the productions of dreaming insufficiency, as well as to be gratified with the
elaborate creations of scientific usefulness, and which, indeed, might serve as a foil to the
more predominant examples of opposite excellence. And this was singularly the case.
"We will accordingly proceed to enumerate a few of the absurdities, which, in amusing
variety, were brought before the eyes of the curious and astonished observer in the
Crystal Palace.

" There are more things in heaven and earth

Than are dreamt of in your philosophy,

was the shrewd observation of the sagacious Hamlet, but we feel assured that even his
philosophy never indulged in such wild speculations as were put forth in the ever-
memorable year of 1851, to an admiring world, in the far-famed precincts of the
wondrous House of Glass.

Philosophy in Sport made Science in Earnest, was the title of a little book which we
recollect reading with very great pleasure some years ago; and, published at a time when
the generality of the community had hardly begun to inquire "in earnest" into the
important secrets of natural and physical science, now every day producing such useful
practical results, the modest duodecimo in question did good service by awakening and
inviting very many individuals to the pleasures and advantages of various branches of
study, which they would otherwise never have dreamed of including within their province
of intellectual observation. But " philosophy in sport" is not always " science in earnest,"
and industry, unguided by the unerring truths of philosophy and the essential demands
of utility, is sometimes nothing better than industry "run mad." Industry is one
thing, and caprice is another and a very different thing: in like manner, we may say
that ingenuity is one thing, and whimsicality another; persevering good sense is one
thing, and persevering folly a very different thing: so of workmanship and the produc-
tion of a useful article, when compared with a prolonged waste of human labour in
concocting and finishing a trifle, a toy, or an absurdity. These things all involve a
different species of effort and result, and call for a very different sort of estimate. Amidst
the innumerable examples of well-applied labour in the Great Exhibition, it must,
nevertheless, be confessed that there were also a considerable number, amounting,
indeed, to a motley variety of articles, in the construction of which we are bound to
say that much thought, and yet more labour, have been grievously misapplied.

Foremost amongst these we must place Count Dunin's " Man of Steel," which is an
invention of so singular and so puzzling a nature, that we feel convinced the author of it
must have taken his degree in the academy of Laputa, among the celebrated professors
there so admirably described by Swift. Indeed, as respects the utter inutility of hi3 most