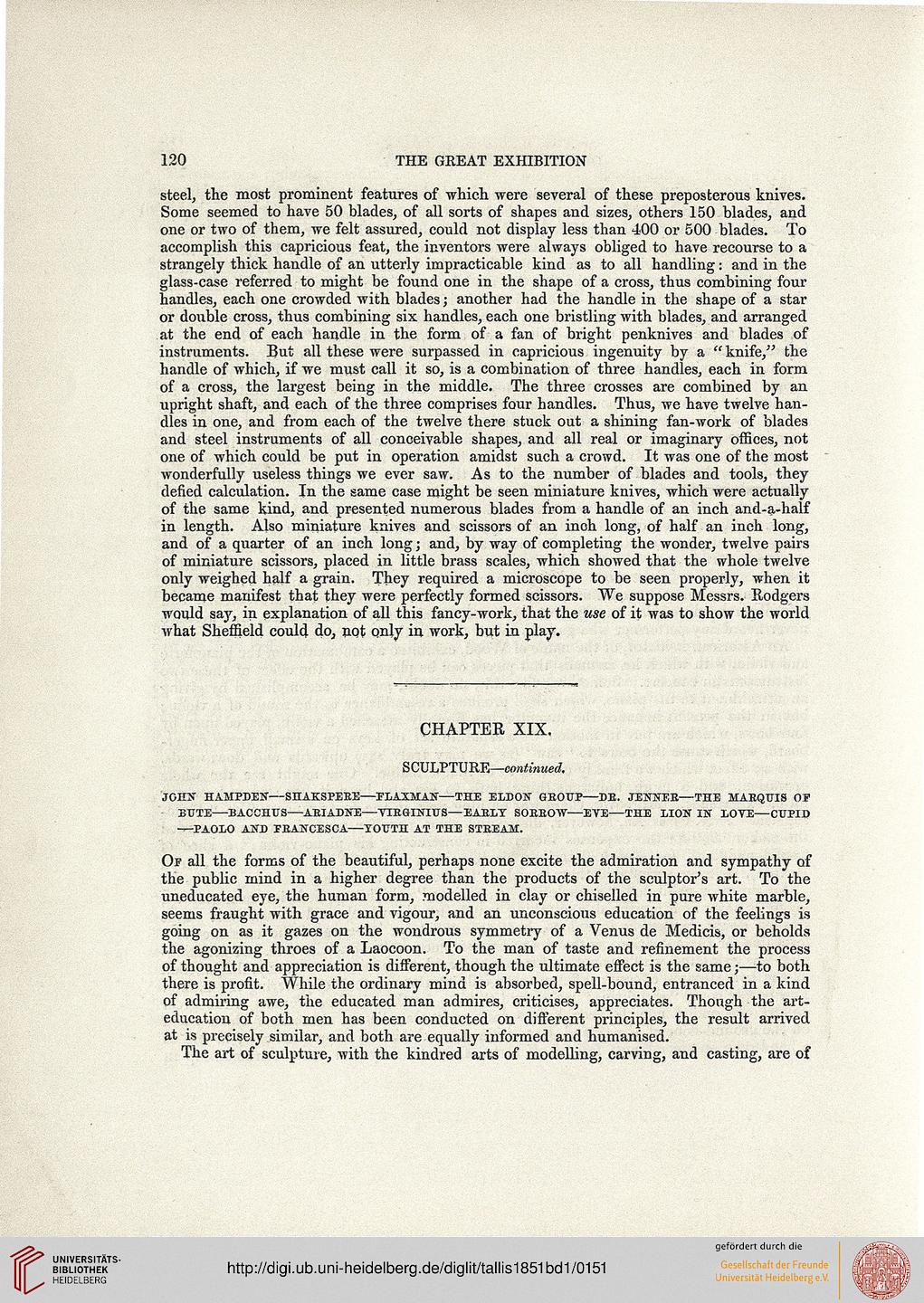 steel, the most prominent features of which were several of these preposterous knives.
Some seemed to have 50 blades, of all sorts of shapes and sizes, others 150 blades, and
one or two of them, we felt assured, could not display less than 400 or 500 blades. To
accomplish this capricious feat, the inventors were always obliged to have recourse to a
strangely thick handle of an utterly impracticable kind as to all handling: and in the
glass-case referred to might be found one in the shape of a cross, thus combining four
handles, each one crowded with blades; another had the handle in the shape of a star
or double cross, thus combining six handles, each one bristling with blades, and arranged
at the end of each handle in the form of a fan of bright penknives and blades of
instruments. But all these were surpassed in capricious ingenuity by a "knife," the
handle of which, if we must call it so, is a combination of three handles, each in form
of a cross, the largest being in the middle. The three crosses are combined by an
upright shaft, and each of the three comprises four handles. Thus, we have twelve han-
dles in one, and from each of the twelve there stuck out a shining fan-work of blades
and steel instruments of all conceivable shapes, and all real or imaginary offices, not
one of which could be put in operation amidst such a crowd. It was one of the most
wonderfully useless things we ever saw. As to the number of blades and tools, they
defied calculation. In the same case might be seen miniature knives, which were actually
of the same kind, and presented numerous blades from a handle of an inch and-a-half
in length. Also miniature knives and scissors of an inch long, of half an inch long,
and of a quarter of an inch long; and, byway of completing the wonder, twelve pairs
of miniature scissors, placed in little brass scales, which showed that the whole twelve
only weighed half a grain. They required a microscope to be seen properly, when it
became manifest that they were perfectly formed scissors. We suppose Messrs. Eodgers
would say, in explanation of all this fancy-work, that the use of it was to show the world
what Sheffield could do, not only in work, but in play.

Of all the forms of the beautiful, perhaps none excite the admiration and sympathy of
the public mind in a higher degree than the products of the sculptor's art. To the
uneducated eye, the human form, modelled in clay or chiselled in pure white marble,
seems fraught with grace and. vigour, and an unconscious education of the feelings is
going on as it gazes on the wondrous symmetry of a Venus de Medicis, or beholds
the agonizing throes of a Laocoon. To the man of taste and refinement the process
of thought and appreciation is different, though the ultimate effect is the same;—to both
there is profit. While the ordinary mind is absorbed, spell-bound, entranced in a kind
of admiring awe, the educated man admires, criticises, appreciates. Though the art-
education of both men has been conducted on different principles, the result arrived
at is precisely similar, and both are equally informed and humanised.

The art of sculpture, with the kindred arts of modelling, carving, and casting, are of