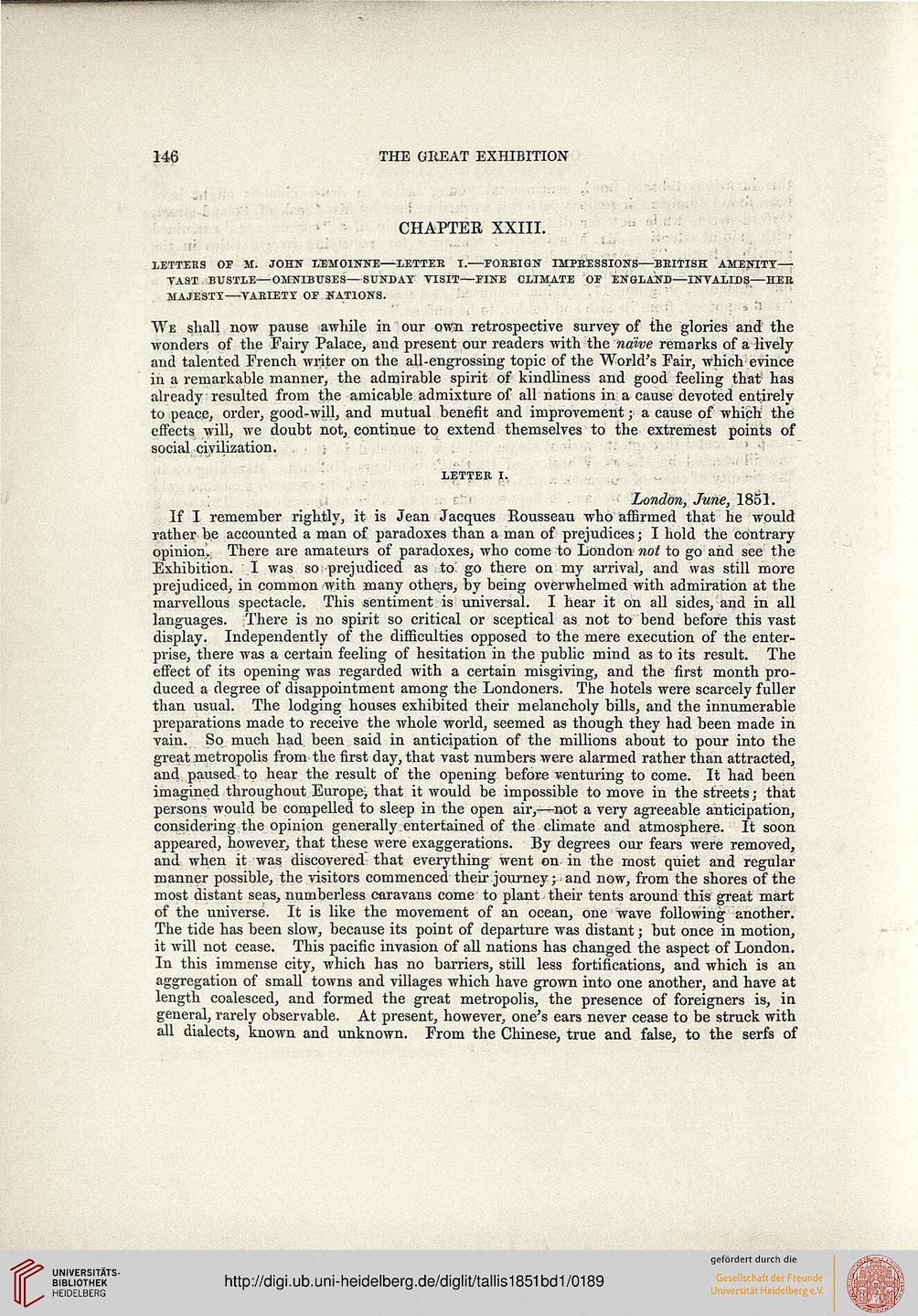 We shall now pause -awhile in our own retrospective survey of the glories and the
wonders of the Fairy Palace, and present our readers with the naive remarks of a lively
and talented French writer on the all-engrossing topic of the World's Fair, which evince
in a remarkable manner, the admirable spirit of kindliness and good feeling that has
already resulted from the amicable admixture of all nations in a cause devoted entirely
to peace, order, good-will, and mutual benefit and improvement; a cause of which the
effects will, we doubt not, continue to extend themselves to the extremest points of
social civilization. ■ \ - .'. ■'■ ' :- '.;•

London, <7ime,1851.
If I remember rightly, it is Jean Jacques Rousseau who affirmed that he would
rather be accounted a man of paradoxes than a man of prejudices; I hold the contrary
opinion. There are amateurs of paradoxes, who come to London not to go and see the
Exhibition. I was so prejudiced as to go there on my arrival, and was still more
prejudicedj in common with many others, by being overwhelmed with admiration at the
marvellous spectacle. This sentiment is universal. I hear it on all sides, and in all
languages. There is no spirit so critical or sceptical as not to bend before this vast
display. Independently of the difficulties opposed to the mere execution of the enter-
prise, there was a certain feeling of hesitation in the public mind as to its result. The
effect of its opening was regarded with a certain misgiving, and the first month pro-
duced a degree of disappointment among the Londoners. The hotels were scarcely fuller
than usual. The lodging houses exhibited their melancholy bills, and the innumerable
preparations made to receive the whole world, seemed as though they had been made in
vain. So much had. been said in anticipation of the millions about to pour into the
great metropolis from the first day, that vast numbers were alarmed rather than attracted,
and paused to hear the result of the opening before venturing to come. It had been
imagined throughout Europe, that it would be impossible to move in the streets; that
persons would be compelled to sleep in the open airy—not a very agreeable anticipation,
considering the opinion generally entertained of the climate and atmosphere. It soon
appeared, however, that these were exaggerations. By degrees our fears were removed,
and when it was discovered- that everything went on in the most quiet and regular
manner possible, the visitors commenced their journey;-and now, from the shores of the
most distant seas, numberless caravans come to plant their tents around this great mart
of the universe. It is like the movement of an ocean, one wave following another.
The tide has been slow, because its point of departure was distant; but once in motion,
it will not cease. This pacific invasion of all nations has changed the aspect of London.
In this immense city, which has no barriers, still less fortifications, and which is an
aggregation of small towns and villages which have grown into one another, and have at
length coalesced, and formed the great metropolis, the presence of foreigners is, in
general, rarely observable. At present, however, one's ears never cease to be struck with
all dialects, known and unknown. From the Chinese, true and false, to the serfs of